Dr. Tesla Says Two of Four Necessary Pieces of Apparatus Have Been Built

Amplifying his birthday anniversary announcement of the prospective invention of an electrical death-ray, or force beam, that would make any country impregnable in time of war, Dr. Nikola Tesla says that two of the four pieces of necessary apparatus already have been constructed and tested.

Four machines combine in the production and use of this destructive beam, which, according to Dr. Tesla would wipe out armies, destroy airplanes and level fortresses at a range limited only by the curvature of the earth. These four are:

First, apparatus for producing manifestations of energy in free air instead of in a high vacuum as in the past. This, it is said, has been accomplished.

Second, the development of a mechanism for generating tremendous electrical force. This, too, Dr. Tesla says, has been solved. The power necessary to achieve the predicted results has been estimated at 50,000,000 volts.

Third, a method of intensifying and amplifying the force developed by the second mechanism.

Fourth, a new method for producing a tremendous electrical repelling force. This would be the projector, or gun of the invention.

While the latter two elements in the plan have not yet been constructed, Dr. Tesla speaks of them as practically assured. Owing to the elaborate nature of the machinery involved, he admits it is merely a defense engine, though battleships could be equipped with smaller units and thus armed could sweep the seas.

In addition to the value of this engine for destruction in time of war, Dr. Tesla said it could be utilized in peace for the transmission of power. He had not developed ideas for receiving apparatus capable of transforming the destructive beam into work units, but considered this merely a matter of detail. No suggestion was made of what might happen if an enemy power obtained possession of one of these receiving outfits, and when attacked by the destructive beam simply put it to work in factories manufacturing munitions or uniforms.

Another addition to the anniversary message of the famous inventor was a positive declaration that he expected soon to construct apparatus that would disprove the theories of modern astronomers that the sun gradually was cooling off and eventually the earth would be unable to sustain life, as it would grow too cold. 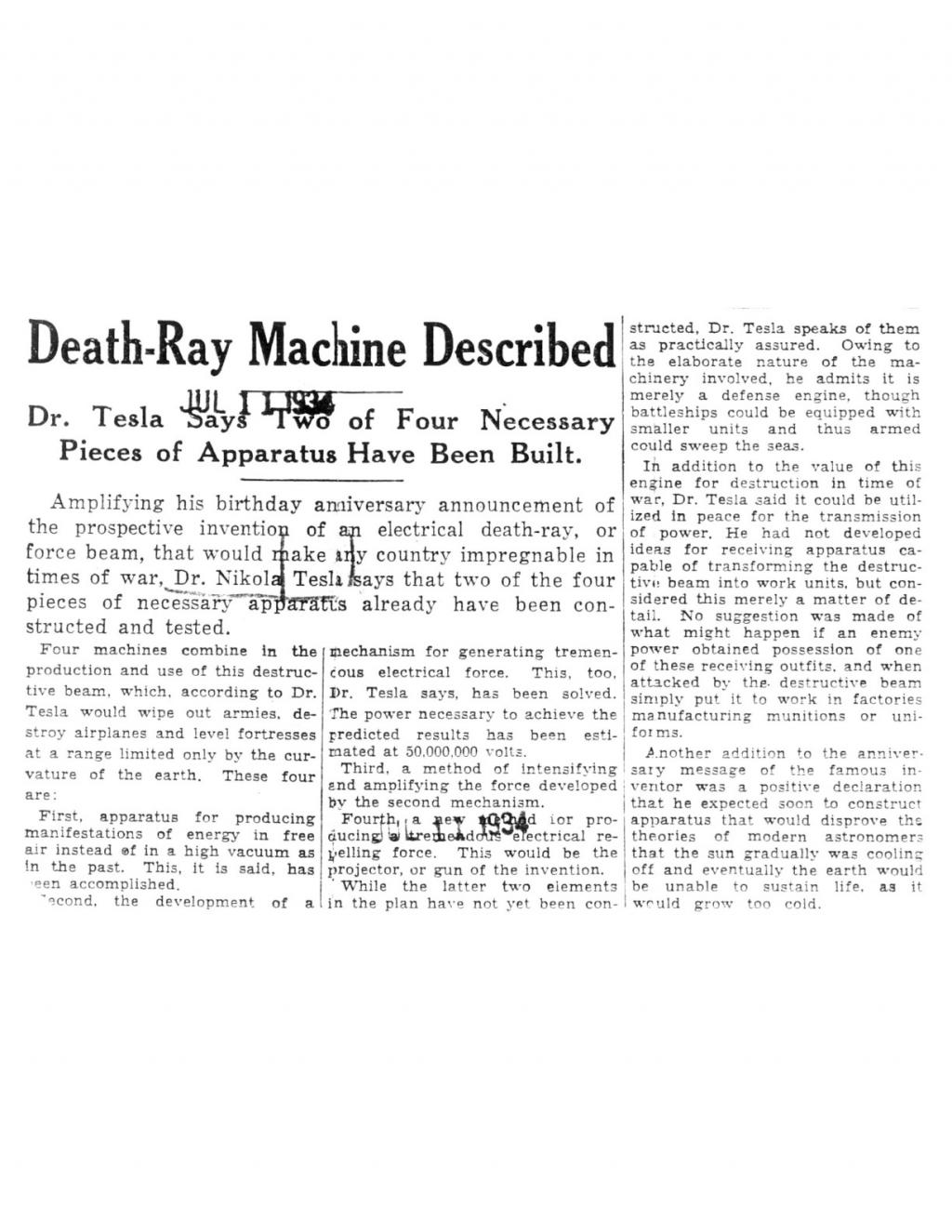