Nikola Tesla, electrical inventor, was 75 years old today. He was presented with a volume containing letters of felicitation and congratulation from about one hundred inventors and scientists all over the world.

Tesla has left behind him three quarters of a century of high achievement, says the Associated Press, being generally considered the father both of radio and of modern power generation and transmission, but it is in the fourth quarter he expects to do his greatest work.

Doubt About His Birthday.

Persons arranging for the presentation ceremony were a little doubtful for a time whether it should be held today or yesterday, as the inventor has sometime jokingly told his friends that since he was born on the stroke of midnight he didn't know which day was his birthday. They finally decided, however, that July 10 was the proper date.

Tesla was born in Serbia, coming here as a young man and obtaining his first job in America with Thomas A. Edison. Soon, however, he founded his own company, and in 1888 he sold to Westinghouse a series of patents that revolutionized the electrical industry.

Since then he always has worked independently, delving deep into the mysteries of the earth's energy and delivering his findings to the peoples of the earth. He early became an authority on power and played a large part in the harnessing of Niagara Falls and many other large power projects. Later, he turned his attention to wireless, and on his research is based much of the developed art now known as radio.

A tall, thin man with angular features and graying hair who carries his years as lightly as most men of 50, he is working on power again now, power of great strength from some source he is not yet ready to divulge. He is nearing the end of a road he has been traveling for more than a quarter of a century and he expects his labor to bear fruit that will be his greatest triumph.

“I am naturally anxious to give the facts to the world as soon as possible,” he said, “but I also wish to present them in a finished form. That may take a few months or a few years.”

So far, he said, he has proved his theories concerning the hitherto untapped source of immense power by experiments, and he was confident that calculations based on these experiments would prove true.

“If so,” he continued, “then a new source of power, available at every point of the globe, in amounts practically unlimited, will be opened up.”

Tesla, looks on his latest work as a lasting monument which will carry his name proudly down the ages after he is gone.

“I have been wonderfully fortunate,” he says, “in the evolution of new ideas, and the thought that a number of them will be remembered by posterity makes me happy indeed. I am confident that my rotating field and induction motor and the wireless system I have given to the world will live long after I have gone. Nevertheless it seems to me my latest discoveries will be considered the most important.” 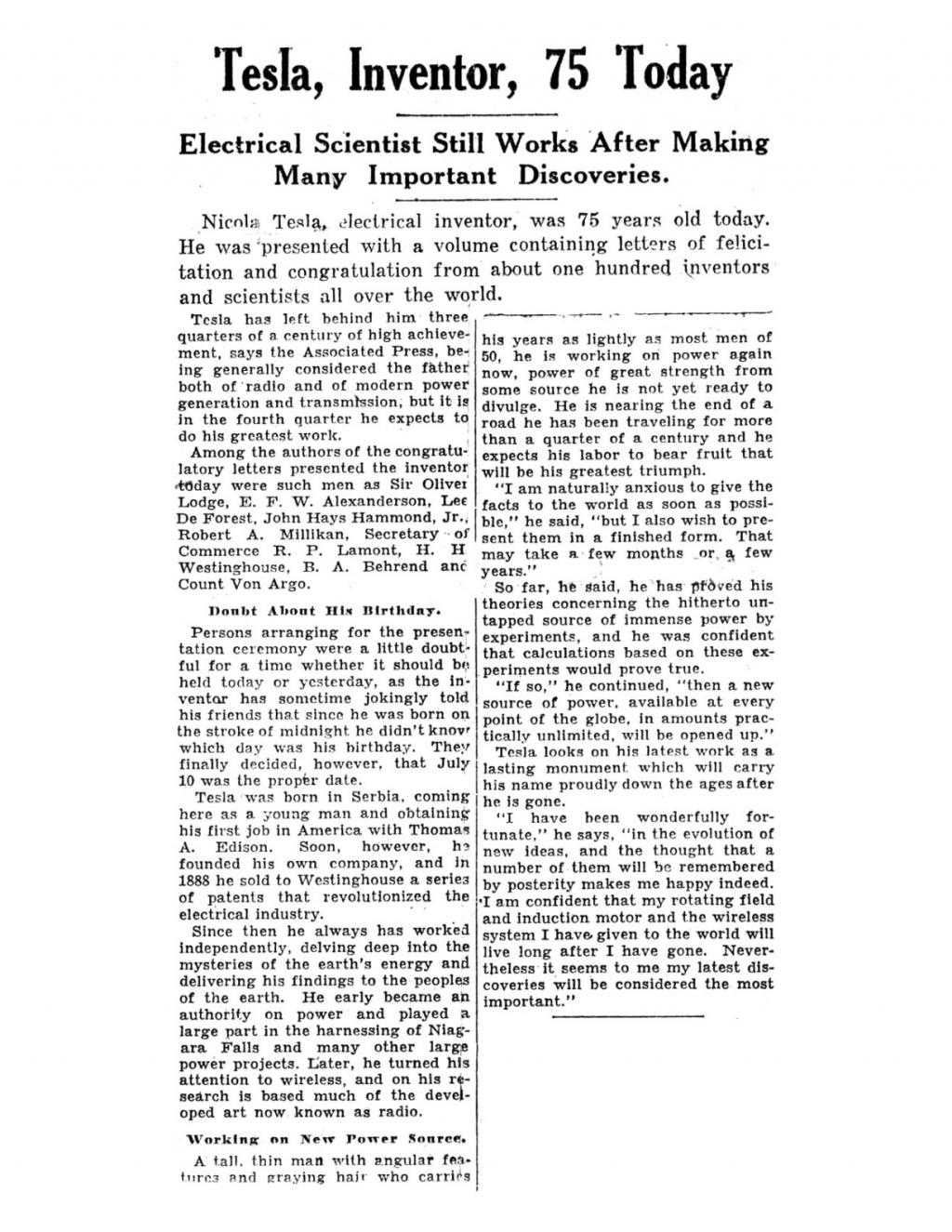