Belgrade, Aug. 16. — Nikola Tesla, who, just before his seventy-fifth birthday announced in America a new invention which he expects to revolutionize power production, narrowly escaped on several occasions a premature end to his scientific career.

His father was an Orthodox priest, and his mother the sister of an Orthodox bishop. They wanted him to become a priest. At one time he seemed likely to become an invalid. Later he ran away from his university and settled down as an engineer's assistant at sixty florins a month.

All this has been revealed here by Prof. Kosta Kulishich, who was Tesla's roommate when they were both Studying together at Gratz, Austria. Tesla and Prof. Michael Pupin are the American-Jugoslavs regarded here as having brought the greatest honor to the race.

The inventor was born at Smilyana, in Croatia, which was then ruled by the Hapsburgs. He studied in the German primary school of the village, and was later sent to higher schools. After he finished high school his health was so bad that he was forced to remain at home for two years. It was after this period that his father asked him to study theology. Tesla refused, saying that he wished to become a teacher of physics. Because of his ill health his wishes were granted, and he matriculated at the technical faculty in Gratz.

Made ‘Whoopee’ on Coffee.

He and Prof. Kulishich, then a student of philosophy, became acquainted as members of the student society Serbia, and decided to room together in order to reduce their expenses. At first Tesla was very studious. His professors praised him for this, and the jealousy of other students was aroused. One day, when he was loitering in the halls of the college building, a German student slapped him on the back and said:

“You are wasting your time here. It would be better for you to go home and sit and study, so that your professors could praise you more.”

“I know I can study better than you, but I'll show you that I can also be better at having a good time,” Tesla said. The Serbian word he used is almost the equivalent of “making whoopee.”

This usually includes a certain amount of drinking, but Tesla drank nothing but coffee. He began to stay late at the Botanical Garden, the students' favorite coffee house, playing cards, billiards and chess. His skill was such that a crowd always gather round to watch when he was playing.

Even during this period, however, he seldom missed a lecture, which is a rare record in Continental universities, where students may miss as many as they like.

On Sunday mornings, when the roommate lay late in bed, Tesla would pester Prof. Kulishich with questions about electrical matters. The roommate, who was interested in philosophy, never understood these conversations, although they continued every Sunday.

Tesla's cafe activities did prevent him from studying, but he failed to pass his examinations as soon as he had been expected to. Cousins who had been sending him money, therefore, withdrew their aid. Tesla feared that his parents would do the same, and disappeared. Friends searched everywhere for him, and decided that he had drowned in the river.

His roommate discovered him by chance, thus probably preventing a great loss to science. Prof. Kulishich tells of the discovery as follows:

“Petar Resh, the director of the commercial school at Maribor, advertised for a teacher of geography and Italian. I went to Maribor to apply for the job. Passing by a cafe, I saw Tesla playing cards with two men.

“‘Where have you been, Tesla,’ I asked, ‘We have been searching for you everywhere.’

“‘I am satisfied with my present position,’ he said. ‘I am working for an engineer and earning sixty florins a month.’

“‘But you must return to Gratz and resume your polytechnical studies.’

“‘Well, we shall see about that,’ said Tesla.

“I informed his family, and his father went to Maribor and persuaded him to study somewhere else. Tesla went to Prague, where he passed with the highest marks.”

The inventor tried teaching for a year, but did not like it. He got a job in Budapest with a state telephone service, and there made his first invention, a device to increase the sound of the voice in the telephone receiver. Then he went to Paris, with the Continental Edison Company.

This resulted in his going to America. He found an improvement in the electric dynamo, and this was reported to Thomas A. Edison. The American genius was skeptical, because of Tesla's youth, but said that if he would prove his claims in New York he would receive $100,000. Tesla went at once, and succeeded so well that Edison paid him $70,000, and gave him a position in his laboratory.

The two men could not agree, however, and in 1885 Tesla founded his own company. His subsequent achievements in the electrical field are well known.

The chance which led to his discovery of the rotary magnetic field is probably not so well known, as Tesla seldom talks of his life or work.

His first home in America was a garden which Tesla decorated, in the continental fashion, with colored glass balls on sticks. Children broke in and stole the balls, so Tesla replaced them with metal ones. The stealing continued, however, so Tesla ordered his gardener to bring them into the house every night.

One evening the servant placed several balls on a transformer and was startled to see them move. He rushed to tell Tesla, who began investigations which revealed the rotary magnetic field.

His inability to get along with Edison may have been due to an independence of nature which asserted itself in his student days, and probably led to one of his inventions. When he was studying at Gratz the Gramov dynamo had just been introduced. A professor, discussing it for the benefit of the students, declared that it could not work without brushes and accumulators. Tesla asserted that it could and refused to yield to academic authority. Later he invented the brushless dynamo. 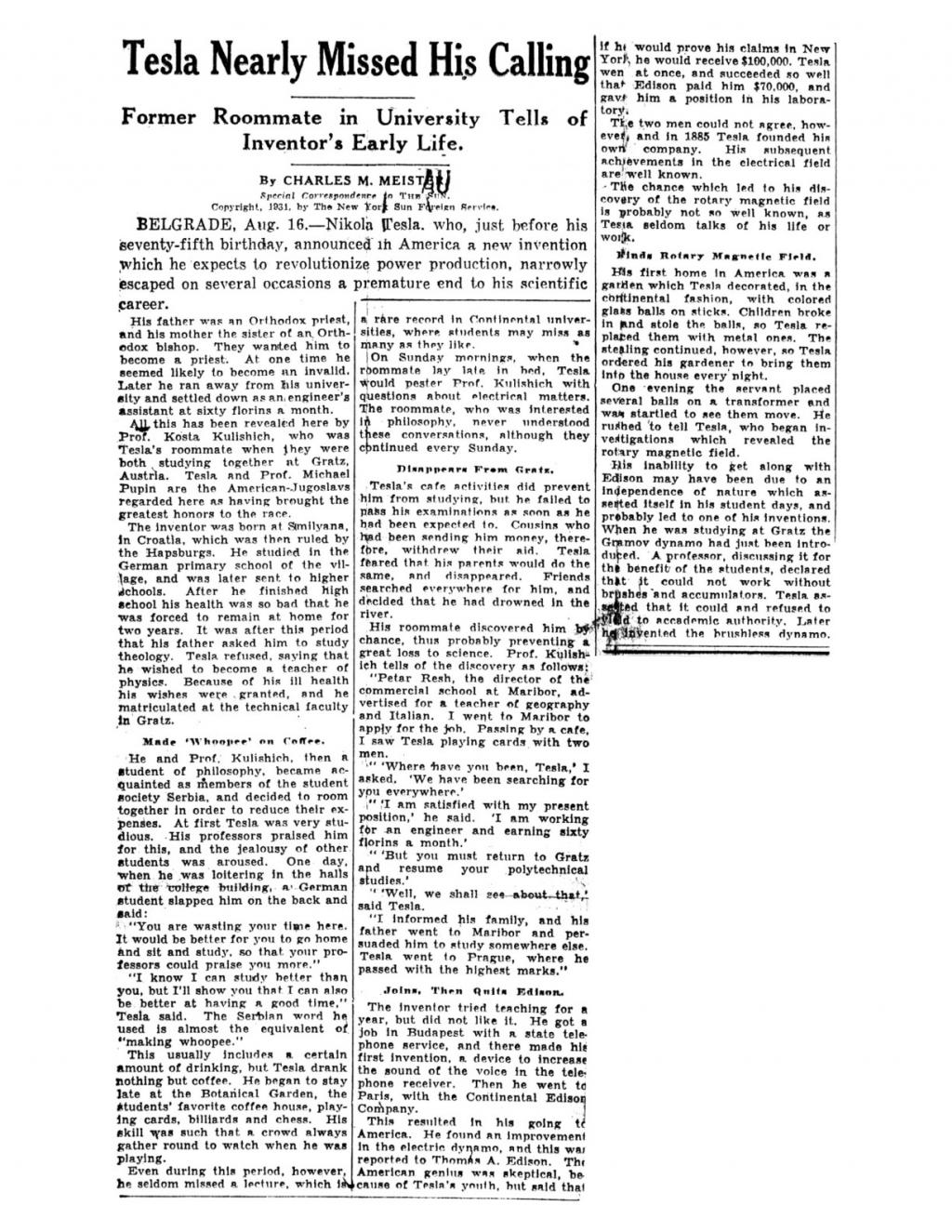