Ever since Nikola Tesla began experimenting with the high frequency currents which bear his illustrious name, the world has stood aghast at the many and wonderful effects made possible only by his discoveries.

Most of our readers are no doubt familiar with nearly all high frequency “stunts,” emanating either from the stage or from the laboratory, and not much that is new can be written upon the subject.

But not so long ago the writer, while waiting for an electric train out on Long Island, amusedly watched two boys who took turns in jumping upon a live third rail, carrying 500 volts. They would jump upon the rail with both feet at once, and then balanced themselves upon the rail. There is, of course, no danger to this as long as both feet are on the rail. One foot on the rail with the other foot on the ground means certain death. The explanation, as most of our readers know, is that when you stand on the rail with both feet, there is no return circuit. The body in this case takes on a charge of 500 volts, which, however, is not felt at all by the experimenter, the same as you are not conscious that over 14 pounds of weight are pressing down upon your body on every square inch of you at all times, due to atmospheric pressure.

This made the writer wonder what would happen if you stood on one pole of a very powerful Tesla coil. In a recent conversation with Dr. Nikola TesIa, the inventor pointed out that he had indeed performed many such experiments in his Colorado laboratory many years ago. The currents which he then used were far greater and higher than those produced anywhere now. Thousands of horsepower were used by him at that time. Dr. Tesla explained that he frequently stood upon one pole of his mastodonic coils while the full current was on. Of course, he had to stand upon a metallic plate, but he had to be careful so that no sparks jumped from his body to other objects or to the ceiling. This would have meant instant electrocution. Dr. Tesla pointed out that as the human body has a certain capacity, it radiated a good deal of energy into the surrounding air. Due to the tremendous current the sensation was anything but comfortable. The current heating the blood vessels raised the bodily temperature, and the experiment for this reason alone could not be extended for any great length of time. Dr. Tesla explained that during the experiment sparks and long spark-streams would envelop his entire body. At the extremities, elbows, knees, hip bones, nose, ears, etc., the spark display was most pronounced. Streams five to ten feet long would shoot out from the extremities with a crackling noise. Due to the exceedingly high frequencies used, however, the sparks did neither sting nor burn the flesh. Mr. Nikola Tesla’s own words, his body, indeed, was enveloped in “cold fire.” Dr. Tesla also explained that during the experiments his hair would rise on end, producing the same effect as if a large static machine had been used, with the well-known result, on the hair.

The other day we endeavored to repeat Dr. Tesla’s experiments, and the illustrations shown here are the result. We called upon the Electrical Testing Laboratories of
New York, who have one of the most powerful high frequency machines in the country. Altho but a pigmy alongside of Dr. Tesla’s Colorado thunderers, the machine gives 500,000 volts and uses 20 kilowatts. The transformer is sunk into oil, and when the full load is on throws streams six to seven feet long. The noise of the tremendous sparks can be heard for blocks.

We first took a rabbit and placed him upon the metal plate of the “high” terminal of the transformer. At first he was much frightened and jumped off the plate at about 5 kilowatts. Long sparks had shot out from his nose and above his eyes and at the end of the ears. So the writer wetted the platform with water, because he thought that sparks might be jumping into the rabbit’s belly and legs which insulated the fur part of his body, giving rise to stinging sparks. An improvement was seen immediately. The rabbit now held perfectly still for about 20 seconds, taking the full charge of 20 kilowatts at 500,000 volts. Long spark streamers, four or five feet long, shot from brer’ rabbit’s nose, ears and back, and, curious to note, immediately above the eyes. Here the sparks were so hot that they singed the hair. So the writer wetted the spots above the eyes, and after that the rabbit took the full charge, never moving once for twenty seconds at a time. See Fig. 2. Altho long streamers came principally from the nose, the photograph does not show it. After awhile the rabbit seemed to enjoy the performance, and right after his séance he was as lively as ever, eating a big carrot at once. He is still well and about now.

We next wished to try a human being instead of the rabbit, but the management of the laboratory, due to possible danger, would not grant permission. It was explained that the frequency of the big machine was too low for the experiment, which had never been tried before on a human being, so we desisted. The photograph shown in Fig. 1 was made with a regulation Tesla coil of a very high frequency, but of comparatively low power. Only 1 K.W. was used. The subject, Mr. Joseph Kraus, field editor of this publication, experienced hardly any sensation worth mentioning. Only at the extremities, such as the ears and the nose, a slight prickling sensation, not at all uncomfortable, was felt. The feet were wetted with salt water to insure perfect contact.

And the value of these experiments? As Dr. Tesla points out, if these machines come into daily use, and duly invade our homes, it will be possible for us to have a dry bath, more sanitary and infinitely better than our present water baths. If the current conditions are right, the body will throw off scale, dead skin, dust and dirt particles, hurling them far from the body. For it should not be forgotten that Tesla currents travel mostly over the skin, ridding it of all impurities. But that is not all. The unquestioned therapeutical effects to the human body are of great value, not only to the muscles but to the entire nervous system. Tesla currents, by softening the arteries, make the old feel younger, and the young, younger and more aggressive, Women, particularly, should derive great benefits from their future high frequency dry baths.

To study this problem, the Federal Telegraph Company built at its plant at Palo Alto, California, a high voltage laboratory, in which it is possible to duplicate the high voltage and high frequency phenomena which have to be met with in operating a high power radio station.

The laboratory is unique in that it is capable of generating a potential to earth of a half a million volts, which is about as high as is obtainable in any of the 60-cycle high voltage laboratories of the country, and at the same time this voltage is generated at a sustained frequency of 50,000 to 100,000 cycles per second. Thus, this laboratory is the largest of its kind in the United States, and, as far as is known, the largest in the world.

Photograph No. 3 shows a corona and flash-over on a 37″ porcelain pedestal (standard 110,000 volt insulator for 60-cycle work, such as is used in electrical power transmission equipment) equipped with a “corona” or flux distributing shield. This flash-over is occurring at 234,000 volts and 51,000 cycles per second. Without the corona shield, corona will form on the metal cap of the insulator and flash-over will occur at voltages slightly less than 100,000 at a frequency of 51,000 cycles per second. 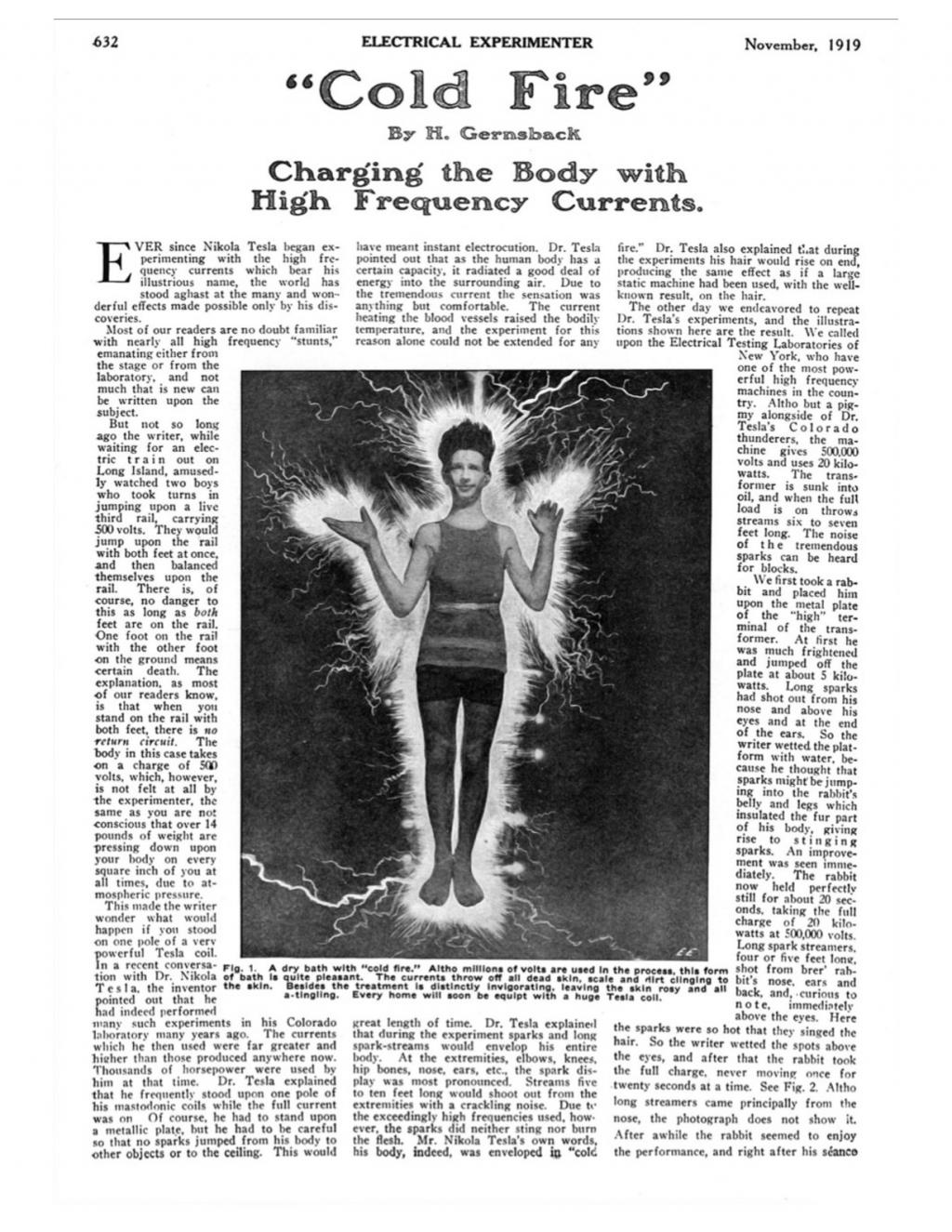