It May Do Away with Steam

An Electric Motor that Can be Driven by the Ordinary Light Wire Now In Use.

“There is no telling what will yet be accomplished by electricity,” said well-known electrician to a reporter for the Mail and Express. “Barely more than half the recent discoveries have been made known to the public. It is supposed that everything which has merit can find a market in New York. Yet as a fact this is not always the case. The invention of Nikola Tesla, a Hungarian, is a fact in point. He succeeded in producing an electrical motor which can be actually run by the refuse current now lost in the alternating system of electric lighting. Tesla worked on this motor for many years in this city, and after seeing his idea put into practical operation prepared the proper models and went to Pittsburg, Pa. There he exhibited his designs and plans to a large firm, the members of which with characteristic shrewdness bought the patent from Tesla, paying him a goodly price for it. Since then Tesla has remained in Pittsburg, being engaged in improving his invention. He deserves all the credit for what he has accomplished. He has produced a motor which some eminent electricians claimed was impracticable and unreasonable — a machine that will supersede the make and break current motors now in use.

“I suppose, like all electrical appliances, it is expensive?” he was recently asked.

“There you are entirely mistaken. Its simplicity and cheapness are remarkable. Any number of them with great capacity to do work can be attached to an electric light line if the dynamos are large enough. With two simple wires connecting the motor with the wire that supplies a common electric light, a manufacturer will have power enough to run his machinery. This simple contrivance will relegate the steam engine back to obscurity. It will be a saving in time, money and labor. The process is like using the steam from an engine after it has passed through a cylinder.”

“Is the motor bulky or heavy?”

“On the contrary, it is the opposite. The motor occupies a very small space. Its size depends on the number of horse-power. One as large as an ordinary telephone box has the power of one horse. A five-horse-power machine weighs about 150 pounds. This is a great feature as compared with the make and break motors, which as cumbersome and almost as bulky as a steam engine.”

“How is the motor formed?”

Each motor consists of a number of circular discs, one-sixteenth of an inch thick, bunched and fastened together in a series of bolts which, with eight coils of wire and an armature running through the cylinder of iron plate, comprises the entire machine. Their motion is noiseless. In this they are unlike the machine with commutators and brushes. It is capable of 4,000 revolutions a minute, but by turning a switch a short distance the speed can be cut down to three or four revolutions a minute. It is so easily applied that any business having the ordinary electric light wires running into the building, and requiring motive power of any given capacity, can use instead of a steam engine, one of these motors by simply connecting it with the incandescent light line.”

“But can this motor be brought within the reach of all?”

That is another feature of its usefulness. It is understood that these motors will be turned out, when the preparations are complete, at the rate of from $12 upward according to the number of horse-power required. This, I think, will bring them with the reach of nearly every one who will have need of such power, and will do away with many of the unsafe steam boilers now used in small factories.” 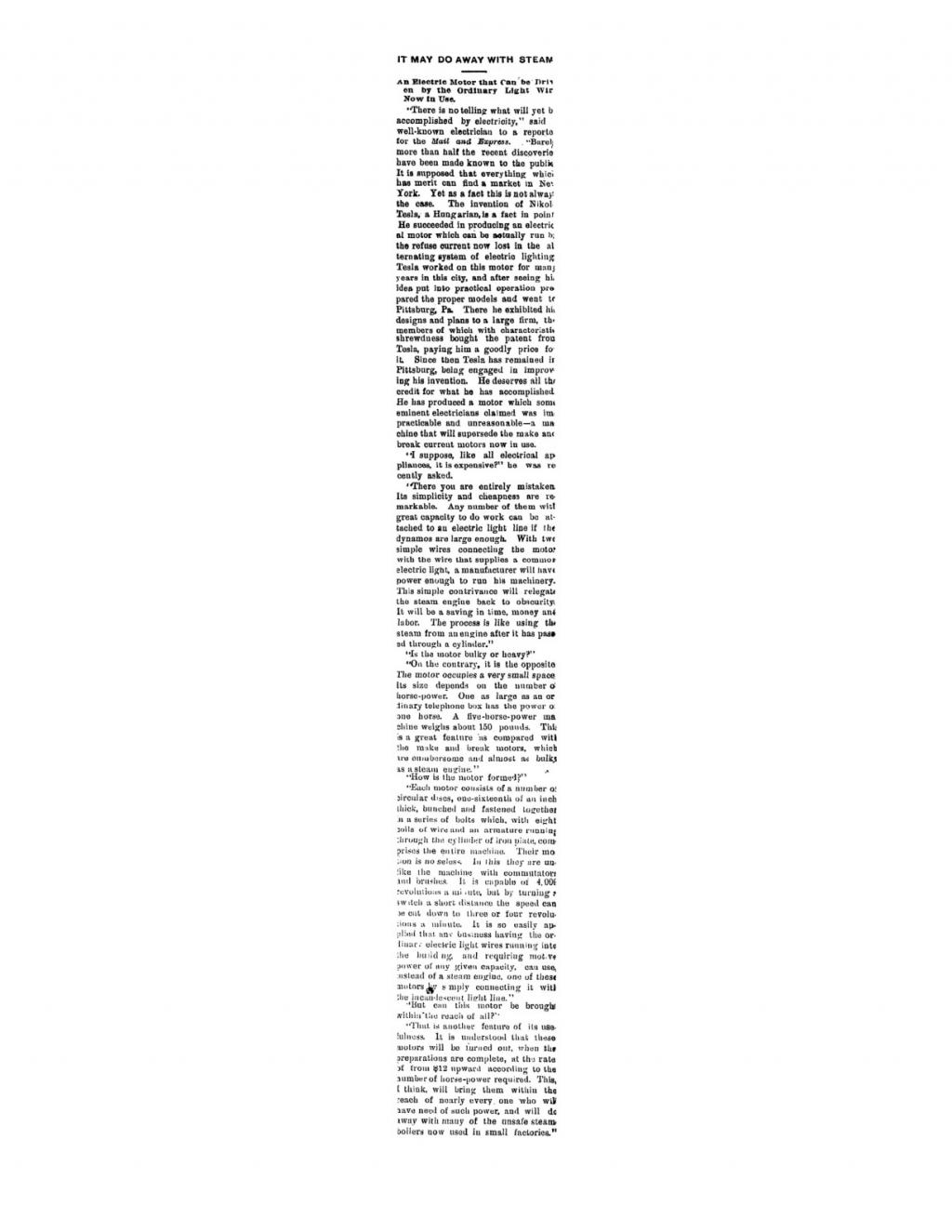