New Tesla Electric Company Has Made Them Propositions.

COST TO BE MUCH REDUCED.

After the Eagle Was Published Last Night the Promoters of the New Enterprise Were Deluged With Applications for Stock From Would-Be Investors — Machinery Involving New Ideas to Be Built.

Further information in regard to the Kinds County Electric Light and Power Company shows that this new factor in Brooklyn's industrial world is more important that was at first believed. The account in the Eagle created considerable interest in financial and business circles and only a short time after the paper was on the street the demand for stock in the new company began and the offices of the concern were burdened with applications for information. It should be said right here for the benefit of would be investors, that every cent of stock has been contributed and shares cannot be cought at any price, according to the statement of those in authority. As stated before, Mr. Cooper is nominally the president at present, but in about ten days the directors of the company will elect the officers and in six months the concern will, it is said, be at work supplying power and light, for which they already have more orders than they can possibly take care of for some time.

All the local railroads are greatly interested in the outcome of the new electric company's experiments here and it is more than possible that every one of them will be supplied with power by the new company. Negotiations to this effect have been conducted with Presidents Rosslter, Johnson, Heins and Sullivan of the trolley roads and also with Presidents Uhlmann and Joardan of the Brooklyn and Kings County Elevated Companies, which are to change their motive power to electricity this fall. One of the largest holders in the new electrical company said to-day that all of the railroad presidents had considered the scheme with favor and if the Tesla inventions prove to be all that is claimed for them and the prices are as low as promised, it is assured that the entire local railroad system will be operated by power from the Kings County Company.

If this is accomplished it is the present intention of the trolley roads to sell their present power houses to the new electrical company. This will give the new company a plant of sufficient capacity to supply all Brooklyn with electricity.

The electricians say that the machinery of the new company is the finest ever manufactured and that the plant has cost less than half what would have been paid for it ten years ago, as all iron work and machinery of every kind is at its lowest just at this time. The electricity will be produced by the newly invented machinery at half the expenditure with the old method. It will only cost half as much to lay the mains as it did a few years ago and added to this is the enormous advantage that Tesla's inventions give the concern, as it is now known that the electrical genius has devised a means of transmitting a current without loss to any distance, and the company can as well supply power to the outer fringes of Greater New York as easily as to a business house half a block away. This means that the greatest problem in electric power has been solved.

The power house, which will take up all the grounds on the river front to John street and from Gold to Bridge, a piece of property, 185x475 feet, will be equipped, it is said, with the finest machinery ever manufactured and a condenser will be included so that water may be obtained directly from the river. Coal can easily be brought in barge loads and deposited on the docks of the company. As soon as the project was started the demand for power was immediate and, as has been stated, even with the new inventions of multiplying, producing and carrying capacity, it will not be possible to meet these demands until new power houses have been erected. New plants will be established in South Brooklyn and along the water front as rapidly as possible.

Just who will be the officers of the new company is not at present known. While Messrs, Keeney, Campbell and Berri are the heaviest holders in Brooklyn there are many other men of the city interested in the new company and all, of course, will have a say in the naming of the men who will take active control of its affairs. Vice President Hobart, ex-Governor Flower and other men who were mentioned in the article of yesterday will, of course, have an active 'intercat in the Brooklyn as well as other ends of the work. Men of financial and business importance from other states are heavily interested and the company is already established on a firm financial basis and has behind it men who will not hesitate to advance its advantages by the expenditure of almost any amount of money called for by the active managers.

The advantage of have a power house established in a central position has already been recognized by the dispensers of electrical force and that is why the Edison and other big establishments have their plants as nearly as possible to the center of business localities where the demand lies. In transmitting power to railroads the idea has been advanced and is being put into practice of having central dispensing stations along the line. But even then a considerable loss has been suffered in sending the power to the stations and all along the line. Tesla's new system will do away with this loss. With this fact known the active interest of ex-Govenor Flower and D. O. Mills, as well as other big railroad men of the vicinity is doubly important, as it will probably be a question of time, and no considerable time, when all the railroads of the metropolitan district will be getting their power directly from the plants of the new company.

This morning it was learned by an Eagle reporter that the first business of the company would not be competitive but would be in an entirely new field in Brooklyn and New York. It is certain, however, that electric lighting and power dispensing will not be monopolized in this vicinity within a few months from now. The first idea of the new company was to supply the new demand created every day by new industries and it was with that intention that Charles Cooper obtained his franchise. The control of the Tesla patents, however, and the advantages obtained through the genius of the inventor soon developed new possibilities that wholly outgrew the original intentions of Mr. Cooper and the capitalists behind him. The Cooper company has been continued for convenience until the directors of the concern deem it advisable to elect its regular officers and begin business upon the large scale that is now possible.

“There is no mystery about it,” one of the interested men said this morning. “It is a pure business venture with certain details that the directors do not deem it necessary to immediately disclose. While the publication of the plans of the company could not possibly injure it in any way, it would be of no benefit to us. We do not care to boom the company. That fact is apparent when it is said that not a bit of stock could be obtained by any one and we would not reveal the advantages we posses for that purpose. The Eagle's article created something like a sensation and that was just what we did not want to happen. All the money we want is now invested, and we would rather go right ahead in a regular business way with our work. In ten days, perhaps, the details of the company may be obtained, but we have no desire to publish any facts at present for purely business reasons. The Eagle's article, however, was correct except that it really did not give more than an idea of the magnitude of the concern.” 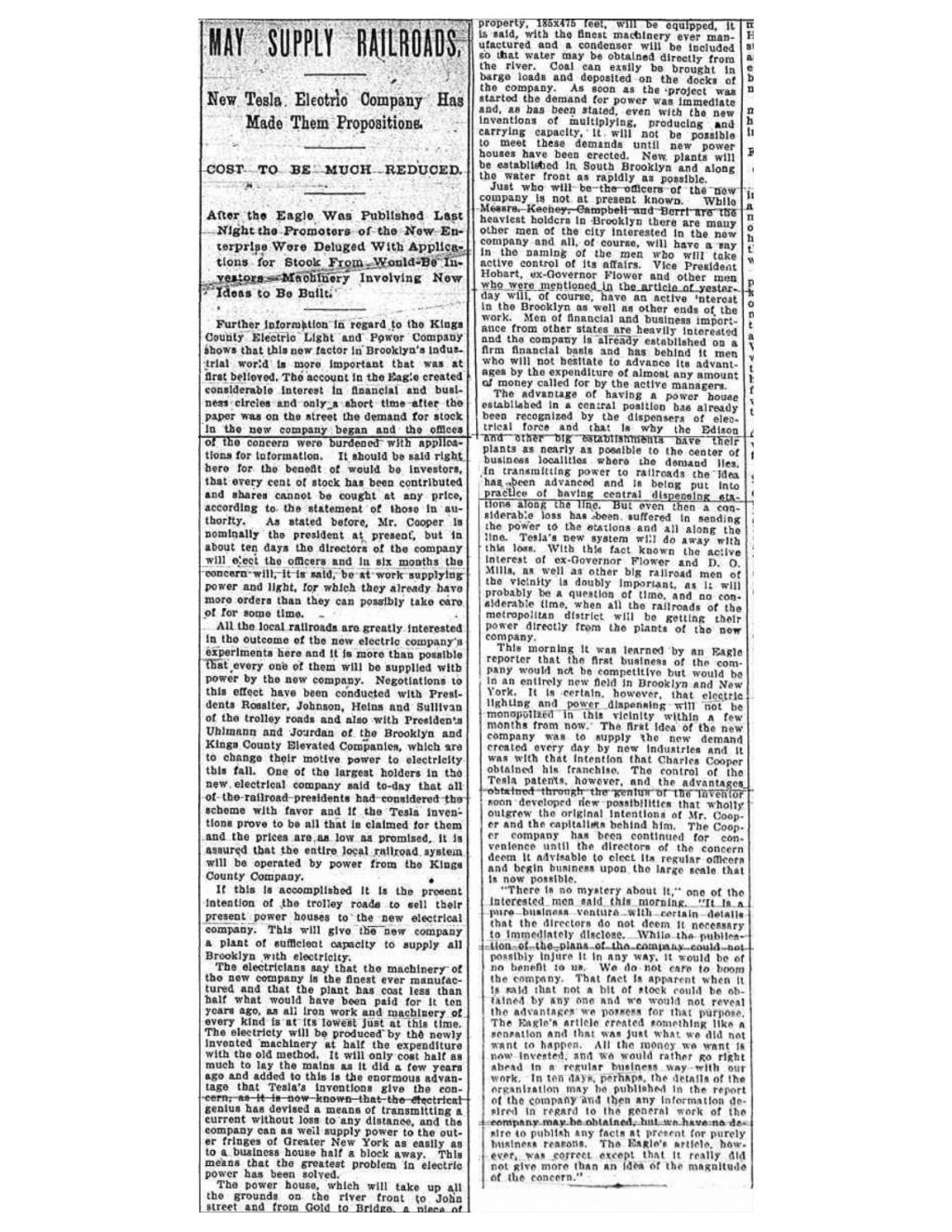