Thinks He Should Receive Credit for His Own Inventions

I have been much surprised to read in The Times of Sunday, April 21, that Admiral H. N. Manney, U.S.N. attributes a well-known invention of mine, a process for the production of continuous electrical oscillations by means of the electric arc and condenser, to Valentine Poulsen, the Danish engineer. This improvement has been embodied by me in numerous forms of apparatus identified with my name, and I have described it minutely in patents and scientific articles. To quote but one of many references, I may mention my experimental lecture on “Light and Other High-Frequency Phenomena,” published under the auspices of the Franklin Association, for which both of these societies have distinguished me.

I share with Admiral Manney in the gratification that we are in the lead, and particularly that wireless messages have been transmitted from Pensacola to Point Lorne. Inasmuch, however, as this feat could not have been accomplished except by the use of some of my own devices, it would have been a graceful act on his part to bring this feat to the attention of the wireless conference. My theory has always been that military men are superior to civilians in courtesy. I have not been discouraged by the refusal of our Government to adopt my wireless system six years ago, when I offered it, not by the unpleasant prospect of my passing through the experiences described by Mark Twain in his story of the beef contract, but I see no reason why I should be deprived of a well-earned honor and satisfaction.

The Times has hurt me grievously; not by accusing me of commercialism, nor by its unkind editorial comments on those letters I wrote, in condemnation of my system of power transmission in the Subway. It is another injury, perhaps, unintentional, which I have felt most keenly.

The editor of The Times may not have known that I am a student of applied mathematics when he permitted a fellow student of mine to insinuate in The Times of March 28 that I avail myself of inventions of others. I cannot permit such ideas to gain ground in this community, and, just to illuminate the situation, I shall quote from the leading electrical paper, The London Electrician, referring to some wireless plants of Braun and Marconi: “The spark occurs between balls in the primary circuit of a Tesla coil. The air wire *** is in series with a Tesla transformer. *** The generating plant is virtually a Poldhu in miniature. Evidently Braun, like Marconi, has been converted to the high-potential methods introduced by Tesla.” Needless to add that this substitution of the old, ineffective Hertzian appliances for my own has not been authorized by me.

My fellow-student can rest assured that I am scrupulously respecting the rights of others. If I were not prompted to do so by a sense of fairness and pride I would be by the power I have of inventing anything I please. 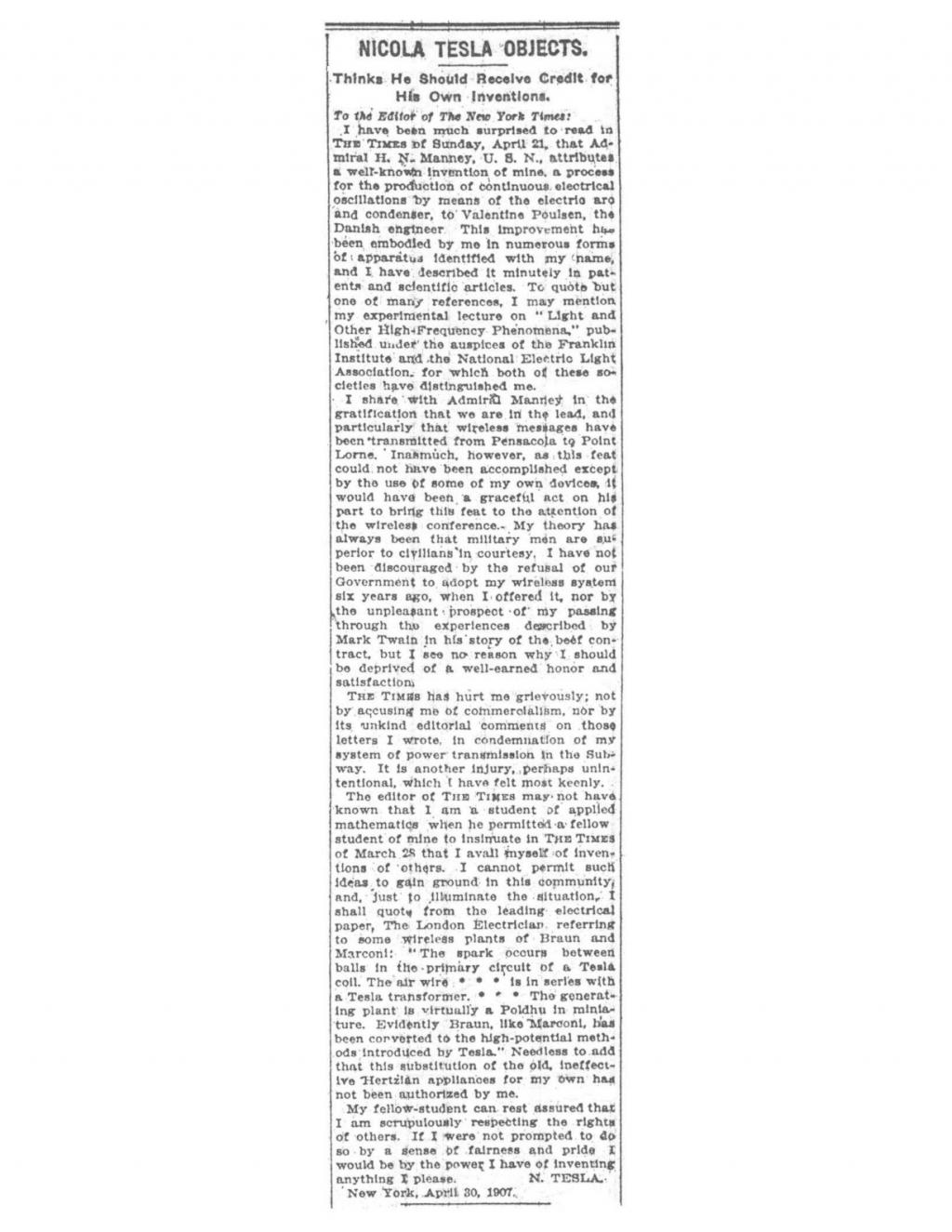