Tesla Says Edison Was an Empiricist

A Little Theory Would Have Saved Him 90% of Labor, Ex-Aide Asserts — Praises His Great Genius.

Nikola Tesla, one of the world's outstanding electrical technicians, who came to America in 1884 to work with Thomas A. Edison, specifically in the designing of motors and generators, recounted yesterday some of his impressions of the years in which he had worked with the inventor.

“Edison was by far the most successful and, probably, the last exponent of the purely empirical method of investigation,” he said. “Everything he achieved was the result of persistent trials and experiments often performed at random but always attesting extraordinary vigor and resource. Starting from a few known elements, he would make their combinations and permutations, tabulate them and run through the whole list, completing test after test with incredible rapidity until he obtained a clue. His mind was dominated by but one idea, to leave no stone unturned, to exhaust every possibility.

“If he had a needle to find in a haystack he would not stop to reason where it was most likely to be, but would proceed at once, with the feverish diligence of a bee, to examine straw after straw until he found the object of his search.

“I came from Paris in the Spring of 1884, and was brought in intimate contact with him. We experimented day and night, holidays not excepted. His existence was made up of alternate periods of work and sleep in the laboratory. He has no hobby, cared for no sport or amusement of any kind and lived in utter disregard of the most elementary rules of hygiene. There can be no doubt that if he had not married later a woman of exceptional intelligence, who made it one object of her life to preserve him, he would have died many years ago from consequences of sheer neglect. So great and uncontrollable was his passion for work.

“His method was inefficient in the extreme, for an immense ground had to be covered to get anything at all unless blind chance intervened and, at first, I was almost sorry to witness of his doings, knowing that just a little theory and calculation would have saved him 90 per cent of the labor. But he had a veritable contempt for book learning and mathematical knowledge, trusting himself entirely to his inventor's instinct and practical American sense. In view of this, the truly prodigious amount of his actual accomplishments is little short of a miracle.

“The recurrence of a phenomenon like Edison is not very likely. The profound change of conditions and the ever increasing necessity of theoretical training would seem to make it impossible. He will occupy a unique and exalted position in the history of his native land, which might well be proud of his great genius and undying achievements in the interest of humanity.” 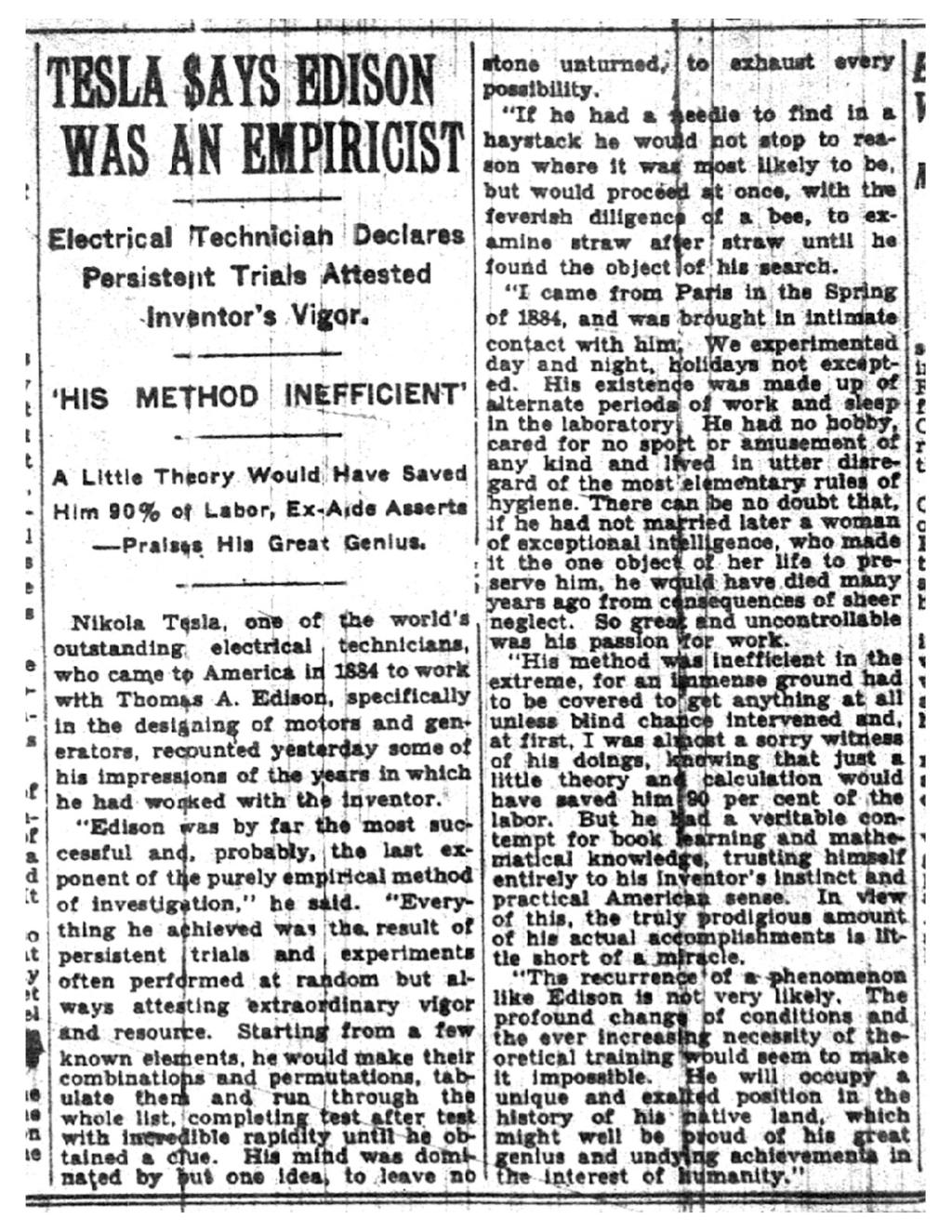