Tesla Speech for the Institute of Immigrant Welfare

Mr. Chairman,
Members of the Institute of Immigrant Welfare,
Ladies and Gentlemen:

I can not find words to express adequately my keen regret for being unable to receive, in person, the high distinction which the Institute of Immigrant Welfare has conferred upon me. Although my recovery from injuries sustained in an automobile accident six months ago is almost complete, I do not feel equal to the task of appearing in public and meeting the obligations which this would impose upon me.

My coming to this country was a great adventure - every detail of which is still vivid in my memory. Early in 1884, while employed by a French Company in Paris, I made important improvements in dynamos and motors and was engaged by the Edison interests in New York to design and construct similar machines for them. It had been the height of my ambition and my most ardent wish to come in contact with Edison and see America. Accordingly, I undertook the voyage and after losing my money and tickets and passing through a series of mishaps, including a mutiny in which I nearly lost my life, I landed on these blessed shores with four cents in my pocket. My first intention was to look up a close American friend before going to the Edison establishment. 0n my way uptown I came to a small machine shop in which the foreman was trying to repair an electric machine of European make. He had just given up the task as hopeless and I undertook to put it in order without a thought of compensation. It was not easy but I finally had it in perfect running condition. I was astonished when he gave me twenty dollars and wished that I had come to America years before. The next day I was thrilled to the marrow by meeting Edison who began my American education right then and there. I wanted to have my shoes shined, something I considered below my dignity. Edison said: "Tesla, you will shine the shoes yourself and like it. He impressed me tremendously. I shined my shoes and liked it.

I began the work for which I was engaged immediately and after nine months of strenuous effort I fulfilled my contract rigorously. The manager had promised me fifty thousand dollars but when I demanded payment, he merely laughed. "You are still a Parisian," remarked Edison, "when you become a full-fledged American you will appreciate an American joke." I felt deeply hurt as I had expected to use the money in the development of my alternating system and when some people proposed to form a company under my name, I accepted eagerly. Here was the opportunity I had vainly sought for years but my new friends were adamant in their resolve not to have anything to do with the worthless alternating currents which Edison condemned as deadly. They desired an arc light system and I had to comply with their request though the delay of my cherished plans was agonizing. In one year of day and night application, I managed to perfect the system which was adopted for lighting the city and some factories in the neighborhood. Then came the hardest blow I ever received. Through some local influences, I was forced out of the company losing not only all my interest but also my reputation as engineer and inventor. After that I lived through a year of terrible heartaches and bitter tears, my suffering being intensified by material want. Very often I was compelled to work as a laborer and my high education in various branches of science, mechanics and literature seemed to me like a mockery. Finally, I had the good fortune of meeting two capable and honest men who listened to me and came to my assistance. They organized a company, provided a laboratory and gave me a modest but sure financial support. I perfected my motors quickly having nothing else to do except to carry out plans I had formed years before. My inventions proved a success and attracted the attention of George Westinghouse. He was, in my opinion; the only man on this globe who could take my alternating system under the circumstances then existing and win the battle against prejudice and money power. He was a pioneer of imposing stature, one of the world's true noblemen of whom America may well be proud and to whom humanity owes an immense debt of gratitude.

I have to add that in all my troubles I did not neglect to declare my intention of becoming a citizen of this glorious country and in due course I secured my papers making me a proud and happy man. 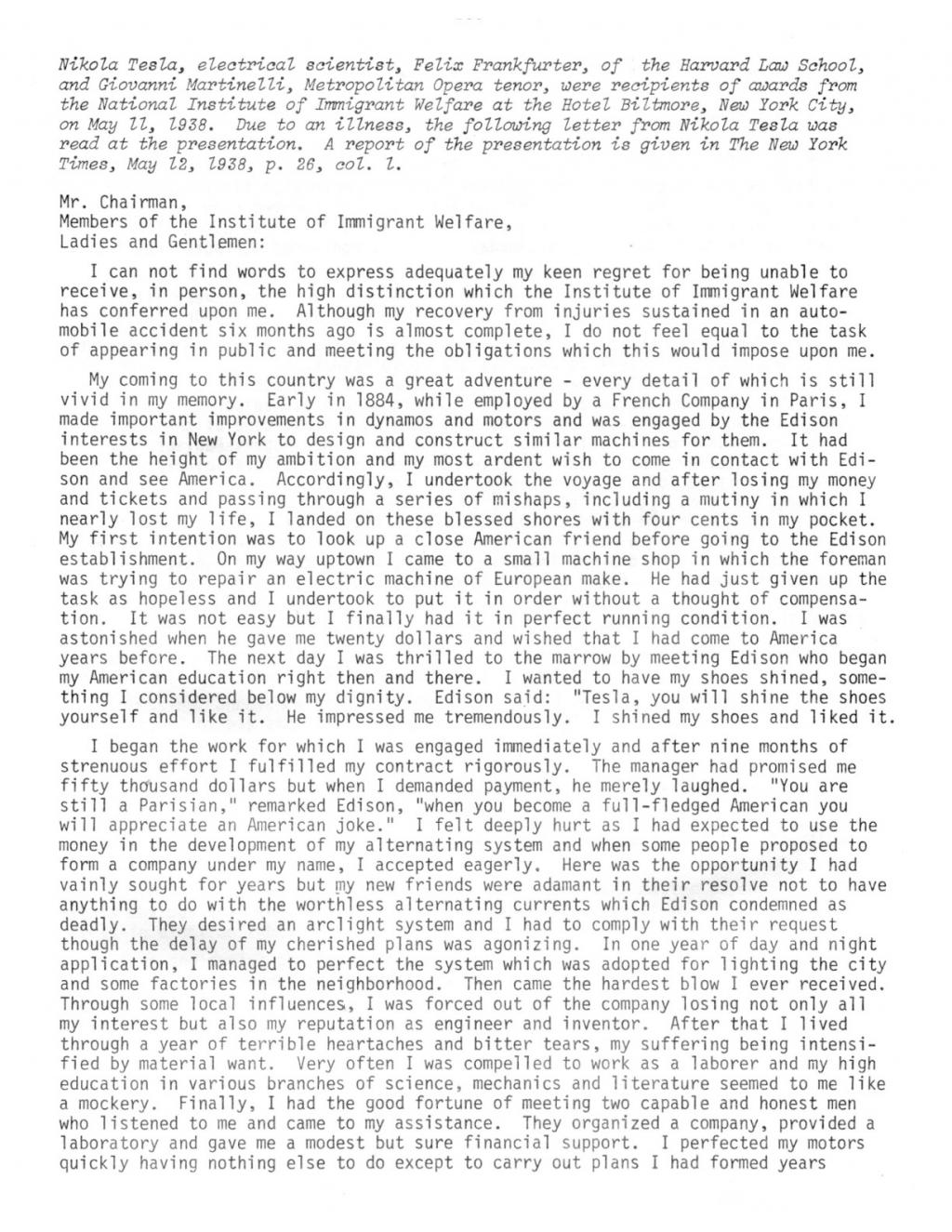