The flooding of the subway is a calamity apt to repeat itself. As your readers will remember, it did not occur for the first time last Sunday. Water, like fire, will break loose occasionally in spite of precautions. It will never be possible to guard against a casual bursting of a main; for while the conduit can be safely relied upon under normal working conditions, any accidental obstruction to the flow may cause a pressure which no pipe or joint can withstand.

In fact, if we are to place faith in the gloomy forecasts of Commissioner Oakley, who ought to know, such floods may be expected to happen frequently in the future. In view of this it seems timely to call to public attention a danger inherent to the electrical equipment which has been thrust upon the Interborough Company by incompetent advisers.

The subway is bound to be successful, and would be so if the cars were drawn by mules, for it is the ideal means of transportation in crowded cities. But the full measure of success of which it is capable will be attained only when the financiers shall say to the electric companies: “Give us the best, regardless of expense.”

It is to be regretted that this important pioneering enterprise, in other respects ably managed and engineered, should have been treated with such gross neglect in its most vital feature. No opportunity was given to myself, the inventor and patentee of the system adopted in the subway and the elevated roads, for offering some useful suggestion, nor was a single electrician or engineer of the General Electric and Westinghouse companies consulted, the very men who should have been thought of first of all.

Once large sums of money are invested in a defective scheme it is difficult to make a change, however desirable it may be. The movement of new capital is largely determined by previous investment. Even the new roads now planned are likely to be equipped with the same claptrap devices, and so the evil will grow. “Das eben ist der Fluch der boesen Thut, das sie fortzeugend Boeses muss gebaeren.”

The danger to which I refer lies in the possibility of generating an explosive mixture by electrolytic decomposition and thermic dissociation of the water through the direct currents used in the operation of the cars. Such a process might go on for hours and days without being noticed; and with currents of this kind it is scarcely practicable to avoid it altogether.

It will be recalled that an expert found the percentage of free oxygen in the subway appreciably above that which might reasonably have been expected in such a more or less stagnated channel. I have never doubted the correctness of that analysis and have assumed that oxygen is being continuously set free by stray currents passing through the moist ground. The total amperage of the normal working current in the tunnel is very great, and in case of flooding would be sufficient to generate not far from 100 cubic feet of hydrogen per minute. Inasmuch, however, as in railway operation the fuses must be set hard, in order to avoid frequent interruption of the service by their blowing out, in such an emergency the current would be of much greater volume and hydrogen would be more abundantly liberated.

It is a peculiar property of this gas that it is capable of exploding when mixed with a comparatively large volume of air, and any engineer can convince himself by a simple calculation that, say, 100,000 cubic feet of explosive might be formed before the danger is discovered, reported and preventive measures taken. What the effect of such an explosion might be on life and property is not pleasant to contemplate. True, such a disaster is not probable, but the present electrical equipment makes it possible, and this possibility should be, by all means, removed.

The oppressiveness of the tunnel atmosphere is in a large measure due to the heat supplied by the currents, and to the production of nitrous acid in the arcs, which is enhanced by rarefaction of the air through rapid motion. Some provision for ventilation is imperative. But ventilation will not do away with the danger I have pointed out. It can be completely avoided only by discarding the direct current.

I should say that the city authorities, for this if for no other reason, should forbid its use by a proper act of legislation. Meanwhile, the owners of adjacent property should object to its employment, and the insurance companies should refuse the grant of policies on such property except on terms which it may please them to make. 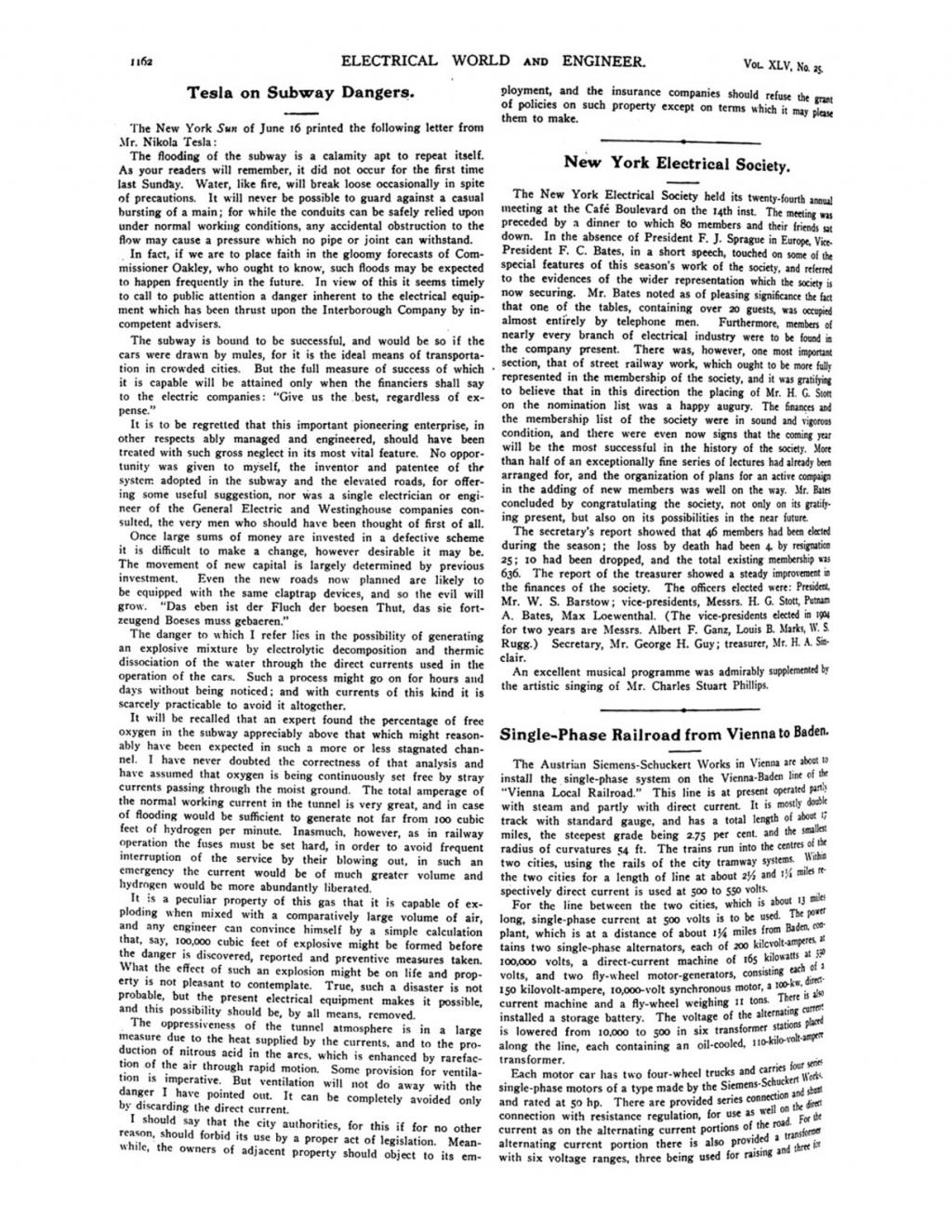