Inventor Once Blew Out Power in Springs with Experiment

For someone whose discoveries gave rise to everything from the coil in your car’s motor to the energy that sparks your television, it was a meager turnout.

But 10 faithful Nikola Tesla enthusiasts in Colorado Springs marked the inventor’s 150th birthday Saturday with appropriate awe at the International Brotherhood of Electrical Workers Local 113, a fitting place, given that Tesla was a charter IBEW member.

In his home country of Croatia, presidents of Croatia and Serbia on Monday will dedicate Tesla’s birthplace, recently renovated and converted into a museum. On Friday, a new statue of Tesla was unveiled in Croatia’s capital. Parliament has declared 2006 to be Tesla’s year, and a recent poll chose him as Croatia’s “greatest son.”

He conducted experiments in Colorado Springs from May 1899 until 1900. One included lighting 200 bulbs in Palmer Lake without wires by throwing a switch in Memorial Park - the outcome of his “terrestrial stationary waves” discovery, which he considered his most important.

Tesla also once blew out all the power in Colorado Springs with an experiment gone awry.

“He was 100 years ahead of his time,” said Andy “Skip” Juhasz, an electrical engineer and former officer of the Tesla Society that operated a museum here until it closed in 1997.

He registered more than 700 patents and foresaw interplanetary communications and satellites. Today, he is widely credited with developing radio technology.

During his lifetime, Tesla was hailed as a scientific genius, featured in countless news accounts and honored with awards and honorary degrees.

He died on Jan. 7, 1943, in the Hotel New Yorker, where he had lived the last 10 years of his life. There, the FBI converged to rifle through his personal safe and other containers to find what was believed to be plans for a particle beam weapon, said J.W. McGinnis of Colorado Springs, a Tesla expert at Saturday’s gathering.

McGinnis said Tesla was a generous sort with a sense of humor. Asked how he knew one of his inventions would work, Tesla replied, “The aliens told me.”

Vernon Roth of the Westcliffe area showed up at the IBEW with a two-liter, electrically charged bottle of water he said is based on Tesla’s technology. The water, when consumed, boosts the body’s immune system and might cure everything from multiple sclerosis to cancer, he said. “This is very beneficial for the body,” he said.

What to call such a potion? “Spark of Life,” of course. 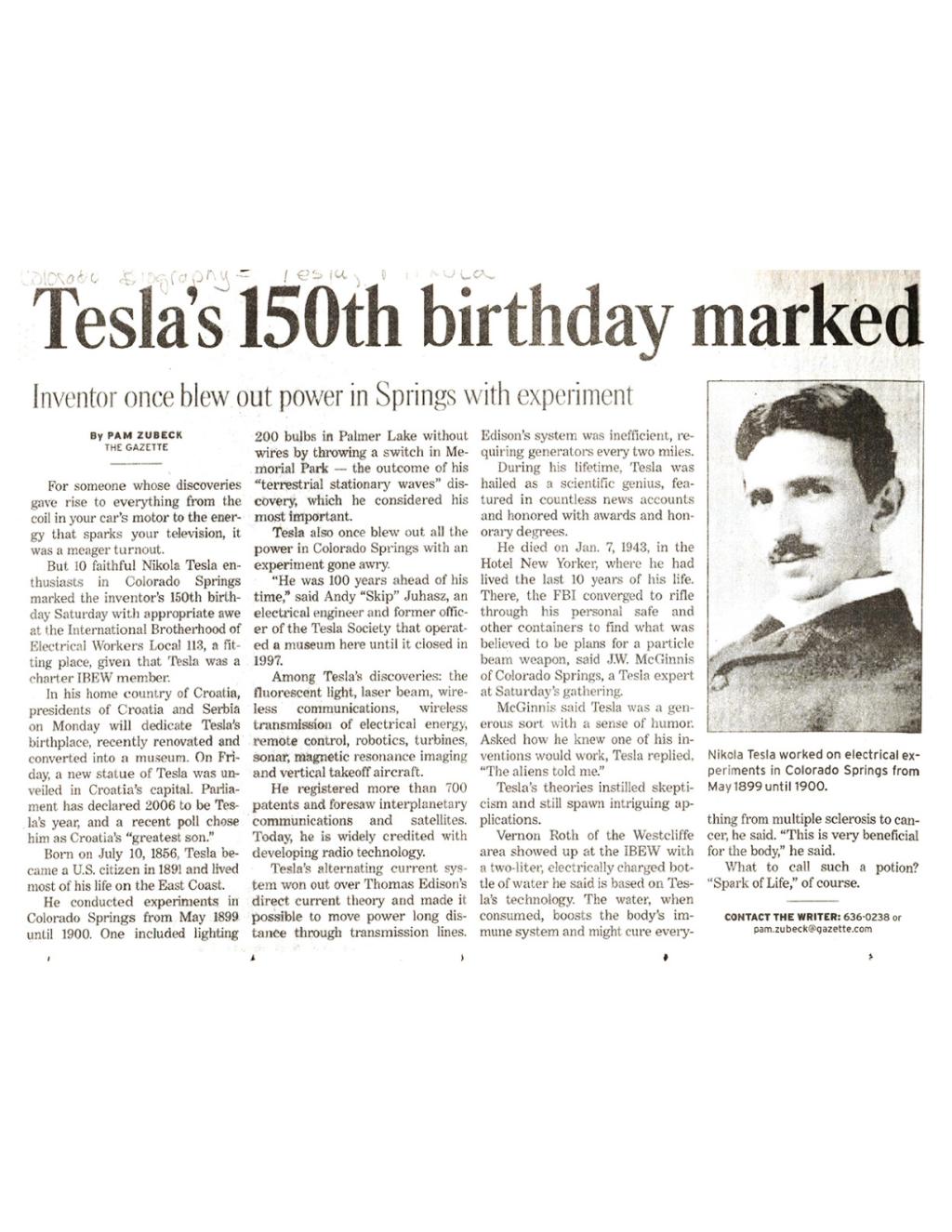