Since, in 1887, Mr. Tesla conceived and applied the rotating magnetic field to alternating-current power transmission, this remarkable man has received a large share of public attention. He possesses what has been termed a “scientific imagination,” and his bold views of natural phenomena have been given wide publicity. The subjoined interview was obtained exclusively for the Western Electrician by Mr. Frank L. Perry and was telegraphed to Chicago at the last moment for insertion in the Twentieth Century issue.

Nikola Tesla was seen at the Waldorf-Astoria in New York late on Friday evening, January 4th. He consented to answer one pertinent question relating to his researches, and his reply indicates a perfect confidence that astonishing, but, nevertheless, practical, results will be achieved during the earlier part of the twentieth century, through the skillful utilization of electric “tuning” or resonance effects, with circuits carrying oscillating currents of high frequency.

The question put to Mr. Tesla was this: “From your own investigations with high-frequency currents and the transmission of electrical energy through their aid, as revealed by you to date, it would seem that there was a great future along this line. Therefore, will you not tell me. Does not the question of syntony, or as the layman would put it, ‘electrical tuning,’ of circuits become a most important one, and one that indicates the direction investigations must take during, say, the next 10 or 15 years? Will not the greatest progress be made with what could very properly be called ‘resonance effects?’”

“You have put a question,” answered Mr. Tesla, “which not only is of great importance in many arts of the present day, but also throughout the mechanism of the universe. The phenomena of sound and light afford striking examples. I believe that ultimately even nerve action will he proved to involve the principles of ‘sympathetic response.’ Spencer's idea of the unstable nerve matter is ingenious in its conception, but difficult to be admitted as a reality. The cones of the retina, with their fibers, must likewise behave as elastic systems, responding sympathetically. If this be so, the undulatory theory can hardly be true, because the periods of oscillation of these vibratory systems would be far too great for those of the light waves. Nor can we stop at the simple nerve action, for, in the entire complex movement of humanity, the same universal principle forces itself upon our observation as unmistakably as in the vibrations of a tuning fork.

“My own experiments in electrical and mechanical vibration have impressed me deeply with the tremendous possibilities in this direction. With a small engine capable of pressing a piston back and forth with a force of but two pounds, I have set an entire block of modern buildings, by careful attunement, into such a violent swaying that people rushed out affrighted. With an impressed force of only a fraction of a pound, I have caused steel rings of several square inches cross-section, capable of supporting several hundred tons, to vibrate and form loops like thin piano wires, until they finally broke.

“In electrical vibration I have frequently obtained results even more wonderful. The tuning of electric circuits is becoming more and more important with the advancement of the arts and refinement of methods, The layman can have but a vague idea of what can be accomplished in this line by men possessed of knowledge and skill. As to the former, it is acquired easily enough. The principles are very simple and do not require an exceptionally high scientific training. Perhaps the clearest expositions have been given by Dr. Oliver Lodge and Prof. Pupin. The latter, particularly, was fortunate in dealing with the subject, and a beginner can find no better source of information.

“But the skill is not acquired as quickly or as easily as the knowledge of the simple principles. It comes slowly, requires great patience and untiring application. Owing to this fact, of necessity but few are proficient in this art to-day. This is the reason why the greater part of contemporaneous literature on this subject is pervaded with the grossest errors. Many experimenters do not seem to realize that an electrical system cannot vibrate through an imperfect contact or path of high resistance. Still many more overlook the necessity of placing the excited system in a condition permitting free oscillation, yet everybody knows that if he grips a spring firmly and pushes it back and forth it cannot perform its own vibrations. Similarly, an excited electrical system, as the secondary of a transformer, cannot oscillate freely if the exciting primary circuit is linked closely with it.

“While the establishment of the best relations between the physical constants of electric circuits is imposed by economy, yet the chief object will be the attainment of specific results, as, for instance, a very high electromotive force, a current of great intensity or the magnification of feeble impulses. The transmission of electrical energy through the earth, for whatever purpose it may be, offers, in my opinion, the greatest possibilities of development.

“The time is not far off when electrical oscillations will speed in all directions through the globe, innumerable, yet each separate and distinct and each fulfilling its mission. The seemingly simple subject expands as one advances in its study, until he feels as if the wide ocean were opening up before his eyes. Some five years ago, to test the capacities of a system of telegraphy, I ‘tuned’ repeatedly 150 circuits, calling up each one in turn, without disturbing the others. And I thought then I had mastered the art. As I look back on those experiences now I realize that I was then only just beginning to learn.” 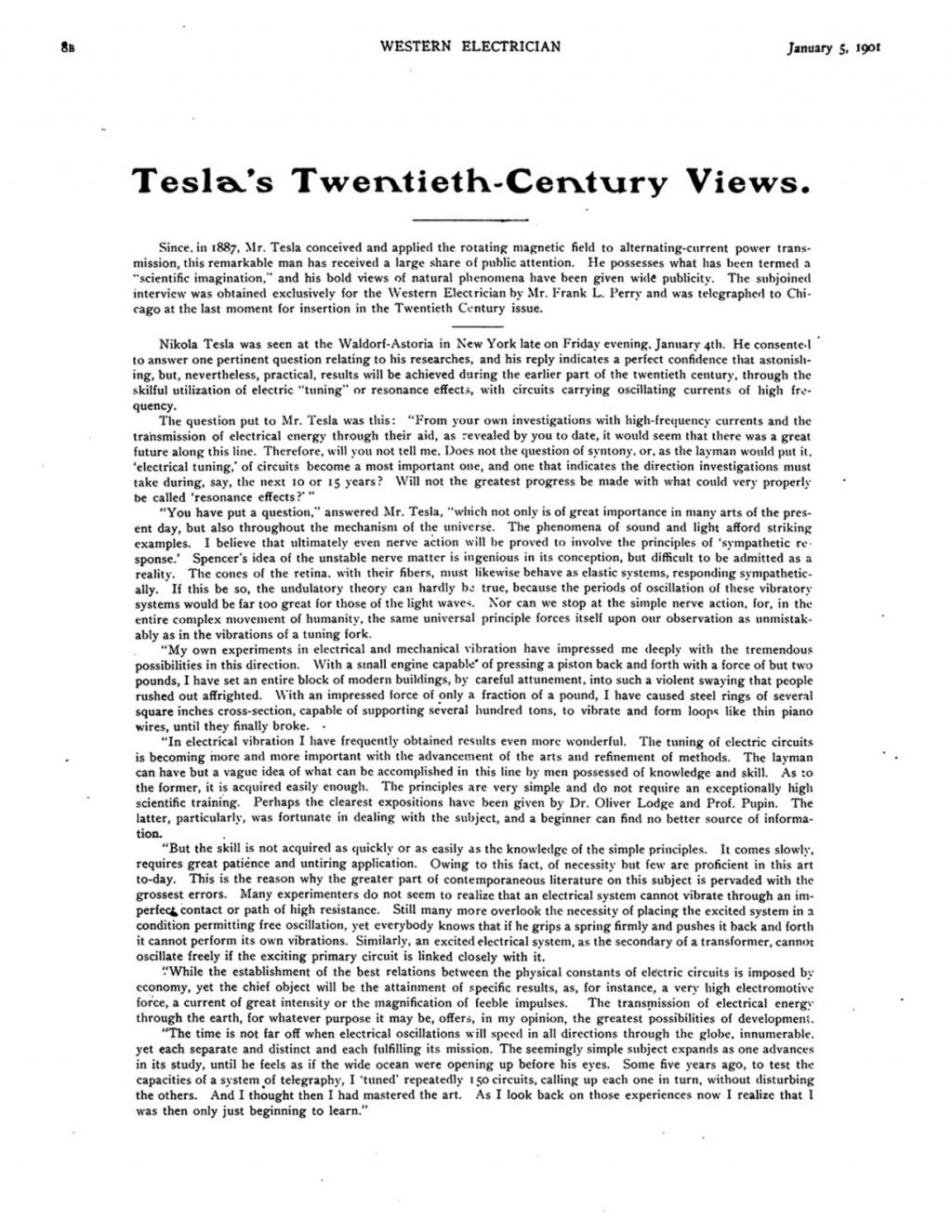