Nikola Tesla Takes Issue With Other Statisticians and Puts Total Cost at the Enormous Figure Named Above.

New York. - Taking issue with other statisticians more moderate in their estimates, Nikola Tesla, the famous inventor of electrical contrivances, said that the total cost of the general war now going on probably will not be less than seventy billion dollars.

“The present war may easily involve 20,000,000 combatants,” said Mr. Tesla. “I have seen an estimate of a total cost of $50,000,000 a day. This is too low. The number of those disabled through wounds and disease was recently placed at 500,000. This, also, is too moderate. It would be less than two and one-half per cent, and it must be remembered that in the most recent great war preceding this, the Balkan struggle, the casualties were ten times greater, or 25 per cent.

“Observe that it is reported Belgium lost $300,000,000 in two weeks fighting while there were no large cities in the path of the Germans.

“The difficulty with most statisticians of war losses is that they simply consider the cost of military operations. This is a small fraction of the whole waste.

“To measure the losses due to war merely by statistical standards is absurd. An example will make this clear. The strain imposed upon a country in a state of siege is compelling of strict economy. The savings thus affected go to offset the drain of war. Theoretically, it is possible for a nation, by living on bread and water and curtailing all expenses, to accumulate enough for not only meeting the cost of military operations but leaving surplus besides. From the point of view of the statistician such a war, far from being costly, would be the very means of creating wealth.

“It is equally unreasonable to define the waste of international conflict as the excess of waste in time of war over that in time of peace. A quantity “b” may be deducted from a quantity “a” and the difference will be “a-b” on the supposition, however, that the quantities are composed of identical units.

“Now, while the same human beings are concerned both in peace and war, these two states bear no resemblance to each other. In one, reason and sober sense, a feeling of safety and desire to do justice prevail; in the other these beneficial influences are weakened, and folly, fear and greed assert themselves. War changes individuals as well as values.

“A true appreciation of the enormous losses which are likely to result from this unprecedented calamity can only be gained by taking into account its effect on all phases and conditions of individual and national existence. Stated in the order of their magnitude these losses may be enumerated as follows:

“First, temporary or permanent shrinkage of wealth of nations as distinct from negotiable securities. The total wealth of the countries involved is about three hundred billions of dollars. Assume only a moderate production of ten per cent and suppose further that the war should last from six to seven months or about two hundred days, as forecast by experts, then the daily shrinkage will amount to $150,000,000. To be sure such depreciation of physical possessions is mostly due to ignorance and faintheartedness of the people, for the properties are there and some are indestructible. But just the same the warring nations will lose credit and purchasing power and will be subjected for an indefinite period to sufferings and privations, all of which must be interpreted as loss of so much money.

“Second - All losses, individual and collective, caused by interference of war with the wheelwork of manufacture, industry and commerce. These reflect particularly on the market value of negotiable securities, which constitute from twenty to thirty per cent of the whole national wealth. For obvious reasons they are apt to be very large, and the shrinkage may easily amount for the above period to $100,000,000 a day.

“Third - Specific losses due to destruction of existing private and public property, including implements and materials of war. These will greatly depend on the circumstances, but may be placed at from fifty to seventy-five million dollars a day.

“Fourth - loss of life and disabling through wounds and disease. Judging from the data of the Balkan war, the casualties cannot be taken at less than fifteen per cent, making the total of 3,000.000. Assuming an average of $2,500 per individual, this waste will be nearly fourteen million dollars a day.

“Fifth - Daily cost of military operations, which may amount from twenty-five to thirty million dollars.”

According to this rough estimate the total waste cannot be much less than seventy billion dollars, making almost twenty-five per cent of the total wealth of the countries in the world. In the best circumstances it will take from forty to fifty years to repair the financial damage, not to speak of the injury to the racer and retardation of social progress in all directions. 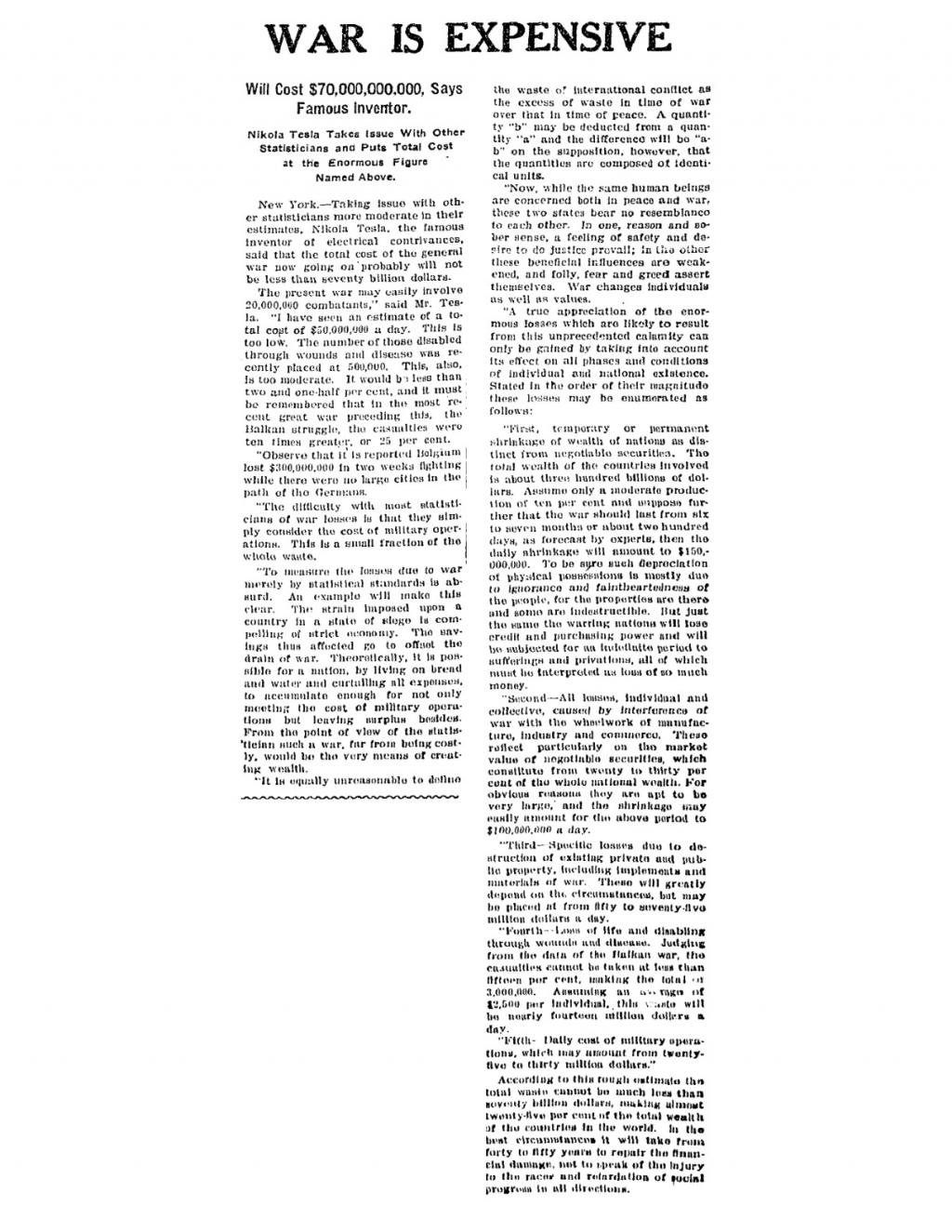