What Science May Achieve This Year

The spread of civilization may be likened to that of fire: First, a feeble spark, next a flickering flame, then a mighty blaze, ever increasing in speed and power. We are now in this last phase of development.

Human activity has become so widespread and intense that years count as centuries of progress. There is no more groping in the dark or accidentally stumbling upon discoveries. The results follow one another like the links of a chain. Such is the force of the accumulated knowledge and the insight into natural laws and phenomena that future events are clearly projected before our vision. To foretell what is coming would be no more than to draw logical conclusions, were it not for the difficulty in accurately fixing the time of accomplishment.

The practical success of an idea, irrespective of its inherent merit, is dependent on the attitude of the contemporaries. If timely it is quickly adopted; if not, it is apt to fare like a sprout lured out of the ground by warm sunshine, only to be injured and retarded in its growth by the succeeding frost. Another determining factor is the amount of change involved in its introduction. To meet with instant success an invention or discovery must come not only as a rational, but a welcome solution. The year 1910 will mark the advent of such an idea. It is a new mechanical principle.

Since the time of Archimedes certain elementary devices were known, which were finally reduced to two, the lever and the inclined plane. Another element is to be added to these, which will give rise to new conceptions and profoundly affect both the practical and theoretical science of mechanics.

This novel principle is capable of embodiment in all kinds of machinery. It will revolutionize the propulsion apparatus on vessels, the locomotive, passenger car and the automobile. It will give us a practical flying machine entirely different from those made heretofore in operation and control, swift, small and compact and so safe that a girl will be able to fly in it to school without the governess. But the greatest value of this improvement will be in its application in a field virtually unexplored and so vast that it will take decades before the ground is broken. It is the field of waste.

We build but to tear down. Most of our work and resource is squandered. Our onward march is marked by devastation. Everywhere there is an appalling loss of time, effort and life. A cheerless view, but true. A single example out of many will suffice for illustration.

The energy necessary to our comfort and safe existence is largely derived from coal. In this country alone nearly one million tons of the life-sustaining material are daily extracted from the bowels of the earth with pain and sacrifice. This is about seven hundred tons per minute, representing a theoretical activity of, say, four hundred and fifty-million horsepower. But only a small percentage of this is usefully applied.

In heating, most of the precious energy escapes through the flue. The chimneys of New York City puff out into the air several million horsepower. In the use of coal for power purposes, we hardly capture more than 10 percent. The exhaust of engines carries off more energy than obtained from live steam.

In many modern plants the power has been actually doubled by obviating this waste, but the machinery employed is cumbersome and expensive. The manufacture of light is in a barbarous state of imperfection, and this may also be said of many industrial processes. Consider just one case, the manufacture of iron and steel.

America produces approximately 30,000,000 tons of pig iron per year. Each ton of iron requires about one and a half tons of coal, hence, in providing the iron market, 70,000,000 tons of coal per annum, or 133 tons per minute, are consumed. In the manufacture of coke a ton of coal yields, roughly, 10,000 cubic feet of gas of a mean heating capacity of 600 heat units per cubic foot.

Bearing in mind that 133 tons are used per minute, the total heat units developed in that time would be 798,000,000, the mechanical equivalent of which is about 19,000,000 horsepower. By the use of the new principle 7,000,000 horsepower might be rendered available. A furnace of 200 tons produces approximately 17,000 cubic feet of gas per minute of heat value of 100 units, corresponding to a theoretical performance of 40,000 horsepower, of which not less than 13,000 might be utilized in the improved apparatus referred to. The power derived by this method from all blast furnaces in the United States would be considerably above 5,000,000 horsepower.

The preceding figures, which are conservative, show that it would be possible to obtain 12,000,000 horsepower merely from the waste gasses in the iron and steel manufacture. The value of this power, fairly estimated, is $180,000,000 per annum, and it must be made worth much more by systematic exploitation.

A part of the power could be advantageously employed for operating the blowers, rollers and other indispensable machinery and supplying electricity for smelting, steel making and other purposes. The bulk might be used in the manufacture of nitrates, aluminum, carbides and ice. The production of nitrates would be particularly valuable from the point of view of national economy. Assuming that 5,000,000 horsepower were apportioned for that purpose, the annual yield would be not less than 10,000,000 tons of concentrated nitric compound, adequate to fertilizing 40,000,000 acres of land. A great encouragement would be given to agriculture and the condition of the steel and iron workers ameliorated by offering to them a fertilizer at a reduced rate, thus enabling them to cultivate their farms with exceptional profit. Other conveniences and necessities, as light, power, ice and ozonized water could be similarly offered and numerous other improvements, both to the advantage of capital and labor, carried out.

To appreciate the above it should be borne in mind that the iron and steel industry is one of the best regulated in the world. In many other fields the waste is even greater. For example, in the operation of steam railroads, not less than 98 per cent of the total energy of coal burned is lost. An enormous saving could be effected by replacing the present apparatus with new gas turbines and other improved devices for transmitting and storing mechanical energy. A study of this subject will convince that for the time being, at least, there is more opportunity for invention in the utilization of waste than in the opening up of new resources. 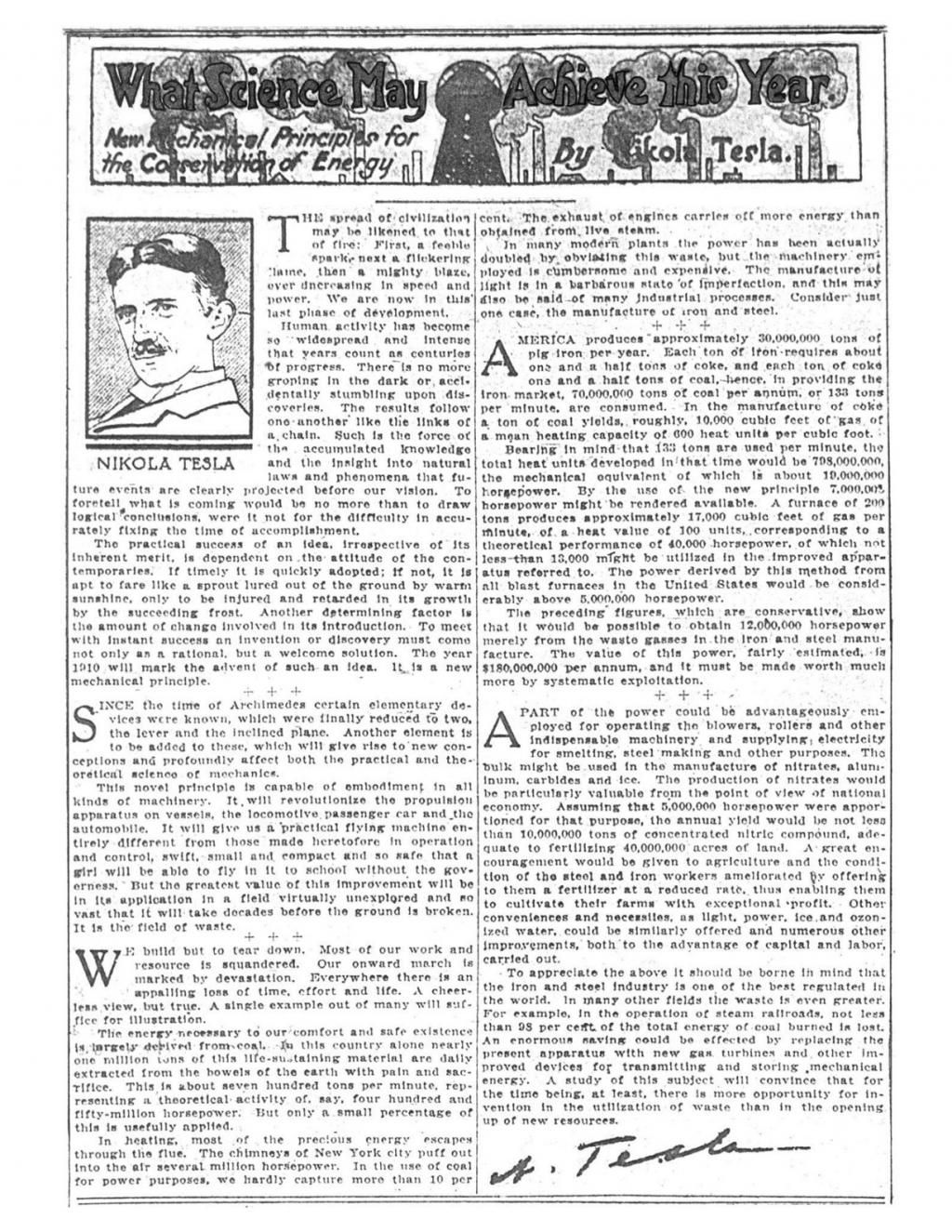