I, Henry Harris Lake, of the firm of Haseltine Lake & Co., Patent Agents, 45 Southampton Buildings, in the County of Middlesex, do hereby declare the nature of this invention and in what manner the same is to be performed to be particularly described and ascertained in and by the following statement :-

This invention relates to electric motors, the action or operation of which is dependent upon the inductive influence upon, and magnetization of a rotating armature by independent field magnets or coils traversed by alternating or similar currents, which produce their effect upon said armature not simultaneously but successively, as would result from said currents being of different phase.

The improvements consist in a novel arrangement applicable to motors, in which the current for one of the energizing circuits is obtained by induction from the other, and also in a means for increasing the flow of current in the closed induced armature coils of any form of alternating current motor in which such coils may be present, particularly, in what are now known as the Tesla motors.

The first feature above referred to is the placing in the secondary or induced field or energizing circuit of the motor a condenser, adjusting it so as to neutralize the self induction to the desired extent, and to secure between the primary and the secondary currents the proper difference of phase for the most economical operation of the motor; and the second is the interposition of a condenser in the induced or what is otherwise the closed circuit of the armature.

In the accompanying drawings

Figure 1 is a form of induction motor to which the improvements are applied.

Figure 2 is a diagram of a modification of a part of the improvements.

The motor is composed of two or more pairs or sets of field magnets, A and B, mounted in or forming part of a suitable frame and a rotary armature wound with a coil C.

In the particular motor here shown, the coils on two opposite poles, as A, are connected directly to a main or branch circuit D from a generator of alternating currents. Over, or in any other inductive relation to these coils, secondary coils E are wound, and in the circuit of these are included the energizing coils F of the other pair of field poles B. Hence, the alternating currents that energize the poles A, induce currents that energize poles B, but no means have heretofore been proposed that would secure between the phases of the primary or inducing and the secondary or induced currents that difference of phase, theoretically ninety degrees, that is best adapted for practical and economical working.

To more perfectly secure this object, I interpose in the secondary circuit, or that which includes the coils E, F, a condenser G, adjusting it as to capacity in well-known ways so as to neutralize or overcome the retarding effect of self induction and bring the phase more nearly to the proper point of difference.

As the required capacity of this condenser is dependent upon the rate of alternation or the potential or both, its size and cost may be brought within economical limits, for use with the ordinary circuits by raising the potential of the secondary circuit in the motor. Many turns of fine wire are therefore used for the coils E, so as to convert to a current of very high potential.

This improvement is equally applicable to motors of this type, that is to say,- those in which the currents for one energizing circuit are induced from the other when a distinct transformer outside of the motor is used. In the illustration, the two energizing circuits are brought into inductive relation inside the motor, but it is evident that they may be brought into the same relation outside the motor by means of a transformer.

In this, as well as in all other forms of motor in which a closed armature coil is used, in which currents are induced by the action of the field magnets or coils, the most efficient working conditions require, that, for a given inductive effect upon the armature there should be the greatest possible current through the armature or induced coils, and, also, that there should always exist between the currents in the energizing and the induced circuits, a given relation or difference of phase hence, whatever tends to decrease the self-induction and increase the current in the induced circuit will, other things being equal, increase the output and efficiency of the motor, and the same will be true of causes that operate to maintain the mutual attractive effect between the field magnets and armature at its maximum.

These results are secured by connecting with the induced or armature circuit H of the armature a condenser L. This coil or coils H have no connection with the outside circuit and are closed upon themselves through the condenser. In ordinary cases, the terminals of the coils lead to collecting rings M, M, upon which brushes N, N, bear, and the condenser is inserted between these brushes. But the armature core may be hollow and the condenser carried within it, or the sheet-iron plates, of which the core is composed, may be carefully insulated so as to constitute a condenser, and the coils may be connected to the plates. In such cases no brushes would be required.

The condenser should be of such character as to overcome the self-induction of the armature, so that when the motor is in operation the impedence of the said coils to the passage of the induced currents is not only neutralized, but the phases of the induced currents are brought more nearly into proper accord with those in the field coils.

In motors in which the armature coils are closed upon themselves, as, for example, in any form of alternating current motor in which one armature coil or set of coils is in the position of maximum induction with respect to the field coils or poles, while the other is in the position of minimum induction, the coils are preferably connected in one series and two points of the circuit thus formed are bridged by a condenser. This is illustrated in Figure 2, in which P represents one set of armature coils and P1 the other. Their points of union are joined through a condenser G.

It will be observed that in this disposition the self-induction of the two branches P and P1 varies with their position relatively to the field magnet, and that each branch is alternately the predominating source of the induced current, hence the effect of the condenser G is two-fold. Firstly, it increases the current in each of the branches alternately and secondly it alters the phase of the currents in the branches, this being the well-known effect which results from such a disposition of a condenser with a circuit as above described.

This effect is favorable to the proper working of the motor because it increases the flow of current in the armature circuits due to a given inductive effect, and also because it brings more nearly into coincidence the maximum magnetic effects of the co-acting field and armature poles.

Although this feature of the invention has been illustrated herein, in connection with a special form of motor, it will be understood that it is equally applicable to any other alternating current motor in which there is a closed armature coil wherein the currents are induced by the action of the field, and, furthermore, I would state also that the feature of utilizing the plates or sections of a magnetic core for forming the condenser, I regard as applicable, generally, to other kinds of alternating current apparatus.

Having now particularly described and ascertained the nature of the said invention and in what manner the same is to be performed, as communicated to me by my foreign correspondent, I declare that what I claim is :-

First. In an alternating current motor in which one energizing circuit is in inductive relation to the other and closed upon itself, the combination with such closed or secondary circuit of a condenser interposed in the same, as described.

Third. In an alternating current motor, the combination with the armature and an energizing circuit formed by a coil or conductor wound thereon in inductive relation to the field, of a condenser connected to the said coil or conductor.

Fourth. In an alternating current motor, the combination with armature coils in inductive relation to the field and connected in a closed circuit, of a condenser bridging said circuit, as set forth.

Fifth. In an alternating current motor, the combination with the induced energizing coil or coils of the armature of a condenser connected therewith and made a part of the armature or rotating element of the motor. 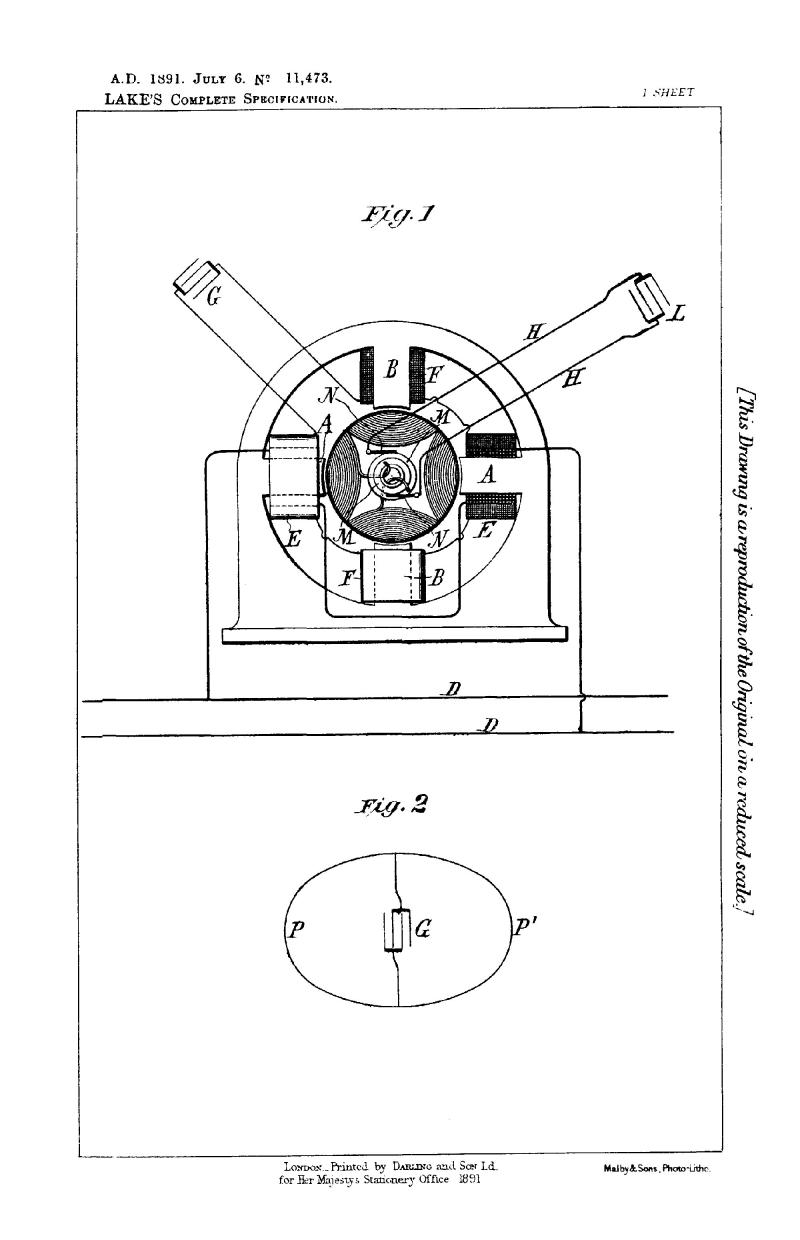