Nikola Tesla British Patent 24,421 - Improvements in Systems for the Transmission of Electrical Energy and Apparatus for Use Therein

I, Henry Harris Lake, of the Firm of Haseltine, Lake & Co., Patent Agents, 45, Southampton Buildings, in the County of Middlesex, do hereby declare the nature of this invention, and in what manner the same is to be performed, to be particularly described and ascertained in and by the following statement:-

It has been well known, heretofore, that if the air enclosed in a vessel be rarefied, its insulating properties are impaired to such extent that it becomes what may be considered as a true conductor of electricity, although one of admittedly high resistance. The practical information in this matter, however, has been derived from observations manifestly subject to limitations imposed by the character of the apparatus or means heretofore known, and the quality of the electrical effects producible thereby.

It has also been known, particularly since the investigations of Heinrich Herz, that certain transverse electrical waves or radiations may be transmitted through the atmosphere, and these have been found capable of affecting certain delicate receiving instruments at a limited distance from the source of the electrical disturbance.

The invention which forms the subject of the present application comprises a novel method or system for the transmission of electrical energy without the employment of metallic line conductors, and is primarily designed for use in cases where large amounts of electrical energy are to be transmitted to considerable distances, but the results arrived at are of such character and magnitude, as compared with any heretofore secured, as to render indispensable the employment of means and the utilization of effects essentially different in their characteristics and actions from those before used or investigated.

To be more explicit, the transmission of electrical energy, which forms a part of my present invention, demands for the attainment of practically useful results, the production and conversion of excessively high electrical pressures. Heretofore, it has been possible, by means of the apparatus at command, to produce only moderate effective electrical pressures, and even these not without some risks and difficulties, but I have devised means whereby I am enabled to generate with safety and ease electrical pressures measured by hundreds of thousands, and even millions, of volts, and in pursuing investigations with such apparatus I have discovered certain highly important and useful facts which render practicable the method of transmission of electrical energy hereinafter described.

Among these, and bearing directly upon the invention, are the following; First, that with electrical pressures of the magnitude and character which I have made it possible to produce, the ordinary atmosphere becomes, in a measure, capable of serving as a true conductor for the transmission of the current. Second, that the conductivity of the air increases so materially with the increase of electrical pressure and degree of rarefaction, that it becomes possible to transmit through even moderately rarefied strata of the atmosphere, electrical energy up to practically any amount and to any distance.

The system of transmission comprised in my present invention and which, as above stated, was rendered possible only by the production of apparatus of a character radically new and different from any before known, and which is based upon discoveries made in the investigation of the results produced thereby, consists then in producing at a given point a very high electrical pressure, conducting the current caused thereby to earth and to a terminal at an elevation at which the atmosphere serves as a conductor therefor, and collecting the current by a second elevated terminal at a distance from the first.

In order to attain this result it is necessary to employ an apparatus capable of generating electrical pressures vastly in excess of any heretofore used, and to lead the current to earth and to a terminal maintained at an elevation where the rarefied atmosphere is capable of conducting freely the particular current produced; then, at a distant point, where the energy is to be utilized, to maintain a terminal at or about the same elevation to receive the current and to convey it to earth through suitable means for transforming and utilizing it.

The apparatus which I have invented, and by means of which this method of transmission may be effected, is represented in the accompanying drawing, which is a diagrammatic illustration of the system that is to say, each transformer is shown as comprised of a spiral conductor in fine lines surrounded by a conductor in heavy lines with a very few convolutions.

The transformers, as actually constructed are, in reality, nothing more than this. For example, starting on a spool or roll of hard rubber which may contain a central core of iron wires or strands, an insulated wire is wound until a coil is built up of the desired length. This coil is built up precisely as any other, the wire being wound around the core or spool until its convolutions fill up the space and form one complete layer. The winding is continued in the same way until another layer is formed and so on.

When the desired length of secondary or high tension coil is thus obtained, the primary or low tension coil is wound outside of it, but this latter coil is composed of only a very few turns of wire or conductor, which is of much larger diameter or cross-section than the secondary wire.

The transformer thus consists simply of two concentric coils, the inner coil having very many turns of fine wire, the outer coil a very few turns of coarse wire.

From this plan of construction it follows that one of the high tension terminals is at the centre of secondary coil, and in the use of the coil the other terminal whether it be connected to ground or not is electrically connected to the primary in order that there may be no material difference of potential between the latter and the adjacent convolutions of the secondary.

Assuming that it appears from the above that in the general plan of construction of the coils, only common and well known methods have been pursued, it remains then, to consider the length of the secondary coil. This should be approximately one quarter of the wave length of the electrical disturbance in the circuit, and the reason for it is that the highest possible electrical pressures may be secured at the centre terminals of the secondary coils.

A is a coil, generally of many turns and of very large diameter, wound in spiral form either about a magnetic core or not, as may be desired. C is a second coil formed by a conductor of much larger size and smaller length wound around in proximity to the coil A.

In the transmitting apparatus the coil A constitutes the high tension secondary, and the coil C the primary of much lower tension of a transformer. In the circuit of the primary C is included a suitable source of current G.

At the receiving station a transformer of similar construction is employed, but in this case the long coil A1 constitutes the primary and the short coil C1 the secondary of the transformer. In the circuit of the latter are arranged lamps L, motors M, or other devices for utilizing the current. The elevated terminal D1 connects with the center of the coil A1, and the other terminal of said coil is connected to earth and preferably also to the coil C1 for the reasons above stated.

The length of the high tension coil of each apparatus should be approximately one-quarter of the wave length of the electrical disturbance in the circuit, this estimate being based on the velocity of propagation of the electrical disturbance through the coil itself and the circuit with which it is designed to be used. To illustrate, in accordance with accepted views, if the rate at which a current traverses the circuit, including the two high tension coils, be 185,000 miles per second, then a frequency of 925 per second would maintain 925 stationary waves in a circuit 185,000 miles long, and each wave would be 200 miles in length. For such a frequency I should use in each high tension coil a conductor 50 miles in length, or in general, with due allowance for the capacity of the leading wires and terminals, such length of conductor as would secure the highest electrical pressures at the terminals under the working conditions.

It will be observed that in coils of the character described, the potential gradually increases with the number of turns and the difference of potential between adjacent turns is comparatively small, and a very high potential, impracticable with ordinary coils, may be successfully obtained.

As the main object of the invention is to produce a current of extremely high potential, this object will be facilitated by using a primary current of very considerable frequency, but the frequency of the current is, in large measure, arbitrary, for if the potential be sufficiently high and the terminals of the coils be maintained at a proper elevation there the atmosphere is comparatively rarefied, the intermediate stratum of air will serve as a conductor for the current produced, and the latter will be transmitted through the air with, it may be, even less resistance than through an ordinary copper wire.

The apparatus described, it may be observed, is useful as a means for producing currents of very high potential for other purposes than that of the present system, as, for instance, the coils may be used singly for producing extremely high electrical potentials for any purpose, or used generally in the same manner as other electrical transformers, for the conversion and transmission of electrical energy.

It will be understood that either or both of the coils or transformers and terminals may be movable, as, for instance, when carried by vessels floating in the air, or by ships at sea. In the former case the connection of one terminal with the ground might not be permanent, but might be intermittently or inductively established without departing from the spirit of the invention.

As to the elevation of the terminals D, D1, it is obvious that this is a matter which will be determined not only by the condition of the atmosphere but also by the character of the surrounding country.

Thus, if there be high mountains in the vicinity, the terminals should be at a greater height, and, generally, they should always be at an altitude much greater than that of the highest objects near them in order to reduce the loss by leakage. Since, by the means described, practically any potential that is desired may be produced, the currents through the air strata may be very small, thus reducing the loss in the air.

It will be observed that the phenomenon here involved in the transmission of electrical energy is one of true conduction, and is not to be confounded with the phenomena of induction or of electrical radiation which have heretofore been observed and experimented with, and which, from their very nature and mode of propagation, would render practically impossible the transmission of any considerable amount of energy to such distances as would be of practical importance.

Having now particularly described and ascertained the nature of my said invention and in what manner the same is to be performed, as communicated to me by my foreign correspondent, I declare that what I claim is:- 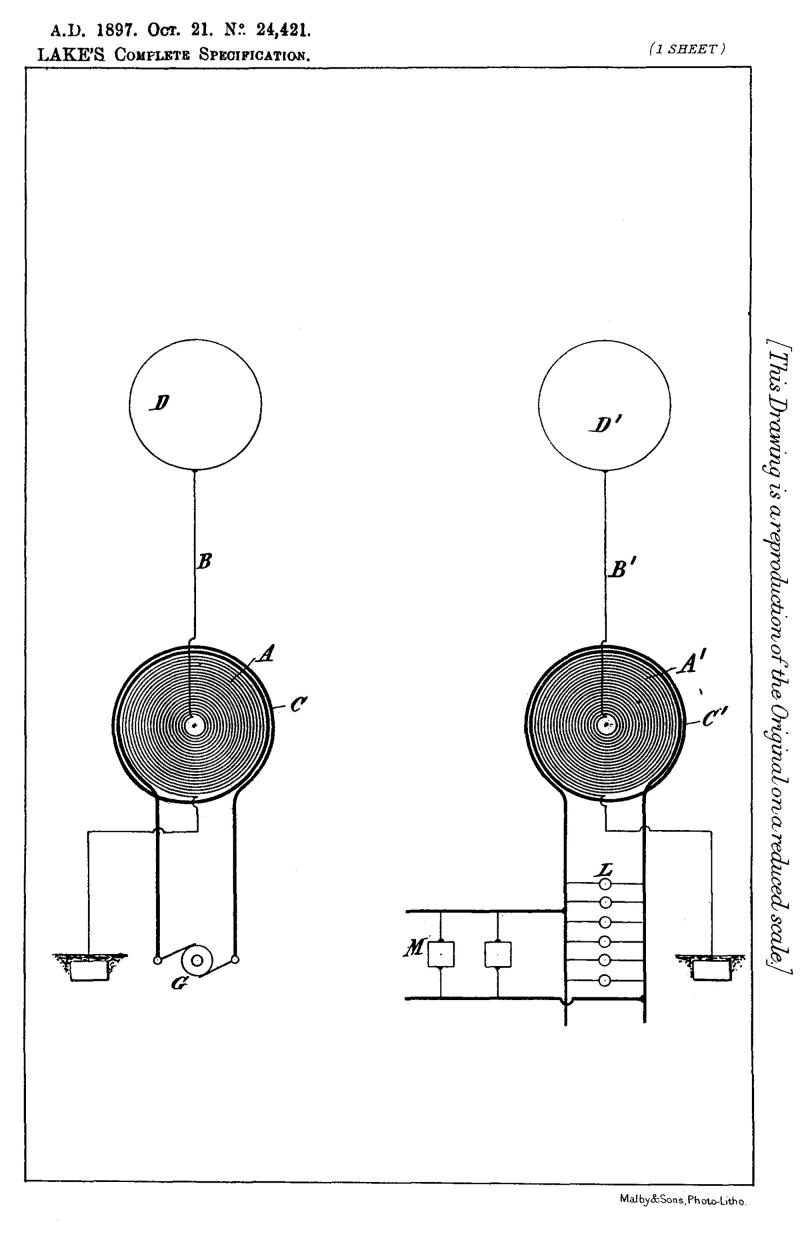