Be it known that I, NIKOLA TESLA, of Smiljan Lika, border country of Austria-Hungary, have invented an Improvement in Dynamo-Electric Machines, of which the following is a specification.

The main objects of my invention are to increase the efficiency of the machine and to facilitate and cheapen the construction of the same; and to this end my invention relates to the magnetic frame and the armature, and to other features of construction, hereinafter more fully explained.

My invention is illustrated in the accompanying drawings, in which Figure 1 is a longitudinal section, and Fig. 2 a cross-section, of the machine. Fig. 3 is a top view, and Fig. 4 a side view, of the magnetic frame. Fig. 5 is an end view of the commutator-bars, and Fig. 6 is a section of the shaft and commutator-bars. Fig. 7 is a diagram illustrating the coils of the armature and the connections to the commutator-plates.

The cores c c c c of the field-magnets may be tapering in both directions, as shown, for the purposes of concentrating the magnetism upon the middle of the pole-pieces.

The connecting-frame F F of the field-magnets is in the form indicated in the side view, Fig. 4, the lower part being provided with the spreading curved cast legs e e, so that the machine will rest firmly upon two base-bars, r r.

To the lower pole, S, of the field-magnet M is fastened, preferably by means of Babbit or other fusible diamagnetic material, the base B, which is provided with bearings b for the armature-shaft H. The base B has a projection, P, which supports the brush-holders and regulating devices, which may be such as shown in an application of like date herewith.

The armature is constructed with the view to reduce to a minimum the loss of power due to the transversal or Foucault currents and to the change of polarity, and also to shorten as much as possible the length of the inactive wire wound upon the armature-core.

It is well known that when the armature is revolved between the poles of the field-magnets currents are generated in the iron body of the armature which develop heat, and consequently cause a waste of power. Owing to the mutual action of the lines of force, the magnetic properties of iron, and the speed of the different portions of the armature-core, these currents are generated principally on and near the surface of the armature-core, diminishing in strength gradually toward the center of the core. Their quantity is under same conditions proportional to the length of the iron body in the direction in which these currents are generated. By subdividing the iron core electrically in this direction the generation of these currents can be reduced to a great extent. For instance, if the length of the armature-core is twelve inches, and by a suitable construction the same is subdivided electrically, so that there are in the generating direction six inches of iron and six inches of intervening air-spaces or insulating material, the currents will be reduced to fifty percent.

As shown in the drawings, the armature is constructed of thin iron disks D D D, of various diameters, fastened upon the armature-shaft in a suitable manner and arranged according to their sizes, so that a series of iron bodies, i i i, is formed, each of which diminishes in thickness from the center toward the periphery. At both ends of the armature the inwardly-curved disks d d, preferably of cast-iron, are fastened to the armature-shaft.

The armature-core being constructed as shown, it will be easily seen that on those portions of the armature that are the most remote from the axis, and where the currents are principally developed, the length of iron in the generating direction is only a small fraction of the total length of the armature-core, and besides this the iron body is subdivided in the generating direction, and therefore the Foucault currents are greatly reduced. Another cause of heating is the shifting of the poles of the armature-core. In consequence of the subdivision of the iron in the armature and the increased surface for radiation the risk of heating is lessened.

The iron disks D D D may be insulated or coated with some insulating-paint, a very careful insulation being unnecessary, as an electrical contact between several disks can only occur on places where the generated currents are comparatively weak. An armature-core constructed in the manner described may be revolved between the poles of the field-magnets without showing the slightest increase of temperature.

The end disks, d d, which are of sufficient thickness and, for the sake of cheapness, preferably of cast-iron, are curved inwardly, as indicated in the drawings. The extent of the curve is dependent on the amount of wire to be wound upon the armatures. In my present invention the wire is wound upon the armature in two superimposed parts, and the curve of the end disks, d d, is so calculated that the first part—that is, practically half of the wire—just fills up the hollow space to the line x x; or, if the wire is wound in any other manner, the curve is such that when the whole of the wire is wound the outside mass of wires, w, and the inside mass of wires, w', are equal at each side of the plane x x. In this case it will be seen the passive or electrically-inactive wires are of the smallest length practicable. The arrangement has further the advantage that the total lengths of the crossing wires at the two sides of the plane x x are practically equal.

To further equalize the armature-coils at both sides of the plates that are in contact with the brushes, the winding and connecting up is effected in the following manner: The whole wire is wound upon the armature-core in two superimposed parts, which are thoroughly insulated from each other. Each of these two parts is composed of three separated groups of coils. The first group of coils of the first part of wire being wound and connected to the commutator-bars in the usual manner, this group is insulated and the second group wound; but the coils of this second group instead of being connected to the next following commutator-bars, are connected to the directly opposite bars of the commutator. The second group is then insulated and the third group wound, the coils of this group being connected to those bars to which they would be connected in the usual way. The wires are then thoroughly insulated and the second part of wire wound and connected in the same manner. Suppose, for instance, that there are twenty-four coils—that is, twelve in each part—and consequently twenty-four commutator-plates. There will be in each part three groups, each containing four coils, and the coils will be connected as follows:

In constructing the armature-core and winding and connecting the coils in the manner indicated, the passive or electrically-inactive wire is reduced to a minimum, and the coils at each side of the plates that are in contact with the brushes are practically equal, and in this way the electrical efficiency of the machine is increased.

The commutator-plates t are shown as outside the bearing b of the armature-shaft. The shaft H is tubular and split at the end portion and the wires are carried through the same in any usual manner and connected to the respective commutator-plates. The commutator-plates are upon a cylinder, u, and insulated, and this cylinder is to be properly placed and secured by expanding the split end of the shaft by a tapering screw-plug, v.

I do not claim herein the cores of the field-magnets converging towards the pole-pieces; nor do I claim the method of fastening the base to the lower field-magnet, as this has been claimed in my former application on dynamo-electric machines.

1. In a dynamo-electric machine, the armature constructed of iron disks of various diameters arranged upon the shaft in such a manner that a series of iron bodies is formed, each diminishing in thickness from the center to the periphery, substantially as and for the purposes set forth.

2. In a dynamo-electric machine, the armature-core having iron disks of various diameters, in combination with inwardly-curved end disks, for the purposes and substantially as set forth.

3. In a dynamo-electric machine, an armature-core having inwardly-curved ends, in combination with the armature-coils, the crossing wires of which coils pass into the concave heads and project equally, substantially as set forth.

4. In a dynamo-electric machine, an armature having separate coils superimposed and connected to the commutator-plates in alternating groups, substantially as set forth.

5. An armature for dynamo-electric machines, having a core composed of disks of various diameters, in combination with separate superimposed coils connected to the commutator-plates in alternate groups, substantially as set forth.

6. In a dynamo-electric machine, the magnetic frame composed of the cores c c c c, the curved pole-pieces N S, and the connecting-frame with the curved and outwardly-projecting legs e e, substantially as described. 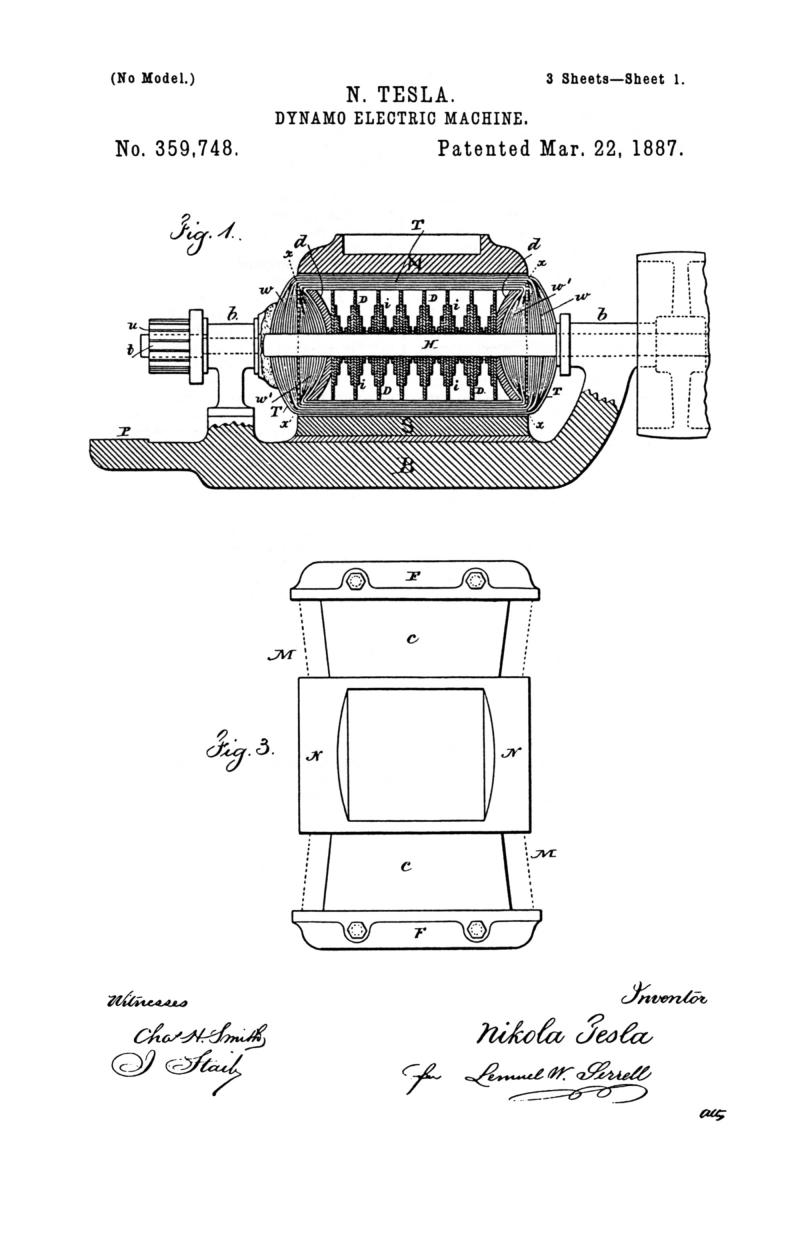 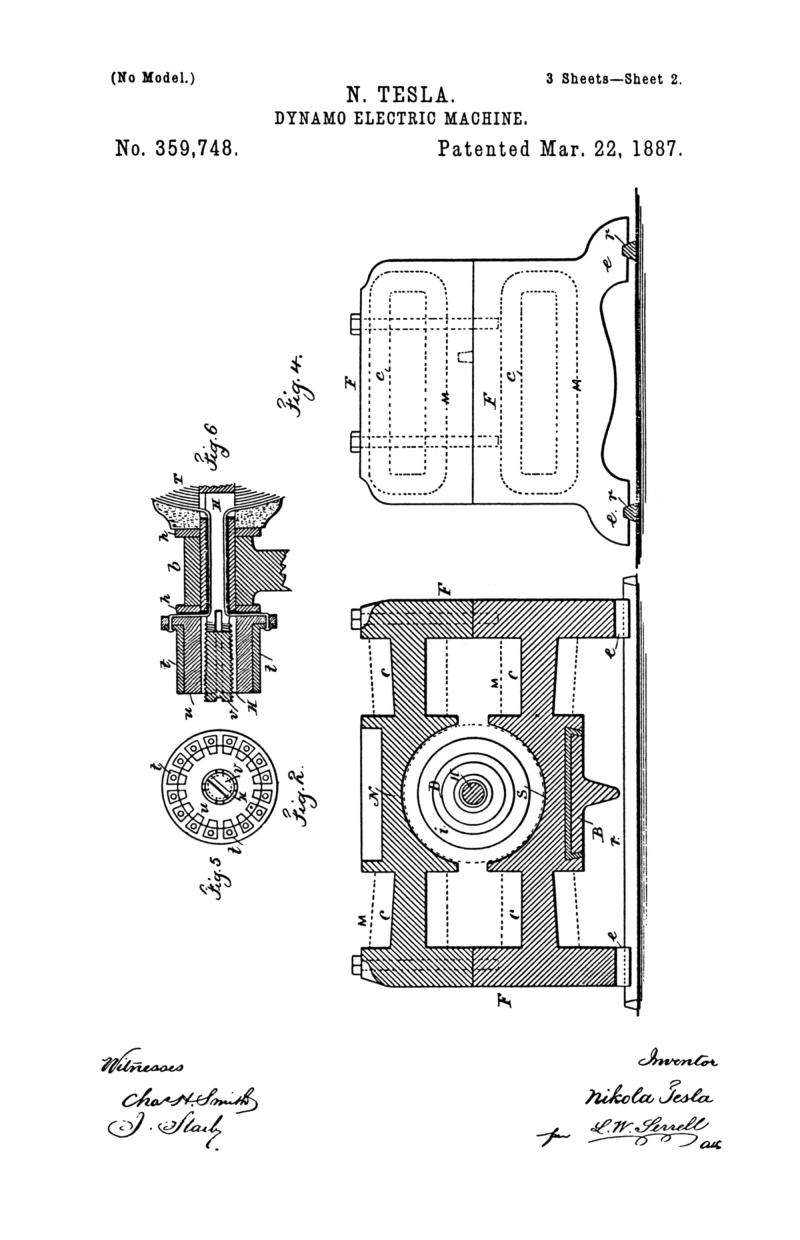 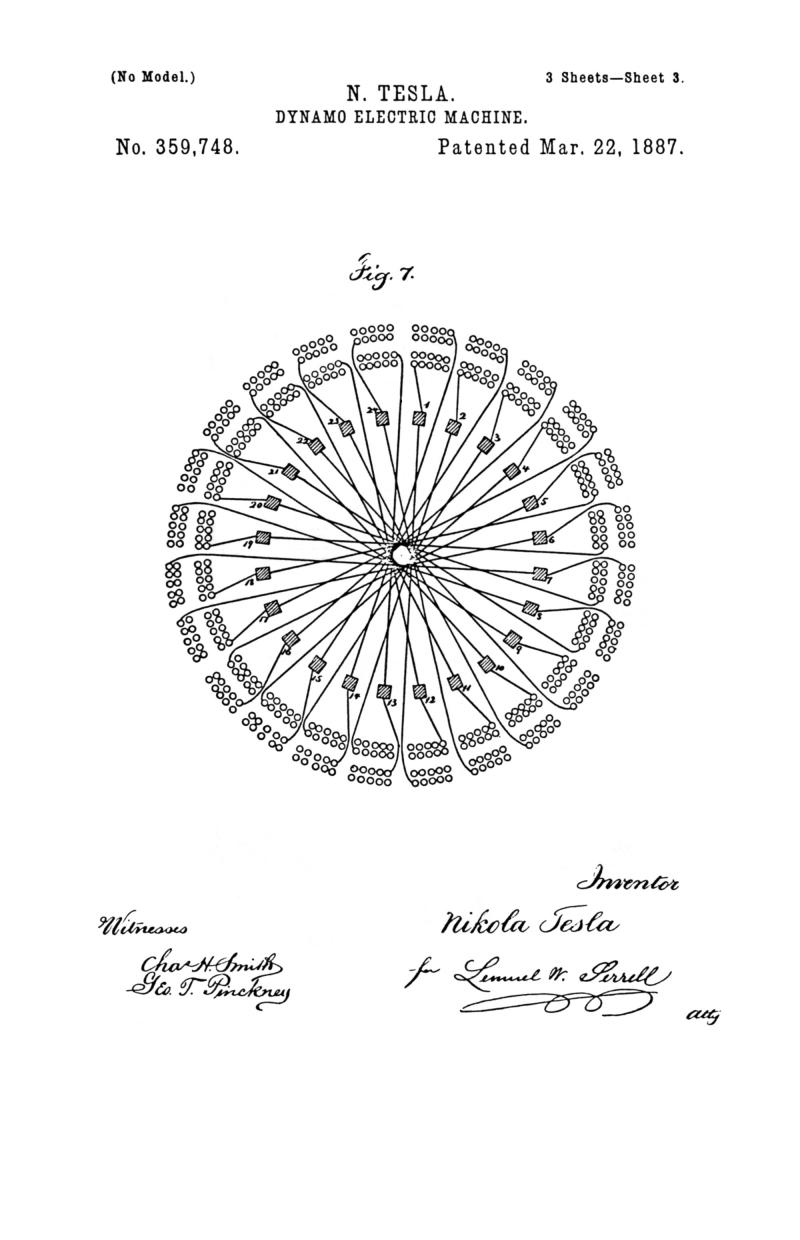