Be it known that I, NIKOLA TESLA, a subject of the Emperor of Austria-Hungary, from Smiljan, Lika, border country of Austria-Hungary, residing at New York, in the county and State of New York, have invented certain new and useful Improvements in Electric Generators, of which the following is a specification.

This invention is an improved form of electrical generator based upon the following well-known laws: First, that electricity or electrical energy is developed in any conducting-body by subjecting such body to a varying magnetic influence, and, second, that the magnetic properties of iron or other magnetic substance may be partially or entirely destroyed or caused to disappear by raising it to a certain temperature, but restored and caused to reappear by again lowering its temperature to a certain degree. These laws may be applied in the production of electrical currents in many ways, the principle of which is in all cases the same—viz., to subject a conductor to a varying magnetic influence, producing such variations by the application of heat, or, more strictly speaking, by the application or action of a varying temperature upon the source of the magnetism. This principle of operation may be illustrated by a simple experiment: Place end to end, and preferably in actual contact, a permanently-magnetized steel bar and a strip or bar of soft iron. Around the end of the iron bar or plate wind a coil of insulated wire. Then apply to the iron between the coil and the steel bar a flame or other source of heat which will be capable of raising that portion of the iron to an orange-red, or a temperature of about 600° centigrade. When this condition is reached, the iron somewhat suddenly loses its magnetic properties, if it be very thin, and the same effects produced as though the iron had been moved away from the magnet or the heated section had been removed. This change of condition, however, is accompanied by a shifting of the magnetic lines, or, in other words, by a variation in the magnetic influence to which the coil is exposed, and a current in the coil is the result. Then remove the flame or in any other way reduce the temperature of the iron. The lowering of its temperature is accompanied by a return of its magnetic properties, and another change of magnetic conditions occurs, accompanied by a current in an opposite direction in the coil. The same operation may be repeated indefinitely, the effect upon the coil being similar to that which would follow from moving the magnetized bar to and from the end of the iron bar or plate.

The device forming the subject of my present invention is an improved means of obtaining this result, the features of novelty in which the invention resides being, first, the employment of an artificial cooling device, and, second, inclosing the source of heat and that portion of the magnetic circuit exposed to the heat and artificially cooling the said heated part. These improvements are applicable generally to the generators constructed on the plan above described—that is to say, I may use an artificial cooling device in conjunction with a variable or varied or uniform source of heat. I prefer, however, to employ a uniform heat.

In the drawings I have illustrated a device constructed in accordance with my invention.

Figure 1 is a central vertical longitudinal section of the complete apparatus. Fig. 2 is a cross-section of the magnetic armature-core of the generator.

Let A represent a magnetized core or permanent magnet the poles of which are bridged by an armature-core composed of a casing or shell B inclosing a number of hollow iron tubes C. Around this core are wound the conductors E E', to form the coils in which the currents are developed. In the circuits of these coils are translating devices, as F F'.

D is a furnace or closed fire-box, through which the central portion of the core B extends. Above the fire is a boiler K, containing water. The flue L from the fire-box may extend up through the boiler.

G is a water-supply pipe, and H is the steam-exhaust pipe, which communicates with all the tubes C in the armature B, so that steam escaping from the boiler will pass through said pipes.

In the steam-exhaust pipe H is a valve V, to which is connected the lever I, by the movement of which the said valve is opened or closed. In such a case as this the heat of the fire may be utilized for other purposes after as much of it as may be needed has been applied to heating the core B. There are special advantages in the employment of a cooling device, in that the metal of the core B is not so quickly oxidized. Moreover, the difference between the temperature of the applied heat and of the steam, air, or whatever gas or fluid be applied as the cooling medium, may be increased or decreased at will, whereby the rapidity of the magnetic changes or fluctuations may be regulated.

In so far as my present invention, broadly, is concerned, the specific construction of the apparatus is largely immaterial. I do not, however, claim in this application, broadly, the application of a variable heat to vary the magnetic conditions of a field of force in which an induced conductor is contained.

1. In an electric generator, the combination, with a magnetized core or body and a conductor within the field of force produced thereby, of an inclosed source of heat applied to a portion of said core, and an artificial cooling device for reducing the temperature of the heated portion thereof, as set forth.

2. The combination, with a magnetized core or body and a conductor under influence thereof, of an inclosed source of heat applied to a portion of said core, means for bringing a cooling gas or fluid in contact with the heated portion of the core, and means for controlling the admission of the same.

3. The combination, with a magnetized core containing passages or channels, and coils wound thereon, of means for applying heat to a portion of the core, and a connection with a boiler for admitting steam into the channels, as set forth. 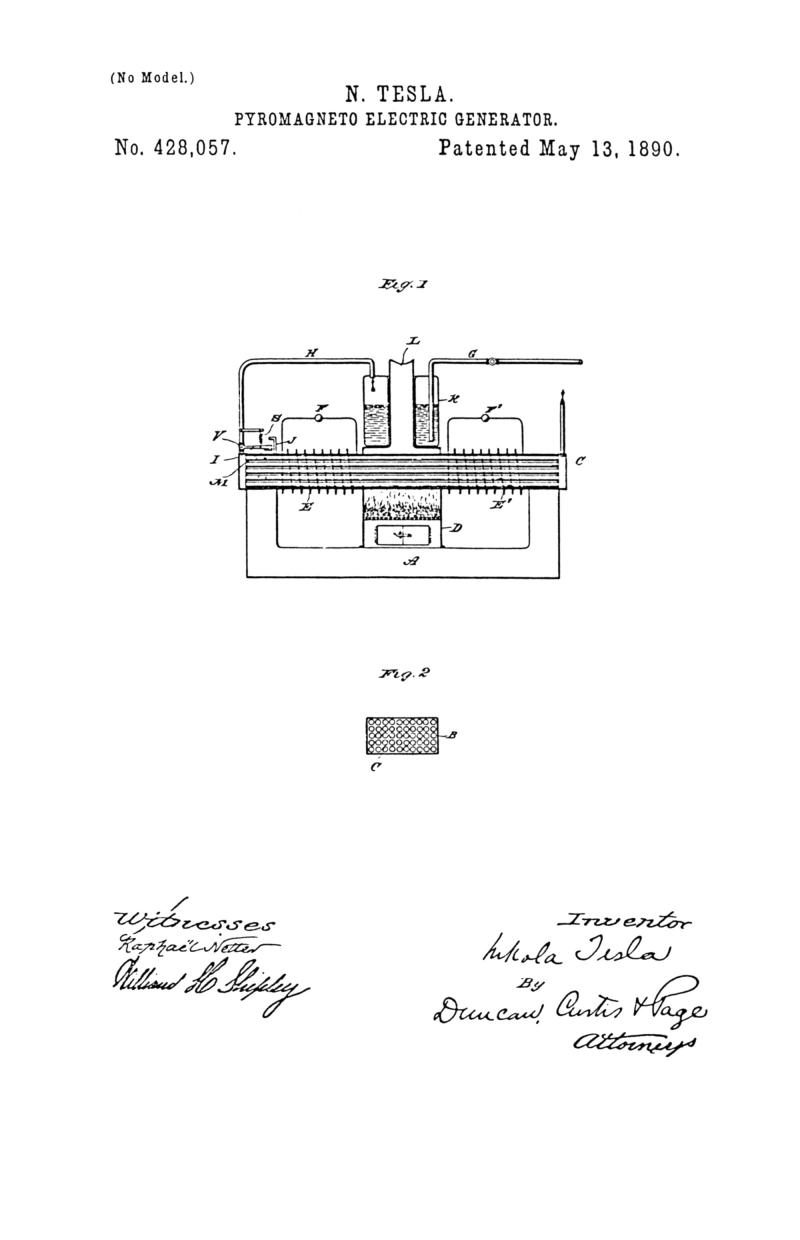