Be it known that I, NIKOLA TESLA, a subject of the Emperor of Austria-Hungary, from Smiljan, Lika, border country of Austria-Hungary, residing at New York, in the county and State of New York, have invented certain new and useful Improvements in Electrical Transformers or Induction Devices, of which the following is a specification, reference being had to the drawings accompanying and forming a part of the same.

This invention is an improvement in electrical transformers or converters, and has for its main objects the provision of means for securing, first, a phase difference between the primary and secondary currents adapted to the operation of my alternating-current motors and other like purposes, and, second, a constant current for all loads imposed upon the secondary.

In the accompanying drawings I have illustrated the construction above set forth.

Figure 1 is a cross-section of a transformer embodying my improvement. Fig. 2 is a similar view of a modified form of transformer, showing diagrammatically the manner of using the same.

A A is the main core of the transformer, composed of a ring of soft annealed and insulated or oxidized iron wire. Upon this core is wound the secondary circuit or coil B B. This latter is then covered with a layer or layers of annealed and insulated iron wires C C, wound in a direction at right angles to said secondary coil. Over the whole is then wound the primary coil or wire D D. From the nature of this construction it will soon be obvious that as long as the shield formed by the wires C is below magnetic saturation the secondary coil or circuit is effectually protected or shielded from the inductive influence of the primary, although I would state that on open circuit it may exhibit some electro-motive force. When the strength of the primary reaches a certain value, the shield C, becoming saturated, ceases to protect the secondary from inductive action, and current is in consequence developed therein. For similar reasons, when the primary current weakens, the weakening of the secondary is retarded to the same or approximately the same extent.

The specific construction of the transformer is largely immaterial. In Fig. 2, for example, the core A is built up of thin insulated iron plates or disks. The primary circuit D is wound next the core A. Over this is applied the shield C, which in this case is made up of thin strips or plates of iron properly insulated and surrounding the primary, forming a closed magnetic circuit. The secondary B is wound over the shield C. In Fig. 2, also, E is a source of alternating or rapidly changing currents. The primary of the transformer is connected with the circuit of the generator.

F is a two-circuit alternating-current motor, one of the circuits being connected with the main circuit from the source E, and the other being supplied with currents from the secondary of the transformer.

1. In an electrical transformer or induction device, the combination, with the main magnetic core and the primary and secondary coils or circuits, of a magnetic shield or screen interposed between said coils, as herein set forth.

2. In an electrical transformer or inductive device, the combination, with the magnetic core and the primary and secondary coils or circuits, of a magnetic shield or screen surrounding one of said coils only, as set forth.

3. In an electrical transformer or induction device, the combination, with the magnetic core and the primary and secondary coils wound thereon, of a magnetic shield or screen wound on or built up around one only of said coils, as described.

4. In an electrical transformer or induction device, the combination, with a main laminated magnetic core and primary and secondary coils thereon, of a subdivided or laminated magnetic shield or screen interposed between the coils, as set forth.

5. In an electrical transformer, the combination, with a magnetic core and primary and secondary coil wound thereon, of a magnetic shield or screen interposed between said coils and surrounding one of them and adapted to be or capable of being magnetically saturated by a predetermined current strength below the maximum in the primary, as set forth. 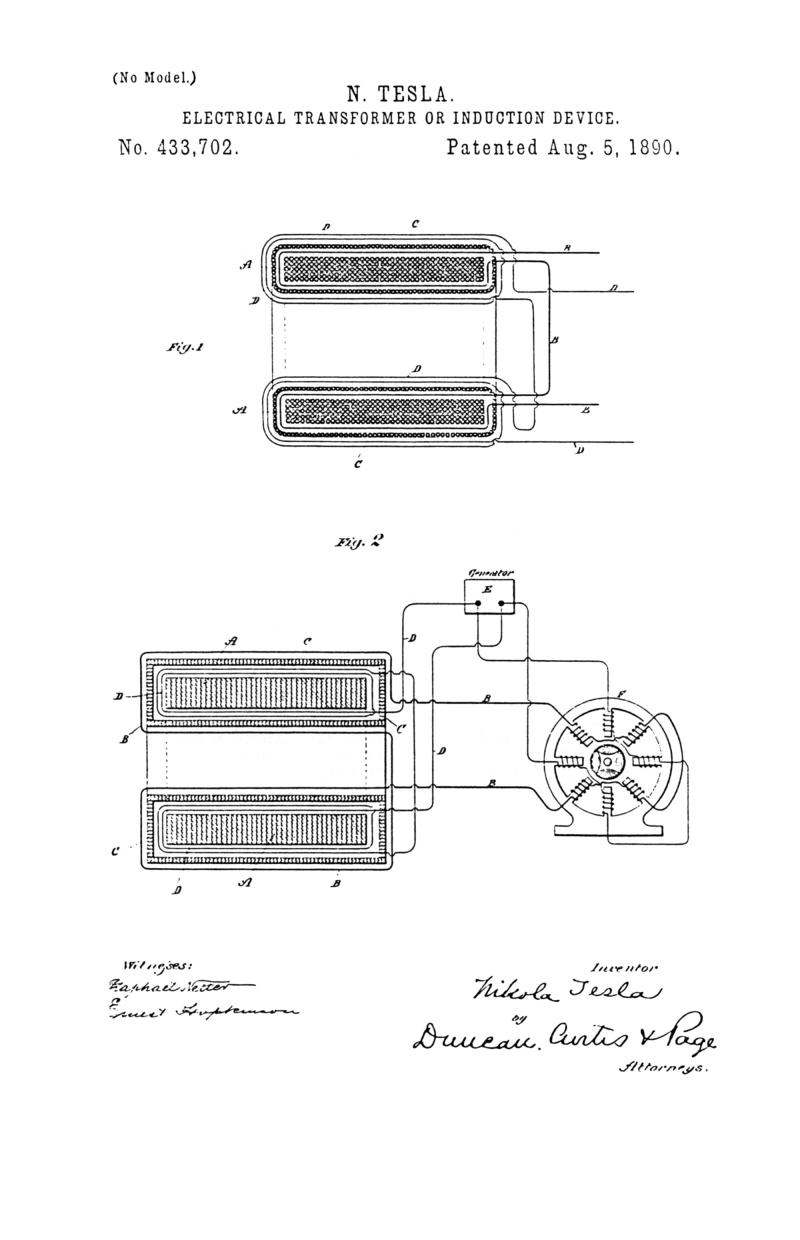