Among the various forms of alternating-current motors invented by me is one which I have described in other applications, and which is constructed as follows: I build a field-core with, say, four poles, between which is mounted an armature that is generally wound with closed coils. On two of the opposite poles of the field I wind primary coils, which are connected up in the main circuit. On the same cores I also wind secondary coils, which are closed through coils on the other pair or set of poles. In this motor when an alternating current is caused to pass through the primary coils it energizes directly one set of poles and induces currents in the secondary coils, which act to energize the other poles; but the phases of the current in the secondary coils may differ in time from those of the primary current, and hence a rotation or shifting of the poles is effected that imparts rotation to the motor.

These motors may be constructed in many other ways; but for purposes of this case it is only necessary to consider the specific form which I have thus generally described, as my improvements relate mainly to such form.

The object of my present invention is to render this form of motor more efficient and to improve its action or mode of operation.

In the motors constructed in accordance with this principle I bring two energizing-circuits into inductive relation in the motor itself—that is to say, the secondary currents which energize one set of the field-cores are induced in the motor itself, and the employment of an external induction device is thus avoided. The operation of these motors, however, is dependent upon the existence of a certain difference of phase between the currents in the primary and secondary coils. To obtain a difference of phase or lag that is suited to working conditions is the specific object of my present invention.

The following explanations will serve to illustrate the principle upon which said invention is based. Let it be assumed that an ordinary alternating-current generator is connected up in a circuit of practically no self-induction, such, for example, as a circuit containing incandescent lamps only. On the operation of the machine alternating currents will be developed in the circuit, and the phases of these currents will theoretically coincide with the phases of the impressed electro-motive force. Such currents may be regarded and designated as the “unretarded currents.”

The details of the improvements are illustrated in the drawings, in which—

In Fig. 1 let A designate the field-magnet of a motor which, as in all these motors, is built up of sections or plates. B C are polar projections upon which the coils are wound. Upon one pair of these poles, as C, I wind primary coils D, which are directly connected to the circuit of an alternating-current generator G. On the same poles I also wind secondary coils F, either side by side or over or under the primary coils, and these I connect with other coils E, which surround the poles B B. The currents in both primary and secondary coils in such a motor will be retarded or will lag behind the impressed electro-motive force; but to secure a proper difference in phase between the primary and secondary currents themselves I increase the resistance of the circuit of the secondary and reduce as much as practicable its self-induction. I do this by using for the secondary circuit, particularly in the coils E, wire of comparatively small diameter and having but few turns around the cores; or I use some conductor of higher specific resistance, such as German silver; or I may introduce at some point in the secondary circuit an artificial resistance R. Thus the self-induction of the secondary is kept down and its resistance increased with the result of decreasing the lag between the impressed electro-motive force and the current in the primary coils and increasing the difference of phase between the primary and secondary currents.

In the operation of this motor the current impulses in the primary coils induce currents in the secondary coils, and by the conjoint action of the two the points of greatest magnetic attraction are shifted or rotated.

In practice I have found it desirable to wind the armature with closed coils in which currents are induced by the action thereon of the primaries.

I do not claim, broadly, herein the method of operating motors by inducing in one circuit currents by means of those in another, nor the other features herein not specifically pointed out in the claims, having personally filed applications for such features.

2. The combination, in a motor, of a primary energizing-coils adapted to be connected with the circuit of a generator and a secondary energizing-circuit in inductive relation thereto, the two circuits being of different self-induction, as herein set forth. 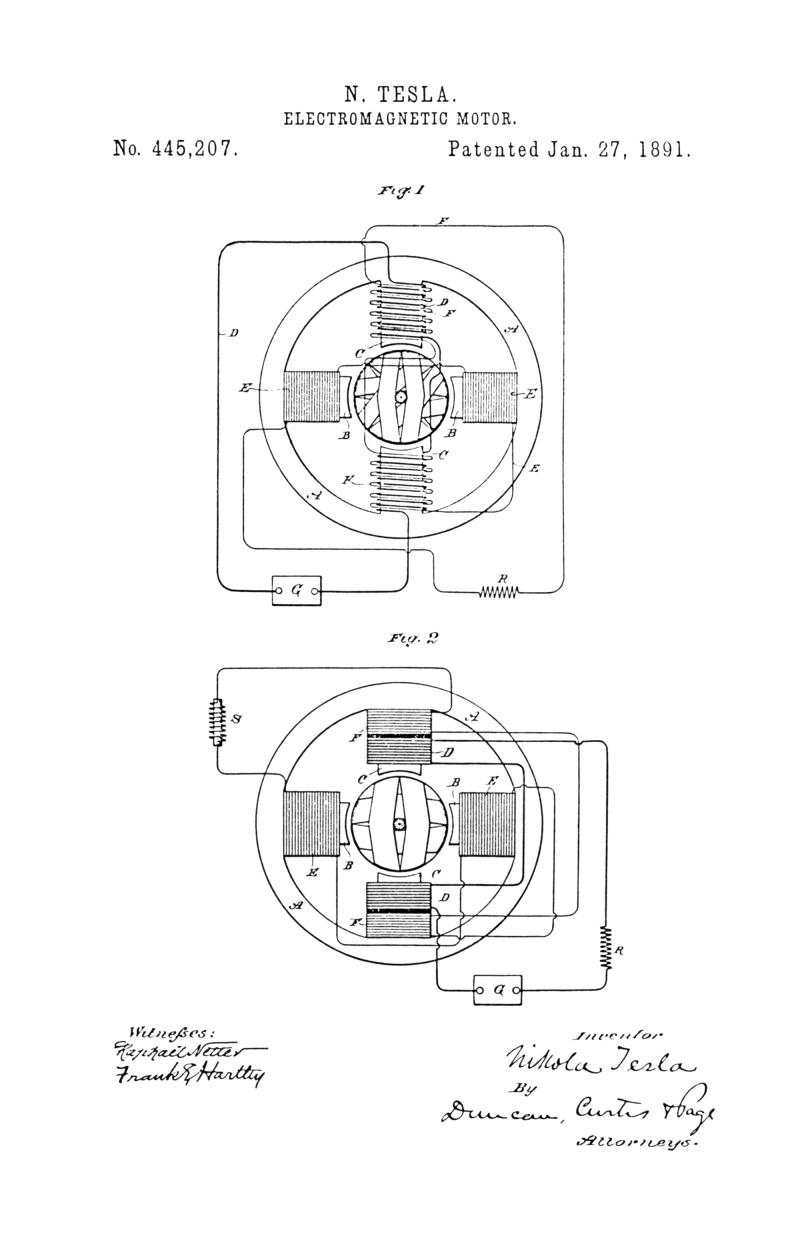