Be it known that I, NIKOLA TESLA, a subject of the Emperor of Austria-Hungary, residing at New York, in the county and State of New York, have invented certain new and useful Improvements in Methods of Operating Arc Lamps, of which the following is a specification.

This invention consists in an improved method of operating electric-arc lamps which are supplied with alternating or pulsating currents.

It has now become a common practice to run arc lamps by alternating or pulsating as distinguished from continuous currents; but an objection to such systems exists in the fact that the arcs emit a pronounced sound, varying with the rate of the alternations or pulsations of current, but under any circumstances constituting an objectionable and disagreeable feature, for which heretofore no effective remedy has been found or proposed. This noise is probably due to the rapidly alternating heating and cooling and consequent expansion and contraction of the gaseous matter forming the arc which corresponds with the periods or impulses of the current, for I have succeeded in abating it and producing quiet and smoothly-acting lamps by increasing, per unit of time, the number of alternations or pulsations of the current producing the arc to such an extent that the rate of the vibrations or changes in the arc producing the noise approximately equals or exceeds that which is generally regarded as the limit of audition. For example, I may use a generator which produces ten thousand or more alternations of current per second. In such a case the periodical heating and cooling of the arc would occur with such rapidity as to produce little or no perceptible effect upon the ear.

There are a number of ways in which the current may be varied at a rate exceeding the limit of audition, but probably the most practicable known to me at present is by the use of an alternating-current generator with a large number of poles and specially constructed for the purpose. Such a generator, for the purpose of the illustration of this case, I have shown in the accompanying drawings.

A is an annular magnetic frame supported by the cross-bars or brackets B, provided with feet C, upon which the machine rests. The interior of the annulus A is provided with a large number of projections or pole-pieces D. These may be formed or applied in a variety of ways—as, for example, by milling transverse grooves E.

Owing to the very large number and small size of the poles and the spaces between them, I apply the exciting or field coils by winding an insulated conductor F zigzag through the grooves, as shown in Fig. 5, carrying said wire around the annulus to form as many layers as is desired. In this way the pole-pieces D will be energized with alternately opposite polarity around the entire ring.

For the armature I employ a spider or circular frame G on a driving-shaft H, mounted in bearings in the brackets B. This spider carries a ring J, turned down, except at its edges, to form a trough-like receptacle for a mass of fine annealed iron wires K, which are wound in the groove to form the core proper for the armature-coils. Pins L are set in the sides of the ring J, and the coils M are wound over the periphery of the armature-structure and around the pins. The coils M are connected together in series, and these terminals N carried through the hollow shaft H to contact-rings P P, from whence the currents are taken off by brushes O. In this way a machine with a very large number of poles may be constructed. It is easy, for instance, to obtain in this manner three hundred and seventy-five to four hundred poles in a machine that may be safely driven at a speed of fifteen hundred or sixteen hundred revolutions per minute, which will produce ten thousand or eleven thousand alternations of current per second. Arc lamps R R are shown in diagram as connected up in series with the machine in Fig. 2. If such a current be applied to running arc lamps, the sound produced by or in the arc becomes practically inaudible, for by increasing the rate of change in the current, and consequently the number of vibrations per unit of time of the gaseous material of the arc up to or beyond ten thousand or eleven thousand per second, or to what is regarded as the limit of audition, the sound due to such vibrations will not be audible. The exact number of changes or undulations necessary to produce this result will vary somewhat according to the size of the arc—that is to say, the smaller the arc the greater the number of changes that will be required to render it inaudible within certain limits. Of course, as the rate of alternations or undulations for a given size of arc becomes very high the sound produced is less perceptible, and hence for some purposes the actual limit of audition may only be approached, provided the sound be rendered practically inaudible.

Another advantage gained by increasing as above set forth the number of alternations is that the arc acts more like that produced by a continuous current, in that it is more persistent, owing to the fact that the time interval between undulations is so small that the gaseous matter cannot cool down so far as to increase very considerably in resistance.

The method of abating or rendering inaudible the sound emitted by arc lamps supplied with or operated by an alternating or pulsating current by increasing the rate of such alternations or pulsations up to that of the limit of audition, as set forth. 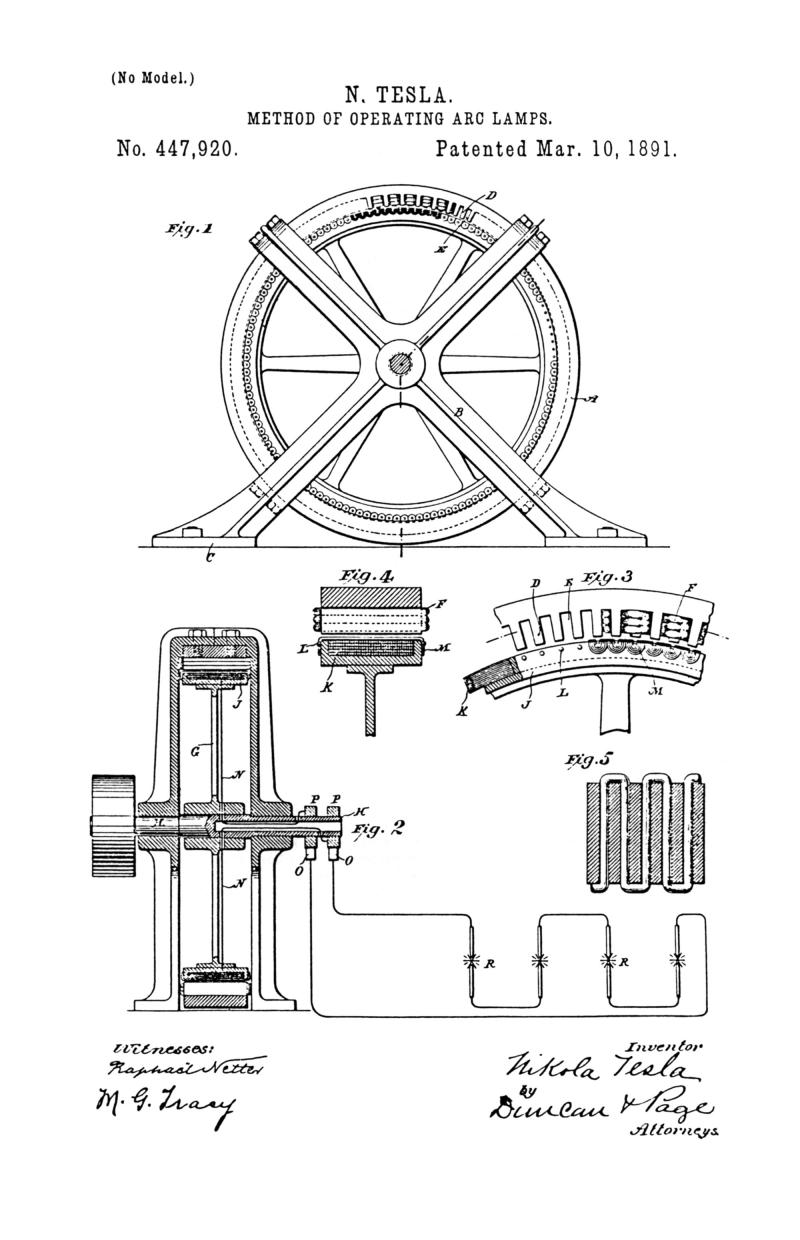