A Plaque Unveiled for Nikola Tesla

On February 3, 1989, a commemorative plaque was unveiled for Nikola Tesla in New York City. It was permanently installed in a prominent position in the lobby of the United Engineering Center at 345 East 47th Avenue, across from the United Nations headquarters. The only others who are individually noted on the lobby walls of the Center are Andrew Carnegie, Alfred Noble, and Ambrose Swasey. The Tesla plaque had finally found a home.

In 1977, as part of the United States Bicentennial celebration activities, the plaque was originally created for installation at the Hotel New Yorker where Tesla lived in his later years. However, that plan was abandoned after the hotel was purchased by the Rev. Sun Myung Moon's Unification Church of America. Since that time, the plaque has been held in safekeeping by the Yugoslav Consulate in New York.

Although the American Institute of Electrical and Electronics Engineers (IEEE) officiated at the unveiling, the Institute had done nothing in 1988 to commemorate the 100th anniversary of Tesla's presentation of the rotating magnetic field principle. It was on May 16, 1888, in New York, that Tesla gave his important lecture announcing this new technology before a meeting of the American Institute of Electrical Engineers - forerunner of the IEEE. After the lecture, he invited those in attendance to his laboratory to witness the operation of motors based on the rotating magnetic field principle. It was Tesla's inventions, based on this principle that revolutionized electrification not only in America, but the world - the alternating current system which benefits everyone today. Indeed, his announcement and demonstration was a most historic event.

Announcements were sent out by the IEEE to attend the unveiling, but only a few short days before the event. William Terbo, Tesla's grandnephew, received an invitation only in time to rush in as the drape was being pulled from the plaque. Thus, it has been shown again that Tesla is not yet held in primacy of thought by elitist historians of technology to have had this event appropriately planned and scheduled.

The IEEE History Committee, in its advisory role to the Board of Directors of the IEEE, had excised Tesla in its deliberations for commemorative events. There has been an aversion toward Tesla because he exemplified the independent flamboyant inventor. The IEEE History Committee has, instead extolled the corporate inventor who nurses an invention through its industrial development. It was necessary for Tesla to fight the corporate marketplace in the advancement of his inventions by becoming his own development and marketing enterprise! Certainly marvelous example for young inventors today.

It is somewhat ironic that it took a foreign national, Milan Bulajic, Yugoslav minister plenipotentiary, who has a great interest in international recognition of Tesla, to push for the installation of the plaque at the United Engineering Center in America. Caught up in the competitive drive of industry today, there seems to be few who recognize society's great need for the creative genius of independent spirit - the nonpareil. 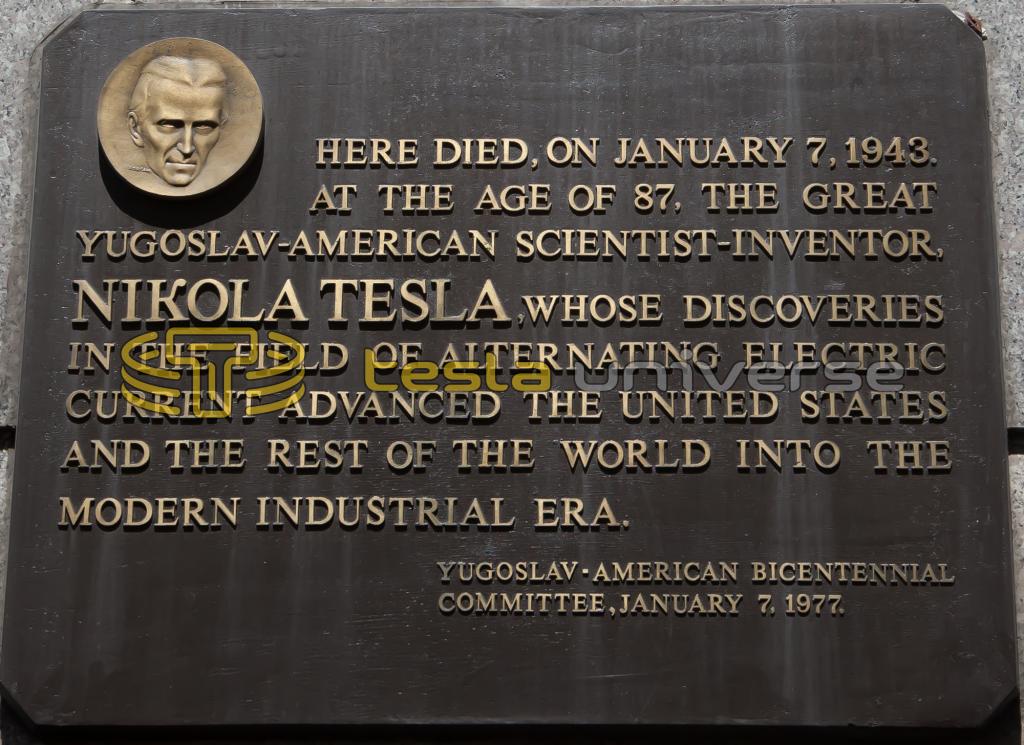 HERE DIED, ON JANUARY 7, 1943 AT THE AGE OF 87, THE GREAT YUGOSLAV-AMERICAN SCIENTIST-INVENTOR NIKOLA TESLA, WHOSE DISCOVERIES IN THE FIELD OF ALTERNATING ELECTRIC CURRENT ADVANCED THE UNITED STATES AND THE REST OF THE WORLD INTO THE MODERN INDUSTRIAL ERA.