The Willock mine, belonging to the Monongahela Gas Coal company and situated in the first pool of the Monongahela coal region is now operated with a complete alternating current motor plant. The machines furnish power in the production of coal, the working of the pump and also in the operation of an enormous ventilator which keeps a constant draught of pure air in the mine. In addition the mine is illuminated by the alternating current system.

The cut represents the Hercules mining machine equipped with the Tesla alternating current motor of the Westinghouse company used in the mine. This is the first mine in the Pennsylvania coal region where the alternating current system is utilized extensively. A correspondent of the Western Electrician who recently visited the mine was much indebted to John Werner, the mine foreman, a man who is himself a mechanical genius of no mean standing. During a conversation with him, he said: “I believe that electric mining has no greater prospects anywhere than just in the coal fields of Pennsylvania. The reasons for this are so many that I hardly know where to commence to enumerate them. Coal mining in Pennsylvania was never such a poor trade as it is now, in fact it is so bad that a native born American will have nothing more to do with the work. The result has been that the business has fallen into the hands of foreigners of the very lowest class, such as Hungarians, Poles and Italians. Then again the price of coal has gone down to such an extent, the result of course of competition, that it is impossible to get any intelligent men who will do the work for the small wages a miner is able to make. This condition of affairs caused the coal operators to hail the application of electricity to a coal mine with great satisfaction and I believe that it will not be long before every mine in the country will be operated by electricity. The advantages afforded by electricity in the operation of a mine are so manifold that its use is bound to become general. For instance, where a coal digger was able to earn on the average $2.25 per day, the machine miner makes $3. Why? because while the operator pays the miner less for the production of each ton of coal, the man can produce so much more with the aid of his machine that he can make better wages now and the work is less laborious. The operator pays the coal digger $0.79 per ton of coal, but the production of each ton with the aid of electricity costs him only $0.45, so you see there is a pure gain for the operator of $0.30 for each ton.”

The electric plant consists of a thirty horse power quarter phase generator of a capacity sufficient to carry seven motors when cutting coal, at the limit of the capacity of the coal company. The generator is self-acting, self-regulating, and so wound that as the load increases, the e. m. f. rises. By the aid of a hand rheostat, the adjustments can be so made that the falling off in the speed of the engine and the drop in the line may be compensated for and a very close approximation to constant e. m. f. at the motors is obtained. After the hand rheostat is once adjusted, it is unnecessary to make further adjustments for the self-regulating devices are automatic. Three wires from the collector at the end generator shaft pass from the switch-board and main line switches directly into the mine. On the switch-board is a direct reading voltmeter and an ammeter. The e. m. f. at the motor is 300 volts, in this installation.

Where the distance becomes very great, a higher e. m. f. may of course be used. The mine is wired with high class rubber covered wire and the insulation of each wire is practically continuous from the time the wire leaves the main switch in the power house until it reaches the end of the circuit. At the entrance of each room and also at convenient points through the mine, switches are located and safety catches inserted. This insures safety from short-circuiting and also allows any portion of the circuit to be cut off from the generator without interfering with the work in other parts of the mine. From the switch in the room to the coal-cutting machine the current is carried by a three-wire cable. This cable is highly insulated and covered with a protecting braid, so that though it is frequently allowed to lie on the damp floor and even in pools of water, yet no inconvenience is noticed arising from this. It is necessary only to have a jaw switch at the motor with which the circuit can be opened and closed. No regulator of any kind is used. The only auxiliary apparatus connected with the motor, with which the operator of the machine has anything to do, is the switch to turn the current on and off. The motor is completely covered and there is no possible chance of getting a shock through careless handling, it is claimed. 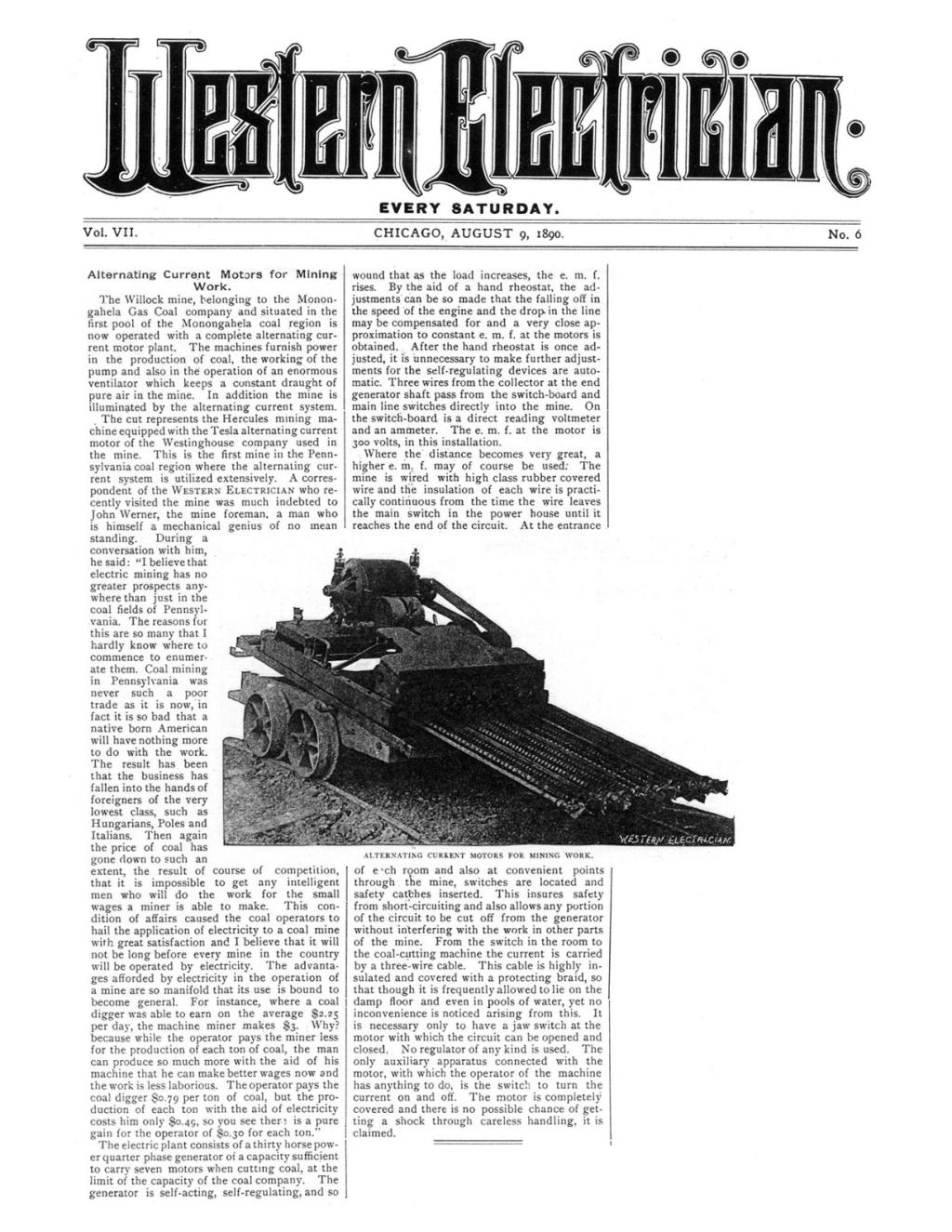