Our note on this subject on page 186 in our issue of the 22nd of August has called forth three or four columns of comment from Mr. Tesla in other journals, but he has not even favoured us with an advance proof of his critical remarks. This is perhaps an oversight.

The main difference of opinion, we think, lies in a nutshell. Mr. Tesla holds that if an increasing excitation is applied to an iron core it affects the outside first, and the lines of induction, or lines of force, accumulate in the outside till the iron becomes more or less saturated, and then penetrate to the inside. The outside thus magnetically screens the inside. If the core is laminated, so that there are no Foucault currents, this cannot occur. The line integral of the magnetic force taken round any circuit interlinked with the magnetising coils is 4 π n C, where n is the number of turns and C the current in C.G.S. This interlinked circuit may be taken through the centre of the core or near the outside, and has the same value in each case. This value is independent of the time. If the iron is not laminated, Foucault currents will be generated in a direction opposed to the primary electromotive force, and these will introduce a time lag. At any instant the integral of magnetic force round a circuit passing along the outside of the core is still 4 π n C, but along any circuit cutting the iron it is 4 π n C + 4 π C1, where C1 is the surface integral of the Foucault current interlinked with the circuit in question, C and C1 having positive or negative values according to their direction. As C1 depends on the time rate of change of C there is thus a time lag. For instance, if a current is suddenly turned on a solid cored electromagnet, currents in the opposite direction circulate in the iron, so that at first they partly demagnetise the centre. They die away gradually, and the centre is then magnetised as fully as the outside. The lag is here produced entirely electrically, not by any sort of magnetic screening. Mr. Tesla develops his magnetic screening in this way. He wants to get a set or poles on a motor to lag behind another set. He therefore excites the leading poles with an alternating current in the usual way. The lagging poles have their cores wound with iron wire first. The iron wire is not wound parallel to the induction in the core, but at right angles to it, and is referred to as a closed magnetic circuit. Why is not clear, for it is not interlinked with any exciting circuit whatever. Outside this is wound the exciting coils proper. Mr. Tesla thinks this coil of iron wire screens magnetically. We think it acts as a secondary electric circuit. It gets slightly magnetised also, but the direction of magnetisation is at right angles to the wire at every point, not round what Mr. Tesla calls a closed magnetic circuit.

Mr. Tesla also described a transformer. In this a ring of iron wire is taken as core, as usual. It is wound with secondary, also as usual. The secondary is then coated with iron wire. Apparently we were in error when, in our previous note, we said this shield was laminated in the wrong direction; the lamination in the wrong direction - that is, not parallel to the induction - is in the motor, and, from the description, one at least of the transformers has its “screen” laminated in the right direction. Over this “screen” is wound the primary. Mr. Tesla thinks this intermediate layer of iron acts as a magnetic screen. If it is laminated in the right direction, so as to have no Foucault currents, the induction at any instant in the inner core is (4 π n C + 4 π n1 C1)µ/l, where n1 and C1 are the secondary turns and current, and l the length of the core circuit. The induction in the outer “screen” is 4 π n C µ/l, and there is no time lag. The effect of such an arrangement is that the primary coil is interlinked with more iron than the secondary, so the effect is just the same as putting a choking coil in series with the primary of an ordinary transformer. Mr. Tesla says triumphantly we are wrong, for it does screen; we say that he has misinterpreted his results.

As to the success of the Tesla motor, we are quite aware that it is in commercial use; we have seen many accounts of it, and have seen it working in the States. We do not deny its utility in many of the cases he brings forward; but the Tesla motor was heralded as a solution of the alternating current motor problem, and here we think it has failed. Nobody is readier than we are to accord Mr. Tesla full credit for his ingenuity and facility in inventing and designing curious motors. We feel, however, that his explanations of the phenomena even in his own inventions are somewhat eccentric. However, great inventions have before now been made on unsound theories. 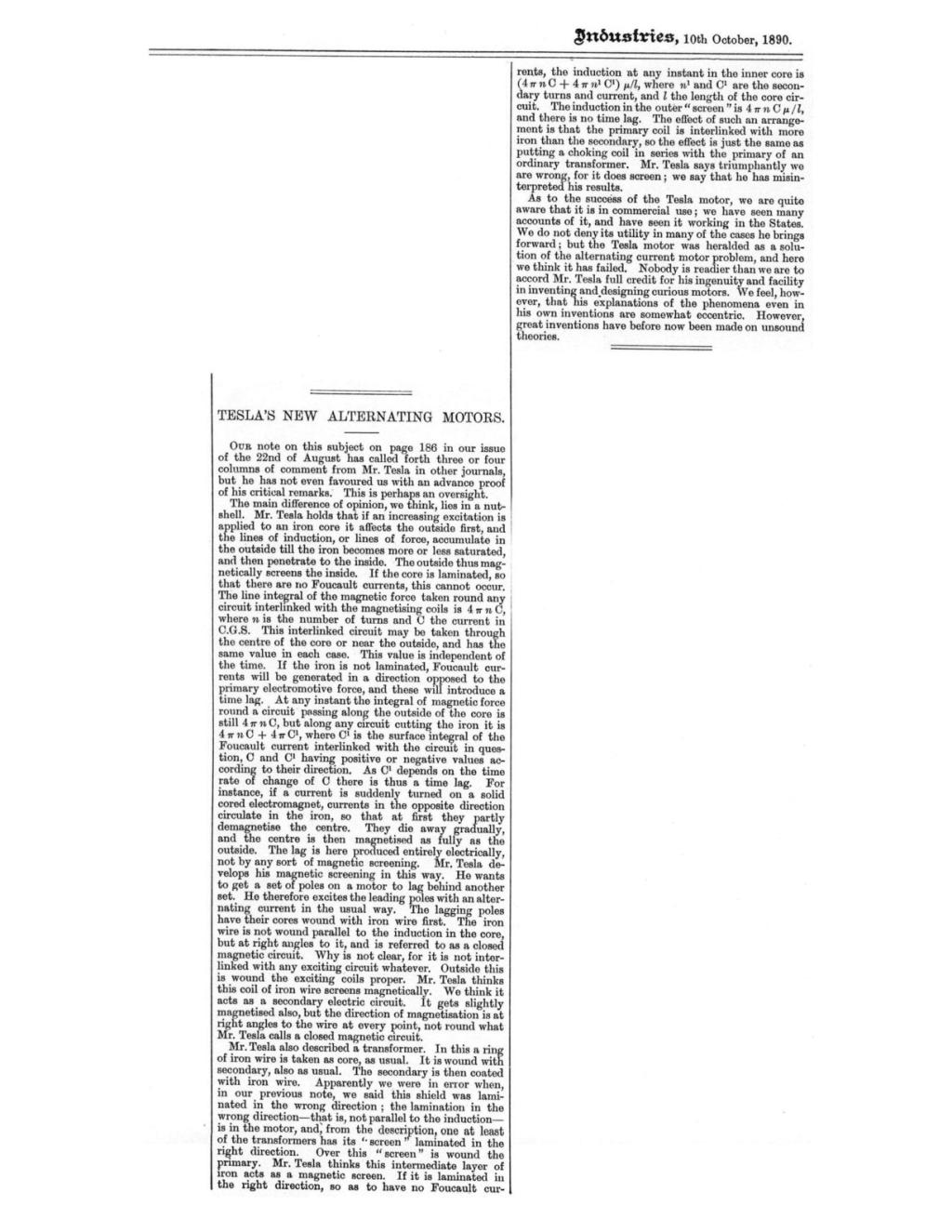