Can Bridge the Gap to Mars

Nikola Tesla on His Wireless System for the Transmission of Energy.

You have called me an “inventor of some useful pieces of electrical apparatus.” It is not quite up to my aspirations, but I must resign myself to my prosaic fate. I cannot deny that you are right.

Nearly four million horse power of waterfalls are harnessed by my alternating current system of transmission, which is like saying that one hundred million men untiring, consuming nothing, receiving no pay — are laboring to provide for one hundred million tons of coal annually. In this great city the elevated roads, the subways, the street railways are operated by my system, and the lamps and other electrical appliances get the current through machinery of my invention. And as in New York so all the world over where electricity is introduced. The telephone and incandescent lamp fill specific and minor demands, electric power meets the many general and sterner necessities of life. Yes, I must admit, however reluctantly, the truth of your unflattering contention.

But the greater commercial importance of this invention of mine is not the only advantage I have over my celebrated predecessors in the realm of the useful, who have given us the telephone and the incandescent lamp. Permit me to remind you that I did not have, like Bell, such powerful help as the Reis telephone, which reproduced music and only needed a deft turn of an adjusting screw to repeat the human voice; or such vigorous assistance as Edison found in the incandescent lamps of King and Starr, which only needed to be made of high resistance. Not at all. I had to cut the path myself, and my hands are still sore. All the army of my opponents and detractors was ever able to drum up against me in a fanatic contest has simmered down to a short article by an Italian — Prof. Ferraris — dealing with an abstract and meaningless idea of a rotating magnetic pole and published years after my discovery, months even after my complete disclosure of the whole practically developed system in all its essential universally adopted features. It is a publication, pessimistic and discouraging, devoid of the discoverer’s virility and force, devoid of results, utterly wanting in the faith and devotion of the inventor, a defective and belated record of a good but feeble man whose only response to my whole-souled brother greeting was a plaintive cry of priority — a sad contrast to the strong and equanimous Schallenberger, a true American engineer, who stoically bore the pain that killed him.

A fundamental discovery or original invention is always useful, but it is often more than that. There are physicists and philosophers to whom the marvelous manifestations of my rotating magnetic field, the suggestive phenomena of rotation without visible connection, the ideal beauty of my induction motor with its contactless armature, mean quite as much as the thousands of millions of dollars invested in enterprises of which it is the foundation.

And this is true of all my discoveries, inventions, and scientific results which I have since announced, for I have never invented what immediate necessity suggested, but what I found as most desirable to invent, irrespective of time. Let me tell you only of one — my “magnifying transmitter,” a machine with which I have passed a current of one hundred amperes around the globe, with which I can make the whole earth loudly repeat a word spoken in the telephone, with which I can easily bridge the gulf which separates us from Mars. Do you mean to say that my transmitter is nothing more than a “useful piece of electrical apparatus?”

I do not wish to enlarge on this for obvious reasons. To be compelled by taciturn admirers to dwell on my own achievements is hurting my delicate sensibilities, but as I observe your heroic and increasing efforts in praising your paper, while your distinguished confreres maintain on its merits a stolid silence, I feel that there is, at least, one man in New York able to appreciate the incongeniality of the correspondence. Allow me to ask you just one or two questions in regard to a work which I began in 1892, inspired by a high tribute from Lord Rayleigh at the Royal Institution, most difficult labor which I have carried on for years, encouraged by the sympathetic interest and approval of Hemholtz, Lord Kelvin, and my great friends, Sir William Crookes and Sir James Dewar, ridiculed by small men whose names I have seen displayed in vulgar and deceptive advertisements. I refer to my system of wireless transmission of energy.

The principles which it involves are eternal. We are on a conducting body, insulated in space, of definite and unchangeable dimensions and properties. It will never be possible to transmit electrical energy economically through this body and its environment except by essentially the same means and methods which I have discovered, and the system is so perfect now that it admits of but little improvement. Since I have accepted as true your opinion, which I hope will not be shared by posterity, would you mind telling a reason why this advance should not stand worthily beside the discoveries of Copernicus? Will you state why it should not be ever so much more important and valuable to the progress and welfare of man?

We could still believe in the geocentric theory and yet advance virtually as we do. The work of the astronomer would suffer, for some of his deductions would rest on erroneous assumptions. But, after all, we shall never know the intimate nature of things. So long as our perceptions are accurate our logic will be true. No one can estimate to what an extent the great knowledge he conveyed has been instrumental in developing the power of our minds and furthering discovery and invention. Yet, it has left all the pressing material problems confronting us unsolved.

Now my wireless system offers practical solutions for all. The aerial navigation, which now agitates the minds, is only one of its many and obvious applications equally consequential. The waterfalls of this country alone, its greatest wealth, are adequate to satisfy the wants of humanity for thousands of years to come. Their energy can be used with the same facility to dig the Panama Canal as to operate the Siberian Railway or to irrigate and fertilize the Sahara. The Anglo-Saxon race has a great past and present, but its real greatness is in the future, when the water power it owns or controls shall supply the necessities of the entire world.

As to universal peace — if there is nothing in the order of nature which makes war indispensable to the safe and sane progress of man, if that utopian existence is at all possible, it can be only attained through this very means, for all international friction can be traced to but one cause — the immense extension of the planet. My system of wireless transmission completely annihilates distance in all departments of human activity.

If this does not appeal to you sufficiently to recognize in me a discoverer of principles, do me, at least, the justice of calling me an “inventor of some beautiful pieces of electrical apparatus.” 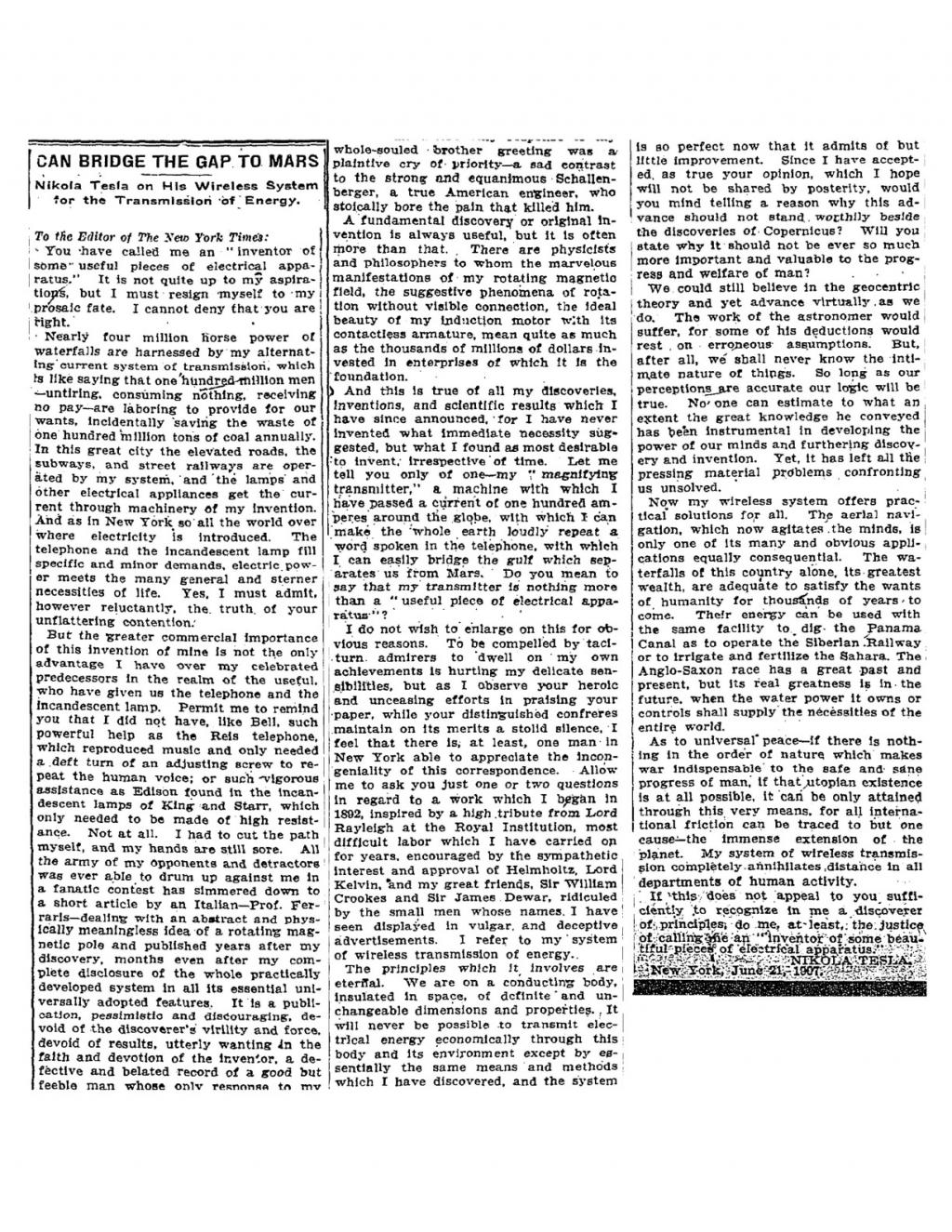