Correspondence: Experiments on the Electric Discharge in Vacuum Tubes

TO THE EDITOR OF THE ELECTRICIAN.

Sir: In The Electrician for July 17th there is a description of some experiments made by Mr. Nikola Tesla, which are somewhat similar in character to those shown by me to the Cambridge Philosophical Society, in February, and to the London Physical Society, on their visit to Cambridge, on May 9th. Mr. Tesla seems to ascribe the effects he observed to electrostatic action, and I have no doubt, from the description he gives of his method of conducting his experiments, that in them electrostatic action plays a very important part. He seems, however, to have misunderstood my position, with respect to the cause of these discharges, which is not, as he implies, that luminosity in tubes without electrodes cannot be produced by electrostatic action, but that it can also be produced when this action is excluded. As a matter of fact, it is very much easier to get the luminosity when these electrostatic effects are operative than when they are not. As an illustration of this I may mention that the first experiment I tried with the discharge of a Leyden jar produced luminosity in the tube, but it was not until after six weeks’ continuous experimenting that I was able to get a discharge in the exhausted tube which I was satisfied was due to what is ordinarily called electro-dynamic action. It is advisable to have a clear idea of what we mean by electrostatic action. If, previous to the discharge of the jar, the primary coil is raised to a high potential, it will induce over the glass of the tube a distribution of electricity. When the potential of the primary suddenly falls, this electrification will re-distribute itself, and may pass through the rarefied gas and produce luminosity in doing so. Whilst the discharge of the jar is going on it is difficult, and, from a theoretical point of view, undesirable to separate the effect into two parts, one of which is called electrostatic, the other electro-magnetic; what we can prove is that in this case the discharge is not such as would be produced by electromotive forces derived from a potential function. In my experiments the primary coil was connected to earth, and, as a further precaution, the primary was separated from the discharge tube by a screen of blotting paper, moistened with dilute sulphuric acid and connected to earth. Wet blotting paper is a sufficiently good conductor to screen off a stationary electrostatic effect, though it is not a good enough one to stop waves of alternating electromotive intensity. When showing the experiments to the Physical Society I could not, of course, keep the tubes covered up, but, unless my memory deceives me, I stated the precautions which had been taken against the electrostatic effect. To correct misapprehension I may say that I did not read a formal Paper to the Society, my object being to exhibit a few of the most typical experiments. The account of the experiments in The Electrician was from a reporter’s note, and was not written or even read by me. I have now almost finished writing out, and hope very shortly to publish, an account of these and a large number of allied experiments, including some analogous to those mentioned by Mr. Tesla on the effect of conductors placed near the discharge tube, which I find, in some cases, to produce a diminution, in others an increase, in the brightness of the discharge, as well as some on the effect of the presence of substances of large specific inductive capacity. These seem to me to admit of a satisfactory explanation, for which, however, I must refer to my Paper. I am glad to be able to take this opportunity of mentioning that I find that the luminosity produced in a vacuum tube placed near a wire through which a Leyden jar is discharged, was noticed by Hittorf, and described by him in Weidemann’s Annalen, Vol. XXI., p. 138. As, however, the discharge filled his tube, and did not pass as a ring, I should imagine that the cause of the discharge was primarily electrostatic. — I am, Sir, &c. 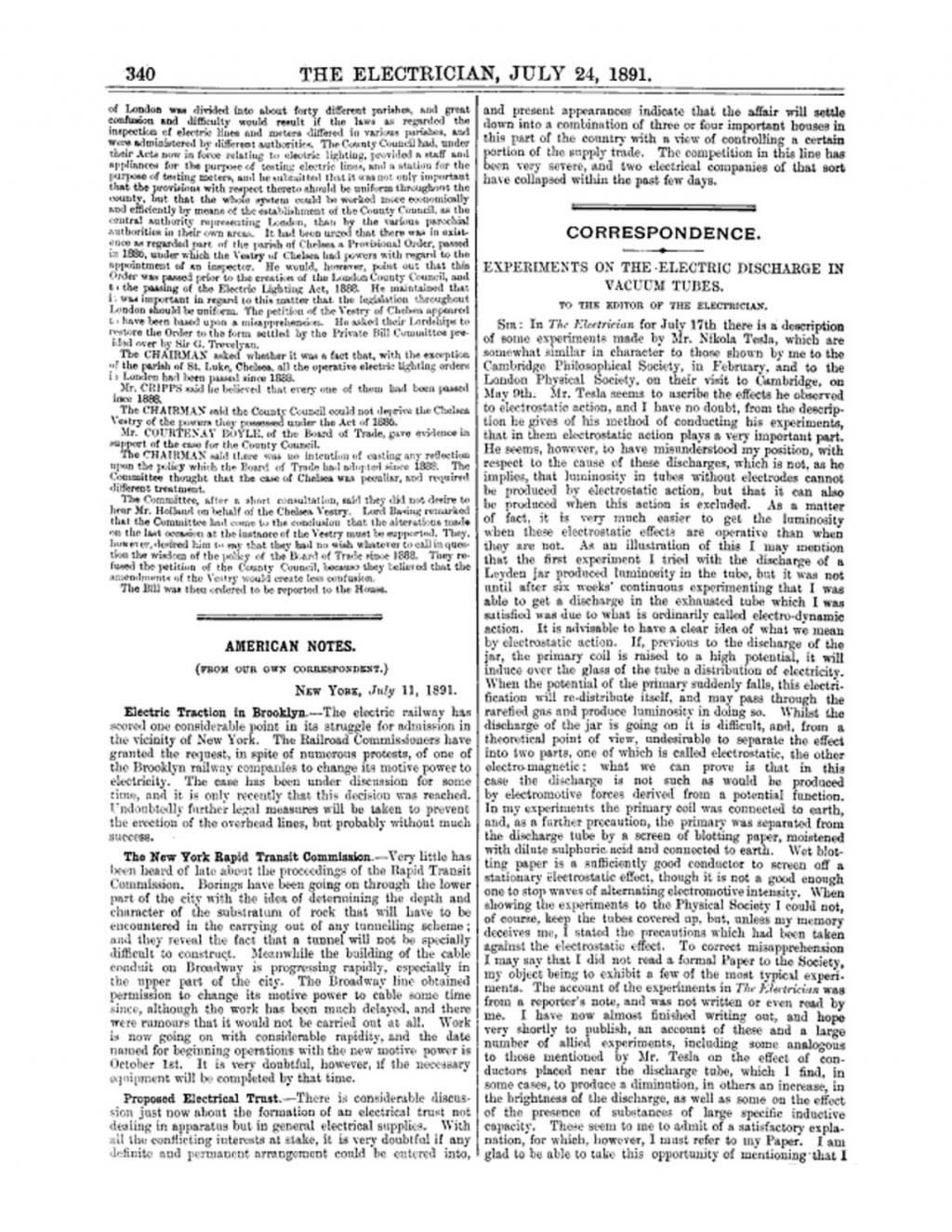