The Cult of the Volt

Inventor Nikola Tesla didn’t get much glory when he was alive, but to hipsters now, he’s a real turn-on.

There’s a scene in the film “Coffee and Cigarettes” where Jack and Meg White, of the band the White Stripes, are discussing the Serbian inventor Nikola Tesla. The two hipsters are slouched at a table in a café, staring moodily at Jack’s homemade Tesla coil, a high-voltage transformer that looks like something from a 1950s sci-fi movie. Talking about the inventor, the usually taciturn Jack becomes animated with enthusiasm for his unsung hero’s accomplishments. Without Tesla, White explains, our world would look and sound radically different: we’d have no radio, no television, no AC electricity, no induction motors, no X-ray technology, no fluorescent lights. Meg nods in agreement, and then adds, “Or the band Tesla.”

Such is the tragicomic legacy of a scientist who was a celebrity in his time but is today overshadowed by his rivals Guglielmo Marconi (often credited with inventing the wireless radio) or Thomas Edison (DC electricity), while being most often linked to an ’80s hair band. Yet to a growing group of artists, writers, musicians and filmmakers, Tesla has become an inspiration. “He thought of invention as an art form, and that appeals to artists,” says Samantha Hunt, author of the new novel “The Invention of Everything Else,” a fictionalized depiction of Tesla’s life. Laurie Anderson’s performance piece “Like a Stream” was inspired by a photograph of Tesla in front of one of his enormous coils. Paul Auster discovered Tesla while writing his novel “Moon Palace” and later said he found the inventor “such a fascinating character, he threatened to throw the book out of whack.” Or, as Douglas Rushkoff, who made Tesla a character in his novel “Ecstasy Club,” says: “If you’re a weird kind of post-psychedelic technologically aware artist type, you gotta know Tesla.”

Tesla immigrated to New York in 1884 and worked briefly with Edison developing an alternating-current motor, but he resigned after the financially shrewd Edison, who championed direct current, refused to pay him. Later, Tesla worked with George Westinghouse on AC energy sources, including fluorescent light bulbs. He filed the first patent for the radio and investigated remote-controlled robotics and wireless communication. Broodingly handsome and dashing, Tesla was, for a while, the toast of New York. He socialized with J. P. Morgan, Mark Twain and John Muir, but over time his ideas became more farfetched, including claims of communication with Mars and a “death ray” particle-beam weapon he thought would end war. By the time he died, in 1943, he was penniless, living in the New Yorker Hotel and tending to a flock of wild pigeons.

The key to Tesla’s appeal is not only his prodigious inventions, but the sad fact that credit for his greatest ideas was usurped by more market-minded rivals. “Tesla was definitely the underdog,” says Hunt, who portrays him as an eccentric who wanders to Bryant Park to talk to Goethe’s statue. Tesla was also an idealist who ripped up a $12 million contract with Westinghouse rather than see his benefactor bankrupted by the expense. This anti-materialistic bent may be what both endears him to artists and has prevented him from getting his due. “He was a horrible capitalist,” Hunt says. “America tends to remember successful capitalists.”

But Tesla’s making a comeback. In addition to the books by Hunt, Auster and Rushkoff, he’s appeared in a Thomas Pynchon novel and been name-checked by Aaron Sorkin. Last year David Bowie played him in the film “The Prestige.” There’s even an electric car, the Tesla Roadster, being developed by Silicon Valley’s Tesla Motors. “We’re probably interested in him now because we’re having much more intimate relationships with technology,” says Rushkoff. “We’re looking for a bit of soul in the machine and Tesla seems to embody that.” Plus, as anyone who knows about him will tell you, Tesla had an electric personality. 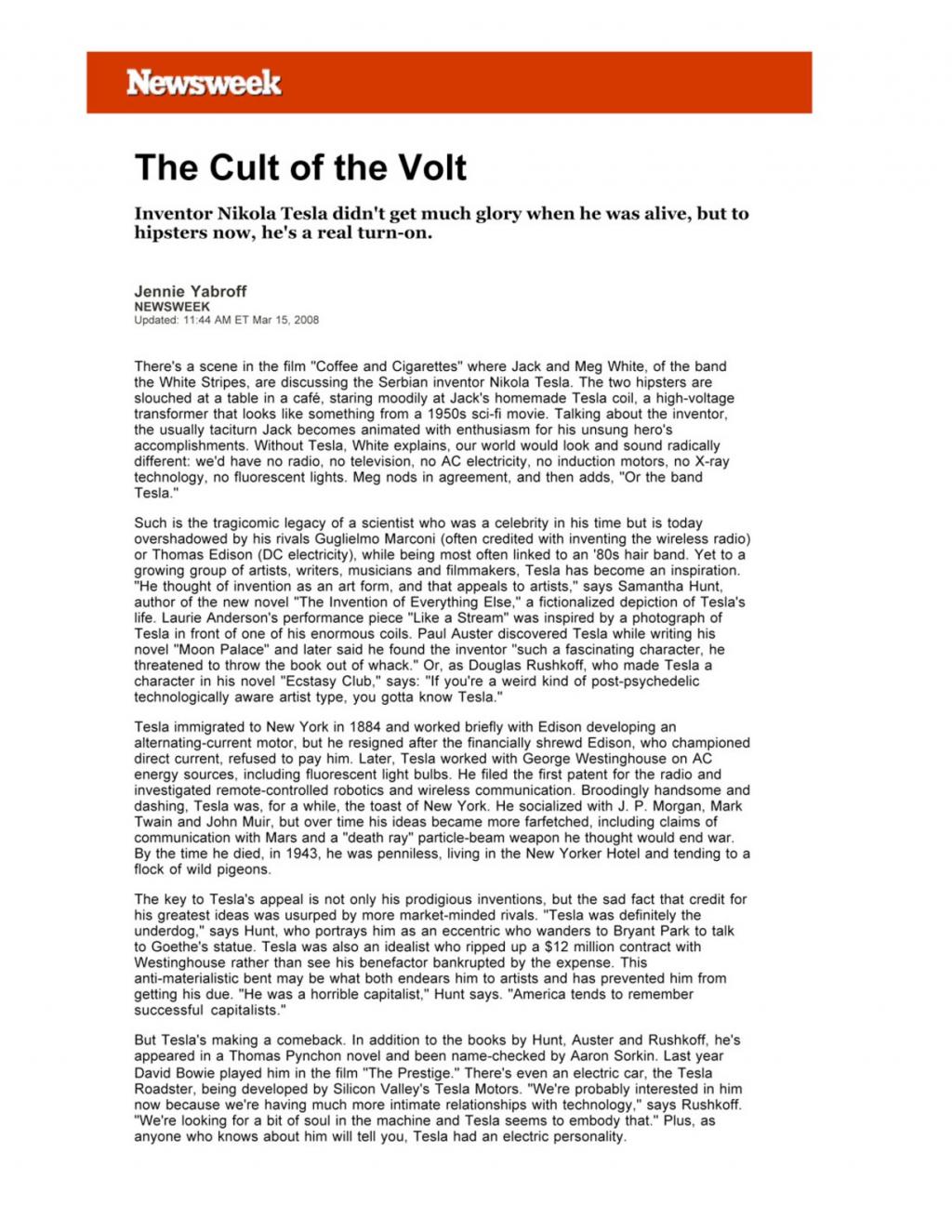