by Mark Singer
New Yorker, The
According to Joseph Kinney, the chief engineer and unofficial archivist of the New Yorker Hotel (an ancillary enterprise not of this magazine but of the Reverend Sun Myung Moon’s Unification Church), three types of inquisitive visitors regularly make pilgrimages there: (1) electrical engineers and technology enthusiasts; (2) people interested in U.F.O.s, anti-gravity airships, death-ray weapons, time travel, and telepathic pigeons; (3) Serbs and Croats. (A guest last year, Bozidar Djelic, the deputy prime minister of Serbia, inscribed for Kinney a copy of his book “Serbia: Things Will Get Better.”)

What these callers have in common is a wish to pay homage to Nikola Tesla, the tragically underappreciated Croatian-born ethnic-Serb immigrant visionary who lived at the hotel, at Thirty-fourth Street and Eighth Avenue, for ten years and, in 1943, died there, at the age of eighty-six. Despite having conceived — but, inconveniently, not necessarily having perfected patents for — dozens of revolutionary devices, Tesla during his lifetime failed to receive proper credit, or royalties, for theoretical work that made possible wireless power transmission and X-rays. It’s generally agreed that Tesla was an earlier inventor of radio than Guglielmo Marconi, who won the patent and a Nobel Prize. At the time of his death, Tesla was nearly destitute, having been bamboozled by, among others, Thomas Edison. He was undone as well by his own impracticality, deficient business acumen, and a predilection toward delusion.

The Tesla saga has provided fodder for an opera, a play, and several biographies. Standing in the lobby the other day, Kinney mentioned that he had been contacted not long ago by a woman named Natasa Drakula (from that family), who was interested in making a film about artists who were inspired by Tesla. Among the most recent is Samantha Hunt, whose novel “The Invention of Everything Else” will be published next month. Its plot, not easily condensed, involves Tesla, a hotel chambermaid named Louisa, her father and his best friend, a semi-functional time machine, a mysterious visitor from the future, and a white pigeon who is the object of Tesla’s most ardent affection. The book’s apposite title is a play upon its epigraph, “Everything that can be invented has been invented” — an 1899 statement attributed to a U.S. patent commissioner (which, if not apocryphal, might rival “Major combat operations in Iraq have ended” as the Least Accurate Remark Ever Uttered by a Senior Government Official).

Among Hunt’s inventions is the transformation of the hotel itself into an endearing character: “The tallest building in New York City when it was built in 1930 . . . forty-three stories high . . . its own power generator, producing enough energy to support thirty-five thousand people . . . kitchen is an entire acre . . . a hospital with its own operating room . . . an indoor ice-skating rink. . . . Each room has its own radio broadcasting on four hotel channels. . . . Twenty desk clerks . . . twenty-three elevator operators . . . a personal secretary for each floor . . . a gentle monster, a sleeping giant. . . . Art-deco designs make the eyeballs pop. . . . Everywhere is the world of tomorrow. Efficiency! Hurry! Chrome and glass!”

As proof, on New Year’s Eve day Kinney and Hunt led a private tour through the hotel’s innards: up to the forty-third floor (where the original exhaust fans and elevator hoists still function); a walk down to forty-one (“Right here was the largest switchboard in the world — or the most telephone operators, anyway,” Kinney said); an elevator ride and hike three levels into the subbasement, where a now sealed subterranean passage, still lined with the original Art Deco tiles, led to Pennsylvania Station. An obligatory stop along the way, naturally, was the thirty-third floor, where Tesla occupied Rooms 3327 and 3328, which the government of Serbia would like to see turned into a museum. For the time being, the space, somewhat reconfigured, still accommodates paying guests. Kinney knocked before using a passkey to open one door, then quickly closed it when he realized that the guest hadn’t yet checked out. He didn’t even try the other, which had a “Do Not Disturb” sign hanging from the knob.

After passing through the laundry facility (where a crew of uniformed women were pressing bed linens with a seventy-five-year-old steam-ironing device) and the machine shop, Kinney proposed a detour to the boiler room. “I don’t know if Tesla came down here, but it’s one of the places he would have considered fun,” he said. “If I go to a hotel, I’d rather see the boiler room than the pool.”

Back upstairs, in Kinney’s office, on the sixth floor, Hunt, who is thirty-six, said, “Until I was twenty-five years old, I’d never heard of Nikola Tesla. And when I first started the novel I really knew nothing about him. Eventually, I encountered the problem of having too much factual information. I didn’t want to lie. I felt, This poor man, he’s been so maligned. I had to leave things out that were true that I thought nobody would believe. The pigeon, which I didn’t leave out, was true.”

Hunt was drawn to Tesla, she said, by the appeal of “looking at the imagined future from the known past.” She added, “I guess it might also enable me to look at what’s happening now and imagine the future. Though part of what I liked about studying Tesla is that I consider myself something of a Luddite. The house I grew up in was built in 1765. Four of my closest friends are in their eighties. My mother never throws anything out, so everything in the house looks as it did forty-five years ago. Actually, I guess I’m not a very future-forward person.” 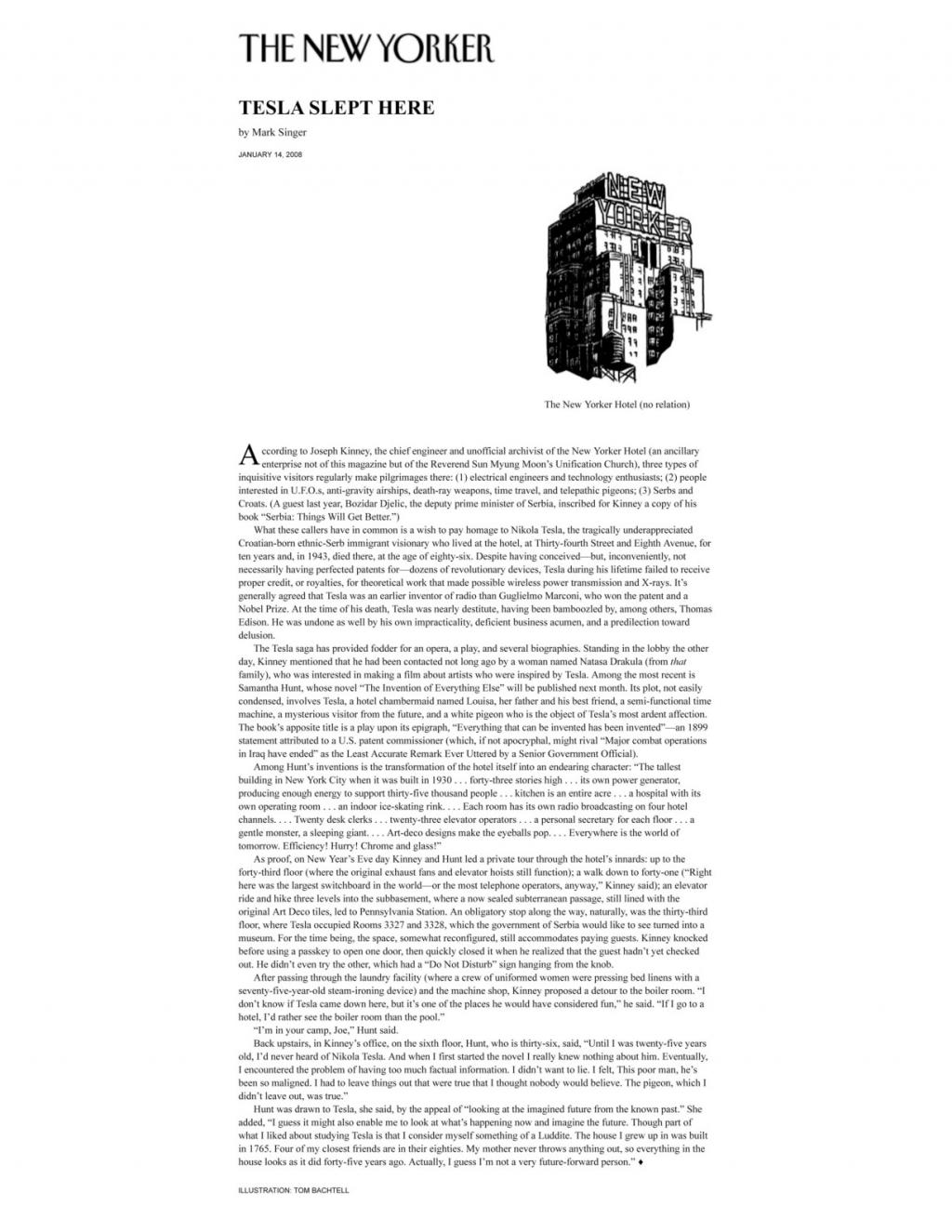