“The Problem of Increasing Human Energy” reads like a scientist's perspective on Ecclesiastes. Whereas “The Prophet” sampled all walks of life and worldly successes only to conclude that all was vanity, and that there would be nothing new under the Sun, Tesla said the same in terms of entropy and a life of experimentation.

Tesla began with the interesting assumption that the bulk of humanity possessed a kinetic energy equal to half the mass of all live persons multiplied not by the square of their motions, but the square of their intellectual virtues. Human energy, then, could be increased as people gained weight or had children, or as they engaged in civilized behavior. To increase mankind's social velocity, according to Tesla, “must ever be the chief task of the man of science.”

In what could be construed to be an unreasonable premise itself, Tesla was convinced that the vector of human energy always pointed in the direction of reason, or “those efforts which, at any time, we designate as ... self-preserving, useful, profitable, or practical.” Nonetheless, working against the second law of thermodynamics is a difficult row to hoe. “This law defines human capacities and human conditions. Were these such that it would be easier to build than to destroy, man would go on unresisted, creating and accumulating without limit. Such conditions are not of this earth.”

He saw ending brutish warfare as key to increasing human energy, while gauging cut-and-run, instant peace strategies to be naive. “War is a negative force, and cannot be turned in a positive direction without passing through the intermediate phases. It is the problem of making a wheel, rotating one way, turn in the opposite direction without slowing it down, stopping it, and speeding it up again the other way?”

Tesla had no doubt about the source of all human energy. It was the Sun. The invention of AC transmission made solar energy stored long ago in coal more readily available to power man's endeavors at distances and thus increase human energy. But Tesla realized that the power source for the future must not be “consumable.” Attempts of others to harness tidal power could never approach the output of simple windmills, but windmills only worked intermittently. Solar power, though a better prospect, also needed a storage system that made it an unlikely candidate to run factories.

So, Tesla explored the feasibility of geothermal energy, but was discouraged to find it required the planting of 12,000-ft shafts. Harnessing differential oceanic temperatures for onboard ship propulsion did not seem worth the effort, either. Lightning was a great source of energy, but too unwieldy. Atmospheric electricity could be harnessed, but again, not in sufficient quantities.

The technology was not available to extend an antenna to heights needed to investigate further. Tesla toyed with maintaining temperature differentials. Any perpetual motion machine was going to require the breaking of some law of physics — like shielding gravity.

Tesla stated that it was this ultimate quest that led to the invention of his oscillators. It also led to his discovery of fluorescent lighting and a method for transmitting wireless signals, and his invention of remote-control telautomatons.

Realizing that the collective consciousness of man had great inertia not unlike bulk matter, Tesla resigned himself to accept that even though he found ways to increase what he termed “human energy,” mankind would be slow to implement his offerings. “The scientific man does not aim at an immediate result. He does not expect that his advanced ideas will be readily taken up. His work is like that of the planter — for the future.” 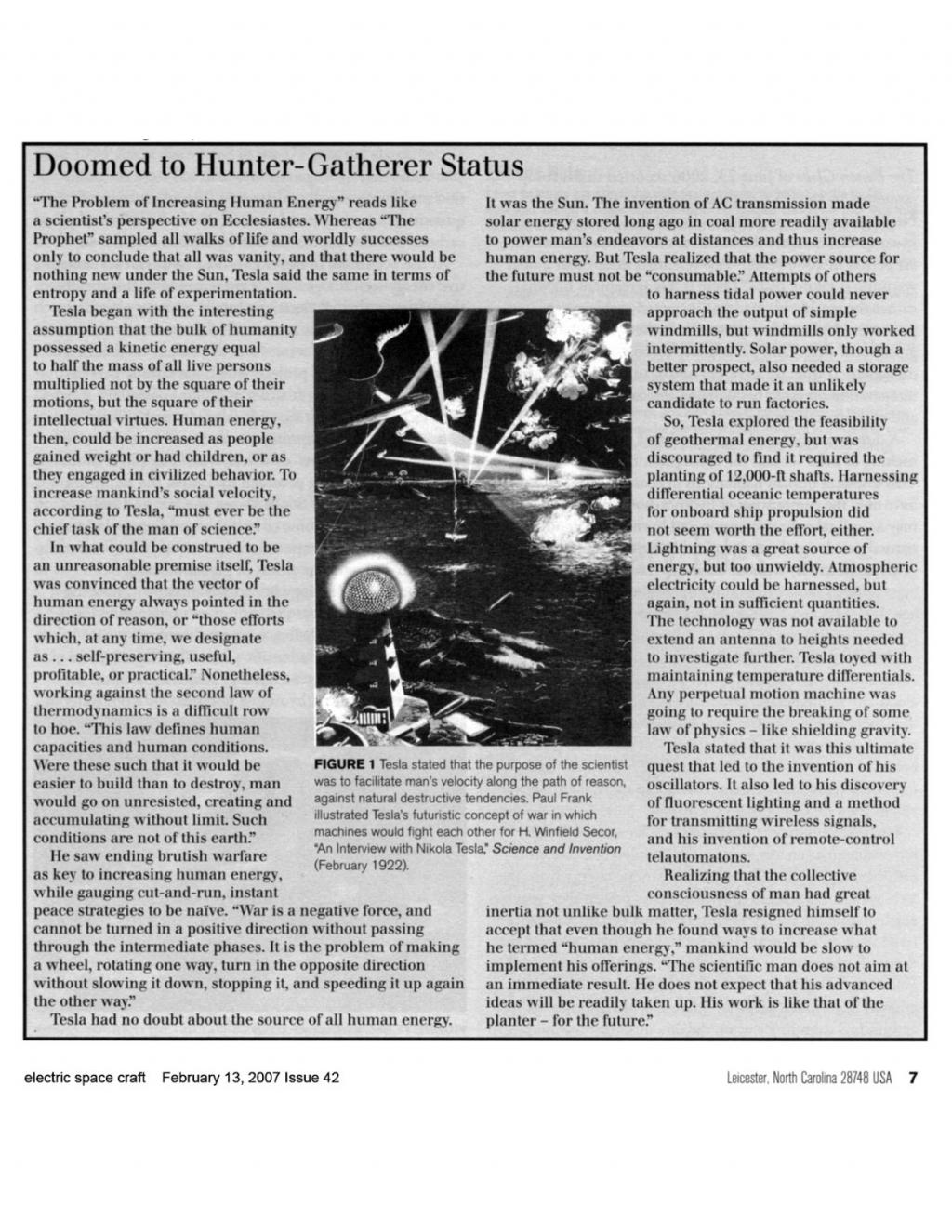