Nikola Tesla, one of the great leaders of electrical development, died on Thursday, January 7, 1943, at 85. He was found by a maid in his suite at the Hotel New Yorker, New York City, having apparently passed away peacefully.

Tesla's greatest achievements were in the realm of alternating currents for power work, and his development of the rotating magnetic field which made possible distribution of power to great distances, as exemplified in the Niagara Falls network.

His dream, however, lay in the realm of higher frequencies, and even before he harnessed himself to more material problems, he dreamed and talked and experimented along the lines of much higher frequencies, those later used in wireless communication. Although one of his earliest statements on this subject put communication first, and transmission of power second on the list of possibilities for high frequencies, later the greater aspect of power occupied his mind almost exclusively, for, as he said some time after, “communication was obvious, whereas power transmission was the more distant goal.” It was for this reason that he experimented for years at Colorado Springs on power transmission without wires, and later built a station, with a mushroom-capped tower, at Waredenclyff, Long Island, for further experiments of a like nature. But after experimenting for over ten years at this latter site, his results were slight only. The first World War put an end to this work, for his tower, so long a picturesque wireless relic, was blown up by the United States Government, due to reports that it might be used for signalling to enemy submarines.

However, his early and clear envisionment of the principles of communication without wires by means of high frequencies, and his even more startling statements of what such “world communication” would bring, makes him indeed a member of the wireless fraternity. In 1904 he described the flashing of news to all points, to be received by a device that might be carried in one's pocket, and even went so far as to describe “impressing American time on the earth,” by means of clocks driven by this radiant energy. Said he: “When this occurs, humanity will be like an ant-heap stirred up with a stick.”

In clear expression of the regret of the VWOA at the passing of one who was a veteran when our Association was first formed, our president sent the following message of condolence:

In Memory of Nikola Tesla

“The Veteran Wireless Operators Association regretfully sends a final message of farewell to that veteran of all veterans, Nikola Tesla. Although he did not attain the practical demonstration of his ideas, in the realm of wireless communication, yet he had a clear understanding of the subject and of the broad way in which it could be brought to use.

“As early as February, 1893, he described a wireless transmitter, in general but nevertheless correct terms, and further stated that ‘a properly adjusted self-induction and capacity device could be set in action by resonance at any point within a certain radius of the source.’ This, he said, would lead to ‘transmitting intelligence, or perhaps power, to any distance through the earth.’

“Here was wireless telegraphy clearly envisioned, and with it tuning ... the first great essential in the art. Thus it is but fitting to place Nikola Tesla's name and his memory in the forefront of the list of those pioneers who foresaw many years ago the inherent principles of the art in which we, in a later time, were likewise pioneers.” 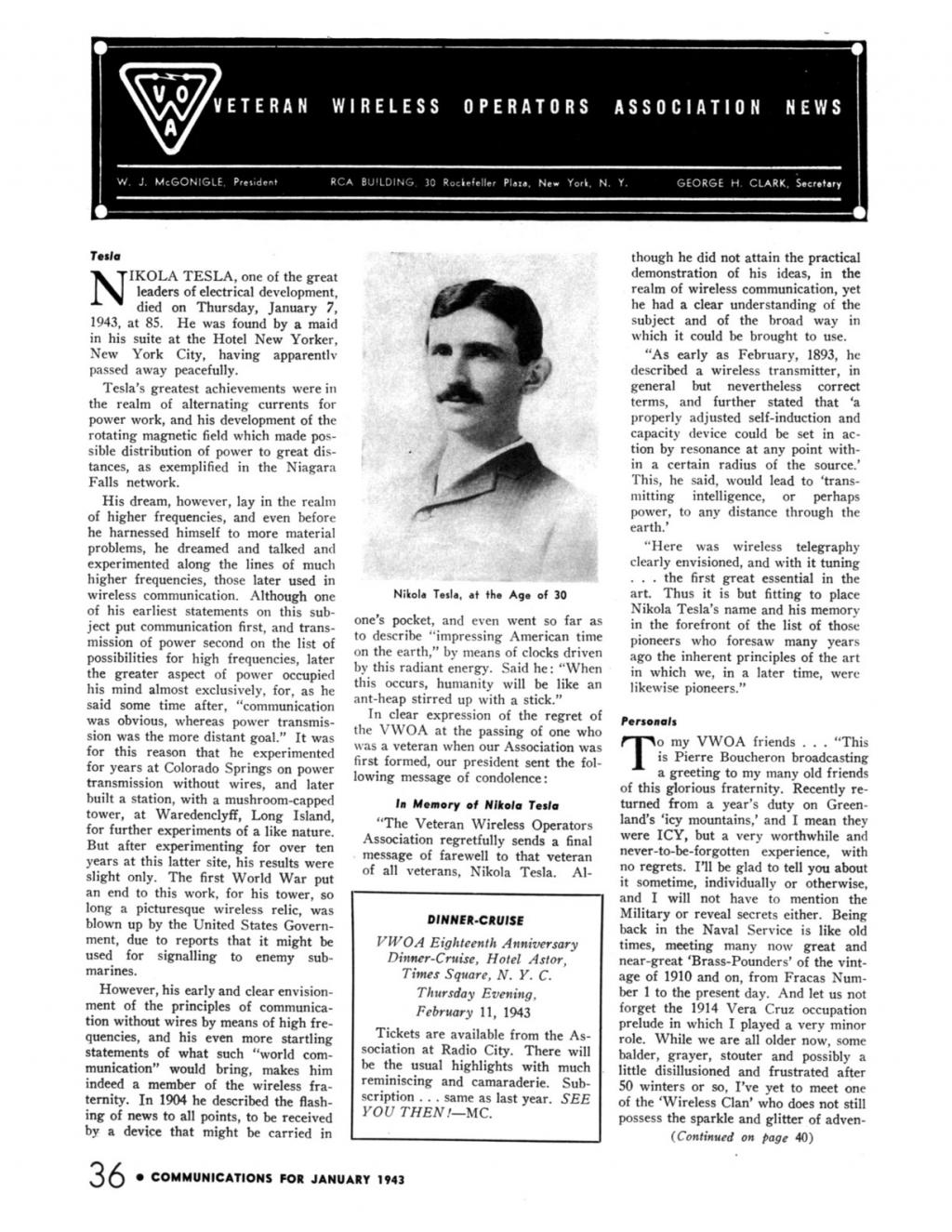