Dr. Nikola Tesla and His Achievements

Perhaps the ever-broadening field of invention has never known a genius more successful in developing far-reaching and original inventions than Dr. Nikola Tesla, whose name is known in every corner of the globe for his scientific achievements.

Dr. Tesla was born in 1857 in Smiljan, Lika, border country of Austria-Hungary, His early education was obtained in the elementary school of his native place. He continued his studies in the public school in Gospic, Lika, and after spending a period of four years in the Lower Real School in Croatia, he graduated in 1873.

His parents originally desired him to study for the clergy, which can be readily understood when one considers that Dr. Tesla’s father was himself a very noted clergyman and orator. However, young Tesla had his mind set on mathematics and physics, and after prevailing upon his parents for permission to study engineering, he entered the Polytechnic School at Gratz, where for four years he studied mathematics, physics and mechanics, after which followed a two year course in philosophic studies at the University of Prague, Bohemia. His practical career started in 1881 in Budapest, Hungary, where he made his first electrical invention, a telephone repeater — and conceived the idea of the rotating magnetic field, which later made him world famous. It may not be amiss to devote a few moments here to the manner in which this prince of savants approached the idea of the rotating field and induction motor.

One day while attending the University, one of the Professors was demonstrating
an experiment with the Gramme armature type of dynamo, when the idea occurred to the young physicist that the sparking at the commutator, which he alone had minutely observed, could be eliminated. The professor immediately denied that this was possible, but with a steady mind and self-conviction, young Tesla determined to work out his ideas, with the result that the modern induction motor was developed, which operates solely from alternating current and requires no commutator of any kind, thus overcoming the nuisance of sparking inherent in former type direct current machines.

Realizing the value of his invention he left for France in an effort to interest some one in his device, but his efforts proved fruitless. At the time he was employed by a prominent European engineering concern, but hearing of the rapid growth of the electrical industry in America, he promptly decided to come to this country, which he did in 1884, and since then has been a naturalized citizen of the United States. To this country he brought with him the various models of the first induction motors, which were eventually shown to George Westinghouse, the great American inventor, and it was in the Westinghouse shops that the induction motor was perfected by Nikola Tesla. Numerous patents were taken out on this phenomenal prime-mover, all of which are under Dr. Tesla’s name, and he was therefore the first person, beyond the shadow of a doubt, to introduce the rotating field principle, in perfecting the induction motor, which is to-day universally used.

Fig. 1 shows the first induction motor, and altho unique in construction, it developed ¼ horse power at 1800 revolutions per minute and weighed but 20 pounds.

Large sums of money were expended by Dr. Tesla to protect his patents on this prime-mover, and he was at the time not permitted to express himself in print or give the history of his invention; thus many erroneous impressions were entertained regarding his inventions. He was far ahead of Ferraris, Schallenberger and many other early, able investigators.

Later another type of machine was brought out by him, in connection with his work in electric power transmission. This one had a field energized by currents of different phase relation (i.e., while one current was at zero amplitude the other would be at maximum, etc.), producing a rotating field in which conductors were employed, and in this way the high frequency current was obtained. This type of machine was subsequently developed by Goldschmidt and is now known under that name, altho Tesla described this principle in a patent dated 1889.

His next work which attracted universal attention was the production of high frequency currents at high potentials. Our readers are no doubt familiar with the tremendous electrical discharges which have been illustrated in several of the previous issues of The Electrical Experimenter. All these experiments were first performed by this genius and never duplicated. One of the first high tension apparatus built by Dr. Tesla is shown In Fig. 2. Incidentally we might mention that this instrument was first used in Europe by Lord Kelvin, the noted English mathematician and scientist, who used it for his lecture demonstrations at the Royal Society. The apparatus consists of a step-up transformer, and a specially built kick-coil, which boosted the secondary transformer voltage to an enormous value. This coil is seen resting horizontally at the back. The terminals of this coil are connected to the large spark gap, which, when the apparatus was excited, was filled with a spark two feet long. The high tension condenser is inclosed within the cabinet. The large coil is used as kick-coil for increasing the voltage. With this device Dr. Tesla was able to obtain a potential of one million volts, which is quite extraordinary with such small apparatus.

Dr. Tesla can rightfully claim priority in employing conical coils for high frequency work, as Fig. 3 shows the first conical coil ever employed for such work, as early as 1892. This coil was excited by means of a powerful transformer. The discharger consisted of a multiple gap, commonly called to-day the quenched gap, which will be noted at the left of the huge coil. An interesting feature of this coil is that a finer wire winding is used at the upper end so as to increase the voltage at that point.

The machine in the foreground is a 50,000 volt direct current dynamo, which was employed in many of his experiments on high potential electricity. In conjunction with the experiments on high voltage direct current, Dr. Tesla developed numerous interrupters for breaking these tremendous currents, the largest one ever built being that shown in Fig. 4. This massive circuit-breaker handled with great ease 50 horse-power of electrical energy at an interruption rate of 100,000 breaks per second. The interrupter consisted of a large chamber in which a circular suction cog was placed, driven at tremendous speed by a motor stationed on top. The rotor or cog operated in a column of mercury in such a manner that each stud of the cog made contact with the pool of mercury, thus making and breaking the electrical circuit. Dr. TesIa employed this interrupter for his wireless researches in 1900.

Dr. Tesla’s most important work at the end of the nineteenth century was his original system of transmission of energy by wireless. In 1900 Tesla obtained his two fundamental patents on the transmission of true wireless energy covering both methods and apparatus and involving the use of four tuned circuits. He also obtained a number of other patents at the same time, describing many other improvements. Among these may be mentioned his application of refrigeration and the oscillatory systems with which he obtained remarkable results in his well-equipt laboratory on Houston Street, New York City.

In 1901 and 1902 several patents were granted to him describing a number of improvements, among which two have assumed great importance in the radio art; one of these is known under the name of the “tone wheel” and the other the “tikker.” Others are making claim to these inventions, but Tesla was far ahead of any of them.

At a little later date Tesla secured two patents on what he termed the principal of individualization, involving the use of more than one oscillation for the operation of the receiver. This property is now known under the commercial name of beat receptors. In long protracted interference proceedings carried on in 1903, however, Tesla has been accorded full and undisputed priority over Fessenden and other claimants. His first beat receiver is shown in Fig. 5, which consisted of a steel band stretched above a powerful electro-magnet excited by a high frequency current, causing the steel band to vibrate at an enormous rate. A small sensitive electro-magnet is placed in proximity to the band, in which is produced an alternating e.m.f., and this is acted upon by the received wave.

The apparatus is timed by adjusting the periodicity of the band until the received wave is made audible. The large electromagnet was usually excited by means of an alternating current generator, and this is illustrated in Fig. 6. Like all Tesla inventions, the construction of this oscillator is very unique, consisting of two chambers in the center of which is placed a vibrating membrane. This is inclosed in a magnetic field, consisting of a powerful coil encircling the device as seen and which was excited by a direct current. The membrane was caused to vibrate by passing interrupted, comprest air thru the two chambers by the inlet pipes as indicated. In the process of vibration, an e.m.f. is produced in a coil secured to the vibrating disc.

A patent was granted to Dr. Tesla in 1914 on an improvement of far-reaching importance in wireless work. The application was filed in 1902. It describes a new form of transmitter with which, according to Tesla’s statement, an unlimited quantity of energy can be transmitted from a small and compact plant. This transmitter possesses the wonderful feature whereby static — the one nuisance of the radio art, and any other interference can be completely eliminated, because of the speed with which the receivers can be operated; it being possible to throw them in and out of tune by a variation of not more than one thousandth of one per cent of the wave length. He has also evolved a static preventer which has been successfuly tested several years ago. He is at present engaged in preparing these instruments for the market.

This great scholar and phllosopher has not devoted his time to electrical devices alone, but recently turned his attention to a new form of prime·mover, which will develop more power than any other motor or engine, and he has stated that it is within the limits of practicability to develop 20 horse-power for each pound of engine weight. The Tesla turbine is shown in Fig. 7. It consists simply of a number of flat steel discs properly balanced. At the lower end of the case an inlet is situated thru which steam or comprest air is forced at a pressure of 100 to 200 pounds per square inch. The steam does not exert pressure against the rotor blades sidewise as in other types, but shoots thru between the blades edgewise. The velocity of the moving steam jet and the peculiar frictional effect resulting is sufficient to rotate the turbine spindle and blades at high speed and with unprecedented torsion or turning effort in foot-pounds. This machine herewith illustrated develops 200 horse-power, and there is no reason why such a machine could not be employed for drawing automobiles, aeroplanes and other vehicles, due to its marvelous simplicity and extreme lightness of construction.

It is further understood that he is perfecting a turbo-driven generator for high frequency currents to be used chiefly in radio-telephonic work. It wilt be very small, compact and entirely reliable, and will no doubt revolutionize wireless telephony.

This master magician of modern electrical science has spent a fabulous amount of time and money in perfecting his inventions, and we are bound to await with great expectancy the next great stride in scientific development which will mark another epochal invention of Dr. Nikola Tesla. 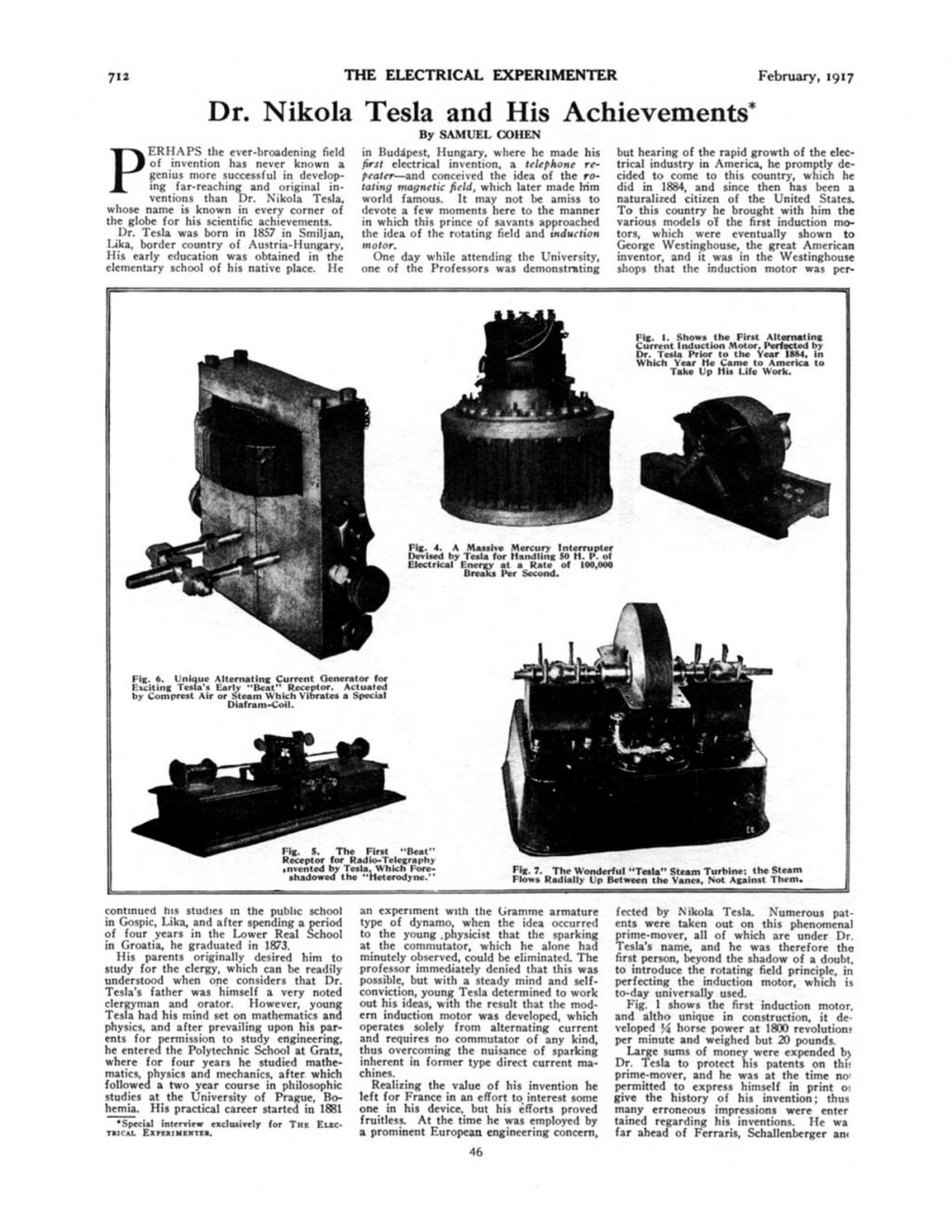