Dr. Tesla Visions the End of Aircraft in War

The drift of the days went on. Troop trains pulled out of the stations, from Centreville, Mississippi, up to Bangor, Maine. The drums throbbed and the trumpets blew. The ships sailed and the casualty lists came back. One by one, the gold stars replaced the white—

Dr. Nikola Tesla was in his laboratory trying hard to solve a problem of ages. Once in a while he raised his head to listen. Then he turned back to his experiments. He was going to end war!

The noted inventor, 78 years old now, already had 700 inventions to his credit. This was to be his greatest.

Years marched on. The fanfare and the drums were done. The dead were buried. The living came home.

Now, 15 years after the war has ended, Tesla, one of the greatest inventors of all time, has announced that his invention to end all wars, by a perfect means of defense which any nation can employ, is ready. Soon, he says, he will take it to Geneva to present it to the Peace Conference.

Whether it is a dream or reality may soon be known. He claims to have created a new agent, silent and invisible, which kills without trace and yet pierces the thickest armor. It is a beam of death and destruction formed of minute particles of matter carrying such tremendous energy that they could bring down a fleet of 10,000 attacking planes and wipe out an army of millions at a distance of 250 miles.

“The invention,” says Dr. Tesla, “will make war impossible for it will surround any country using this means with an impenetrable, invisible wall of protection. Plants for the generating of this beam will be erected along the coasts and near cities. One plant will afford perfect safety within an area of 40,000 square miles.

“The beam will be effective at any distance at which the object to be destroyed can be perceived through a telescope. Every country will have to adopt this invention, for without it a nation will be helpless.

“The beam, intended chiefly for defense, will be projected from an electric power plant, ready to be put in action at the first sign of danger. The cost of operation will be insignificant, as the plant is chiefly intended for use in emergency. But to make the investment profitable in times of peace it may be commercially employed for a number of purposes.”

Dr. Tesla wishes it to be understood that the means he has perfected has nothing in common with the so-called “death ray.”

“It is impossible to develop such a ray. I worked on that idea for many years,” he says, “before my ignorance was dispelled and I became convinced that it could not be realized. This new beam of mine consists of minute bullets moving at a terrific speed, and any amount of power desired can be transmitted by them. The whole plant is just a gun, but one which is incomparably superior to the present.

The picture of the protected world, in which men will devote their time to pursuits of peace, is a strangely fascinating one.

Imagine the map of the world, every country surrounded by great plants which will offer absolute protection to the nation itself and instant death to any intruders. Only ships flying white flags of peace can sail into a foreign harbor.

The power plants, resembling forts placed at strategic distances along a country’s border, will be on guard. As they are immovable, they will constitute essentially means for defense, and by making invasion impossible will greatly advance the cause of peace.

If, occasionally, nations decide that they must have war just for the thrill of a throbbing drum and a singing bugle, it can be staged on the sea, Dr. Tesla says, Navy supremacy will banish aircraft.

“The airplane will cease to be used as a means of offense,” the great inventor explains. “It will be used entirely for peace, as it should be. An airplane, through the very nature of its construction, can not carry with it a generating plant for the beam. If it comes in contact with a country which is protected, it has no chance.

“The battleships will ride to sea safe from air raids, for they will be equipped with smaller plants for generating a beam of sufficient power to destroy any attacking airplane. But they will not be permitted to come near the shore of a protected country and attack it with any chance of success.

“The nation which has the best equipped battleships, however, will gain the supremacy of the seas. Submarines will be obsolete, for the methods of detecting them will be perfected to such a degree that there will be no longer any advantage in submerging. When a submarine is located the beams will function under water, though not quite so effectively as in air.”

Four new inventions of Dr. Tesla are involved in the creation of the beam.

“Briefly, the first comprises a method and apparatus for producing rays and other manifestations of energy in free air, eliminating the high vacuum heretofore indispensable,” he explains.

“The second one is the process for producing electrical force of immense power.

“The third method amplifies the process, and the fourth produces a tremendous electrical repelling force.”

In times of peace such a plant can be used to transmit power in any amount up to its full capacity and to any place on the earth visible through a telescope, according to its inventor. Voltages never before attained, of 50,000,000 volts or more, will have to be applied.

The man who is responsible for so many discoveries and improvements has devoted his entire life to his scientific pursuits. Tall, lean, reserved, his path goes between the two small laboratories and the various manufacturing plants with which he has contact.

Born in Yugoslavia, Tesla comes from a race of inventors.

“On my mother’s side, for three generations, almost all members of the families were inventors,” he says. “My mother was Georgianna Mandic, who was noted as an inventor of household appliances. One of the things which she perfected was her own weaving machine.

“Her family can be traced back to the seventh century, in the historical records. My grandfather was an officer in Napoleon’s army.”

Tesla began to invent at the age of six. As he grew up his interest focused in the laboratory.

“I sleep about one and one-half hours a night,” the inventor says. “I think that is enough for any man. When I was young I needed more sleep. But age doesn’t require so much. There are so many things to do I do not want to spend time sleeping needlessly. In my family all were poor sleepers. Time spent in sleep is lost time, we always felt.”

His diet is simple. He lives chiefly on vegetables, cereals and milk. The menu includes onions, spinach, celery, carrots, lettuce, with potatoes occasionally. Whites of eggs and milk complete the diet. There is no meat on his vegetable plate. He never smokes or tastes tea, coffee, alcoholic beverages or any other stimulant.

While he is perfecting the beam which will defend nations from attack, the inventor is playing with other ideas. He goes from one to the other, he says, as this or that gains paramount interest or some new clew is suggested.

“But what is giving me more fun than anything I have done for a long, long time,” Dr. Tesla explains, “is an electric bath which I hope to have ready for general use very soon.

“It doesn’t require much room. There is a platform on which the person stands. He turns on the current. Instantly all foreign material such as dust, dandruff, scales on the skin and microbes is thrown off from the body. The nerves, too, are exhilarated and strengthened. The ‘bath’ is excellent for medical as well as for cleaning purposes.”

However, the war picture gives the master inventor more satisfaction than the minor inventions. He is rejoicing because his instrument of death will save millions of lives and inestimable property.

His only regret is that there may be another war before the discoveries he has made have been placed before the Disarmament Conference at Geneva, and generally adopted by the nations of the world.

“The next war, and I am afraid that there will be one before long,” he says, “will be fought in the air. But if the beam is adopted war in the air will cease.

“Whatever battles there are thereafter will be confined to the sea. But no nation will dare to attack another nation when every country is armed. There will be a general feeling of safety throughout the world.” 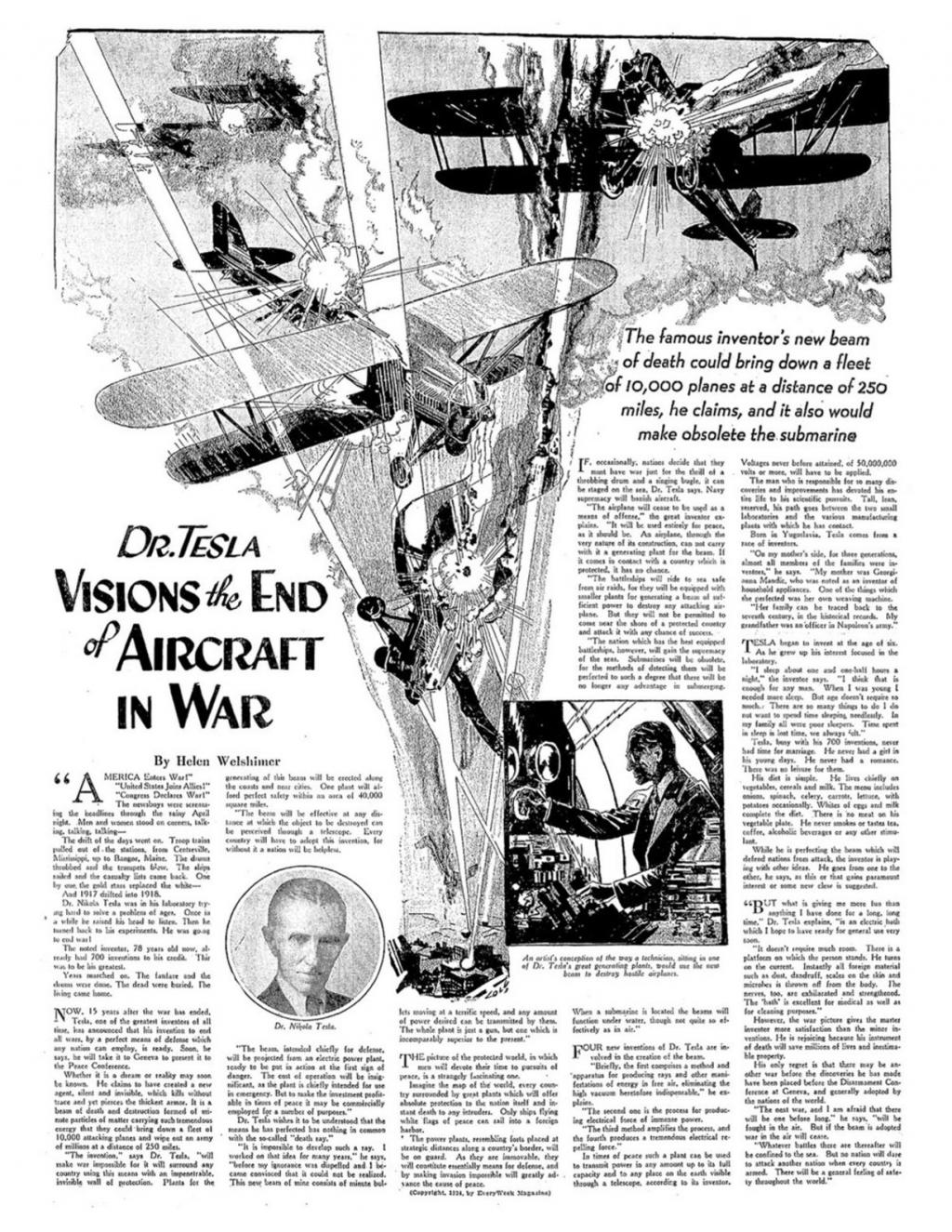