In view of the great interest which is being taken in the articles published by the Manufacturers’ Record and some of the magazines on the development of new power-producers, through the internal-combustion engine, for use for transportation purposes both by land and sea, the following signed statement, made by Mr. Nikola Tesla after a discussion of a new type of auto-bus designed by Mr. Charles A. Lieb, mechanical engineer of the Manhattan Transit Co., will doubtless be read with much general interest:

"Dear Sir — Replying to your inquiry of yesterday, the application of electricity to the propulsion of automobiles is certainly a rational idea. I am glad to know that Mr. Lieb has undertaken to put it into practice. His long experience with the General Electric Co. and other concerns must have excellently fitted him for the task.

"There is no doubt that a highly-successful machine can be produced on these lines. The field is inexhaustible, and this new type of automobile, introducing electricity between the prime mover and the wheels, has, in my opinion, a great future.

"I have myself for many years advocated this principle. Your will find in numerous technical publications statements made by me to this effect. In my article in the Century, June, 1900, I said, in dealing with the subject: ‘Steamers and trains are still being propelled by the direct application of steam power to shafts or axles. A much greater percentage of the heat energy of the fuel could be transformed in motive energy by using, in place of the adopted marine engines and locomotives, dynamos driven by specially designed high-pressure steam or gas engines, by utilizing the electricity generated for the propulsion. Again of 50 to 100 percent, in the effective energy derived from the fuel could be secured in this manner. It is difficult to understand why a fact so plain and obvious is not receiving more attention from engineers.’

"At first glance it may appear that to generate electricity by an engine and then apply the current to turn a wheel, instead of turning it by means of some mechanical connection with the engine, is a complicated and more or less wasteful process. But it is not so; on the contrary, the use of electricity in this manner secures great practical advantages. It is but a question of time when this idea will be extensively applied to railways and also to ocean liners, though in the latter case the conditions are not quite so favorable. How the railroad companies can persist in using the ordinary locomotive is a mystery. By providing an engine generating electricity and operating with the current motors under the cars a train can be propelled with greater speed and more economically. In France this has already been done by Heilman, and although his machinery was not the best, the results he obtained were creditable and encouraging. I have calculated that a notable gain in speed and economy can also be secured in ocean liners, on which the improvement is particularly desirable for many reasons. It is very likely that in the near future oil will be adopted as fuel, and that will make the new method of propulsion all the more commendable. The electric manufacturing companies will scarcely be able to meet this new demand for generators and motors.

"In automobiles practically nothing has been done in this direction, and yet it would seem they offer the greatest opportunities for application of this principle. The question, however, is which motor to employ — the direct-current or my induction motor. The former has certain preferences as regards the starting and regulation, but the commutators and brushes are very objectionable on an automobile. In view of this I would advocate the use of the induction motor as an ideally simple machine which can never get out of order. The conditions are excellent, inasmuch as a very low frequency is practicable and more than three phases can be used. The regulation should offer little difficulty, and once an automobile on this novel plan is produced its advantages will be readily appreciated. 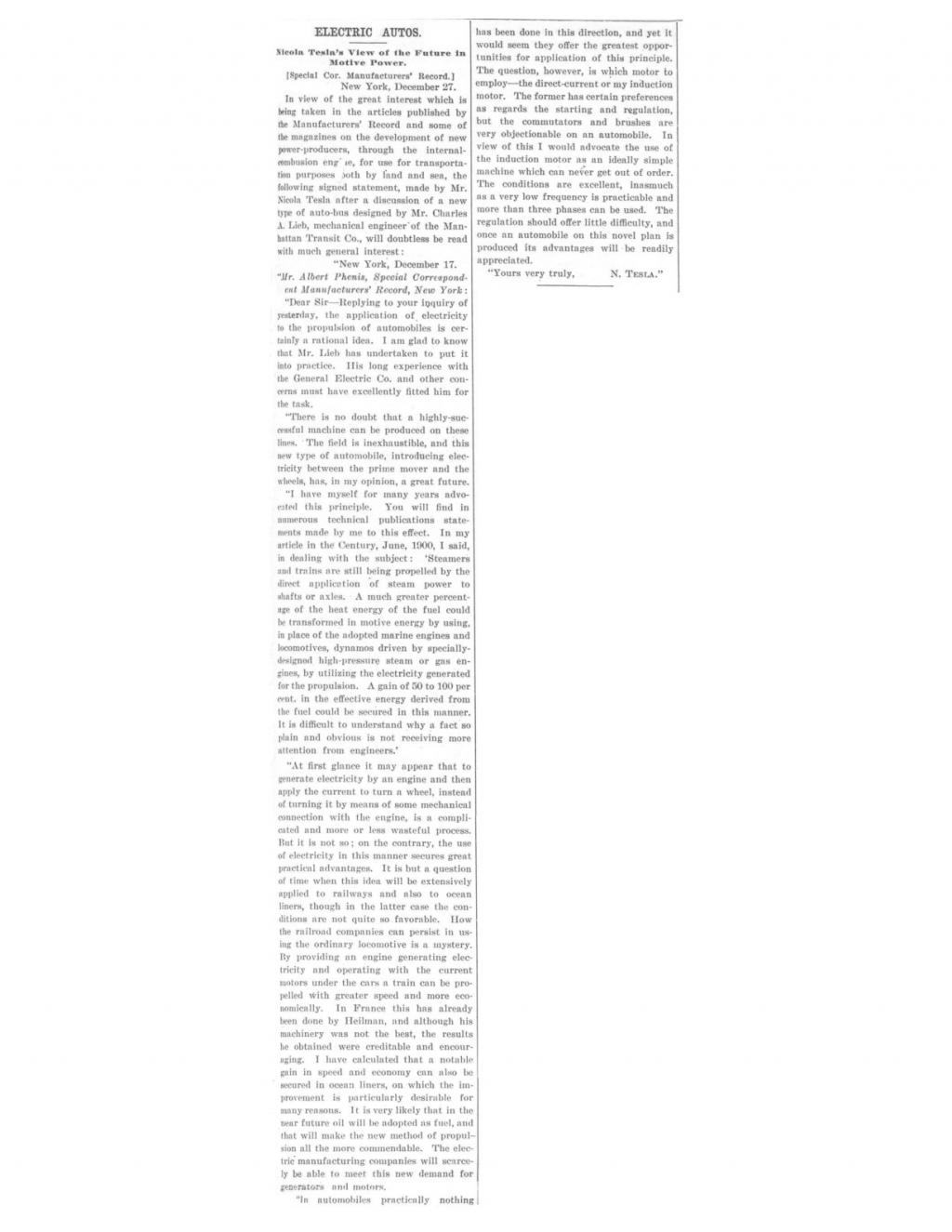