Destruction of the Tesla Laboratory by Fire

By a fire which almost completely gutted the six-story and basement building at 33 and 35 South Fifth avenue, this city, on March 13, Mr. Nikola Tesla, the electrician, lost all of the apparatus with which he has been carrying on his professional experiments. He occupied the entire fourth floor. When the floor gave way his apparatus fell to the second story where it lay in unrecognizable ruin. It was not insured.

Gillis & Qeoghegan, manufacturers of steam fitters’ supplies, occupied the rest of the building. The fire was discovered at 2:30 a. m. John Mahoney, the watchman employed by Gillis & Geoghegan, had, he says, left the office on the ground floor just before that hour to bank the fires in the subcellar, leaving a single gas jet burning. In about ten minutes he returned and found flames running along the floor and up the sides of the partition of the office. Mahoney yelled for a policeman. Policeman Haggerty ran to the watchman’s assistance. Mahoney had closed the office door and was pouring buckets of water on the flames. Seeing that this did no good he told the policeman to turn in an alarm. A moment later he was driven into the street by great tongues of flames which shot up from the floor.

Before Chief Reilly with Engine 33 reached the fire the flames had spread to the first and second floors, and were shooting to the top of the building through the stairways, airshaft and elevator well. From top to bottom the building was saturated with machine oils, used in cutting steam pipe, and this ignited with great rapidity. The firemen fought the flames for fully three hours before they were under control. The Sixth avenue elevated road was blocked in the mean time, the firemen using its structure to work from. It was not until 8 o’clock that the recall for the engines was sounded. The walls and framework of the building were still standing, but the north side of the structure was so badly cracked that the tenants of the nearest houses were ordered out again for fear that it would fall.

Mr. Tesla was at first very much affected by the news of his loss, but sustained the blow stoically, and within 6 hours was busily engaged making and giving out designs for the reconstruction of his latest type of oscillator, which has now been running successfully for some time past, lighting the laboratory and supplying current for a number of new and novel experiments. It is needless to add that Mr. Tesla has received innumerable expressions of sympathy and regret not only from friends and acquaintances but from total strangers. 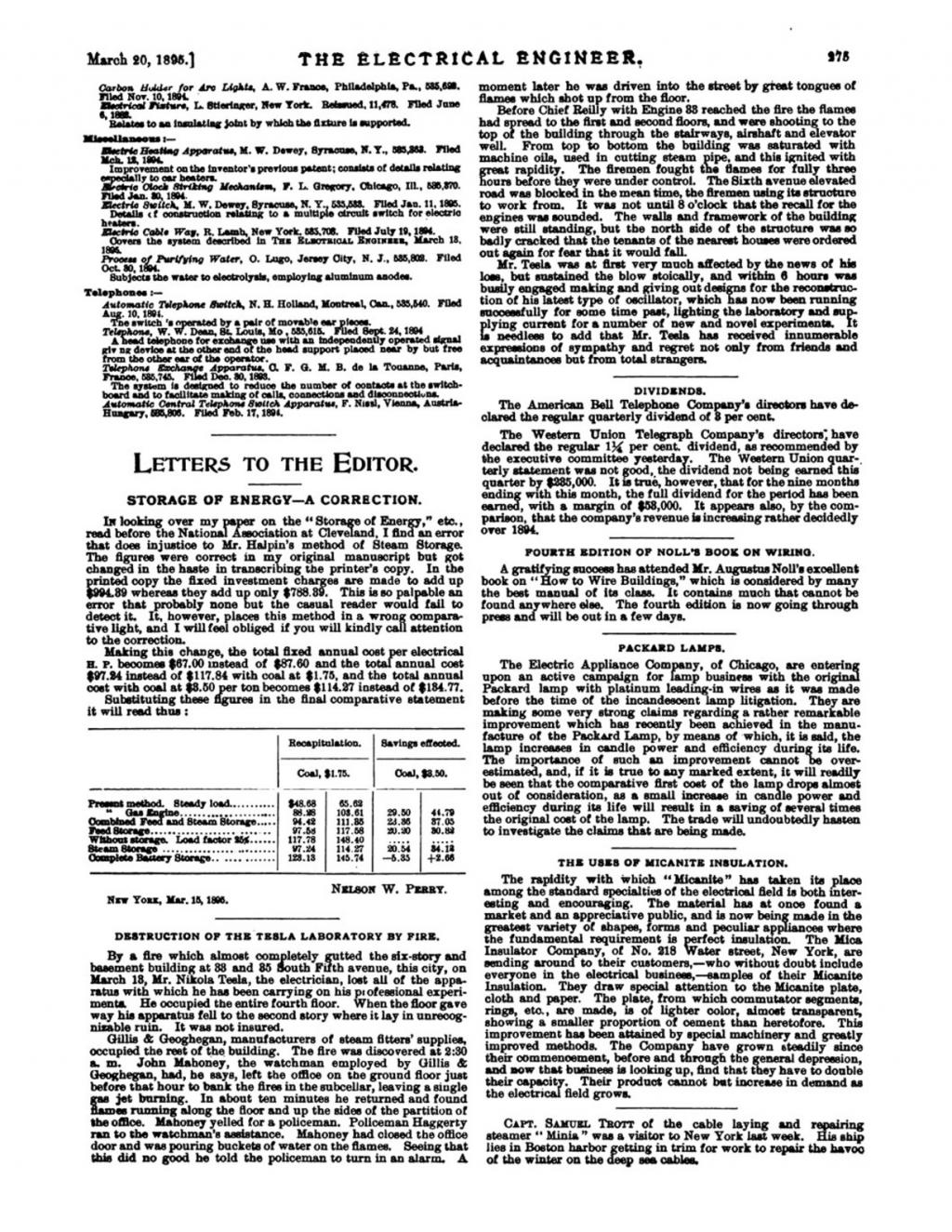