It may come as a shock, to most students of science, to learn that there are still in the world some scientists who believe that there are speeds greater than that of light.

Since the advent of Einstein, most scientists and physicists have taken it for granted that speeds greater than 186,300 miles per second are impossible in the universe. Indeed, one of the principal tenets of the relativity theory is that the mass of a body increases with its speed, and would become infinite at the velocity of light. Hence, a greater velocity is impossible.

Among those who deny that this is true, there is Nikola Tesla, well known for his hundreds of important inventions. The induction motor and the system of distributing alternating current are but a few of his great contributions to modern science. In 1892, he made his historic experiments in Colorado; where he manufactured, for the first time, artificial lightning bolts 100 feet long, and where he was able, by means of high-frequency currents, to light electric lamps at a distance of three miles without the use of any wires whatsoever.

Talking to me about these experiments recently, Dr. Tesla revealed that he had made a number of surprising discoveries in the high-frequency electric field and that, in the course of these experiments, he had become convinced that he propagated frequencies at speeds higher than the speed of light.

In his patent No. 787,412, filed May 16, 1900, Tesla showed that the current of his transmitter passed over the earth’s surface with a speed of 292,830 miles per second, while radio waves proceed with the velocity of light. Tesla holds, however, that our present “radio” waves are not true Hertzian waves, but really sound waves.

He informs me, further, that he knows of speeds several times greater than that of light, and that he has designed apparatus with which be expects to project so-called electrons with a speed equal to twice that of light.

Coming from so eminent a source, the statement should be given due consideration. After all, abstract mathematics is one thing, and actual experimentation is another. Not so many years ago, one of the world’s greatest scientists of the time proved mathematically that it is impossible to fly a heavier-than-air machine. Yet we are flying plenty of airplanes today.

Tesla contradicts a part of the relativity theory emphatically, holding that mass is unalterable; otherwise, energy could be produced from nothing, since the kinetic energy acquired in the fall of a body would be greater than that necessary to lift it at a small velocity.

It is within the bounds of possibility that Einstein’s mathematics of speeds greater than light may be wrong. Tesla has been right many times during the past, and he may be proven right in the future. In any event, the statement that there are speeds faster than light is a tremendous one, and opens up entirely new vistas to science.

While it is believed by many scientists, today, that the force of gravitation is merely another manifestation of electromagnetic waves, there have, as yet, been no proofs of this. There are, of course, many obscure things about gravitation that we have not, as yet, fathomed.

At one time, it was believed by many scientists that the speed of gravitation is instantaneous throughout the universe. This is simply another way of putting it that there are speeds greater than light.

Yet, from a strictly scientific viewpoint, no one today has any idea how fast gravitational waves — always providing that the force is in waves — travel. If the moon, for instance, were to explode at a given moment, how long would it be before the gravitational disturbance would be felt on earth? Would the gravitational impulse or waves travel at the speed of light — that is, 186,000 miles per second — or would the effect be instantaneous? We do not know.

The entire subject will no doubt arouse a tremendous interest in scientific circles. It is hoped that other scientists will be encouraged to investigate Dr. Tesla’s far-reaching assertions; either to definitely prove or to disprove them. 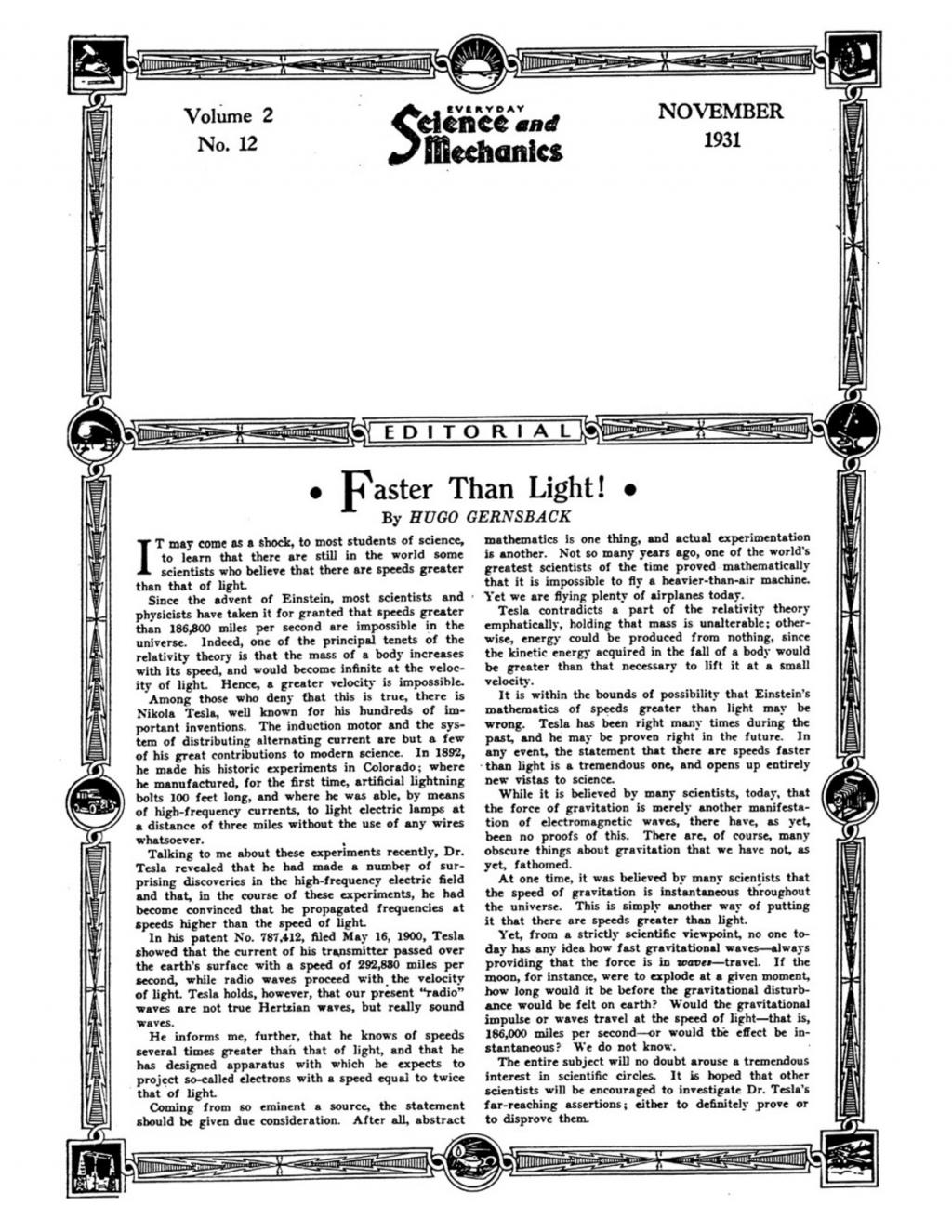