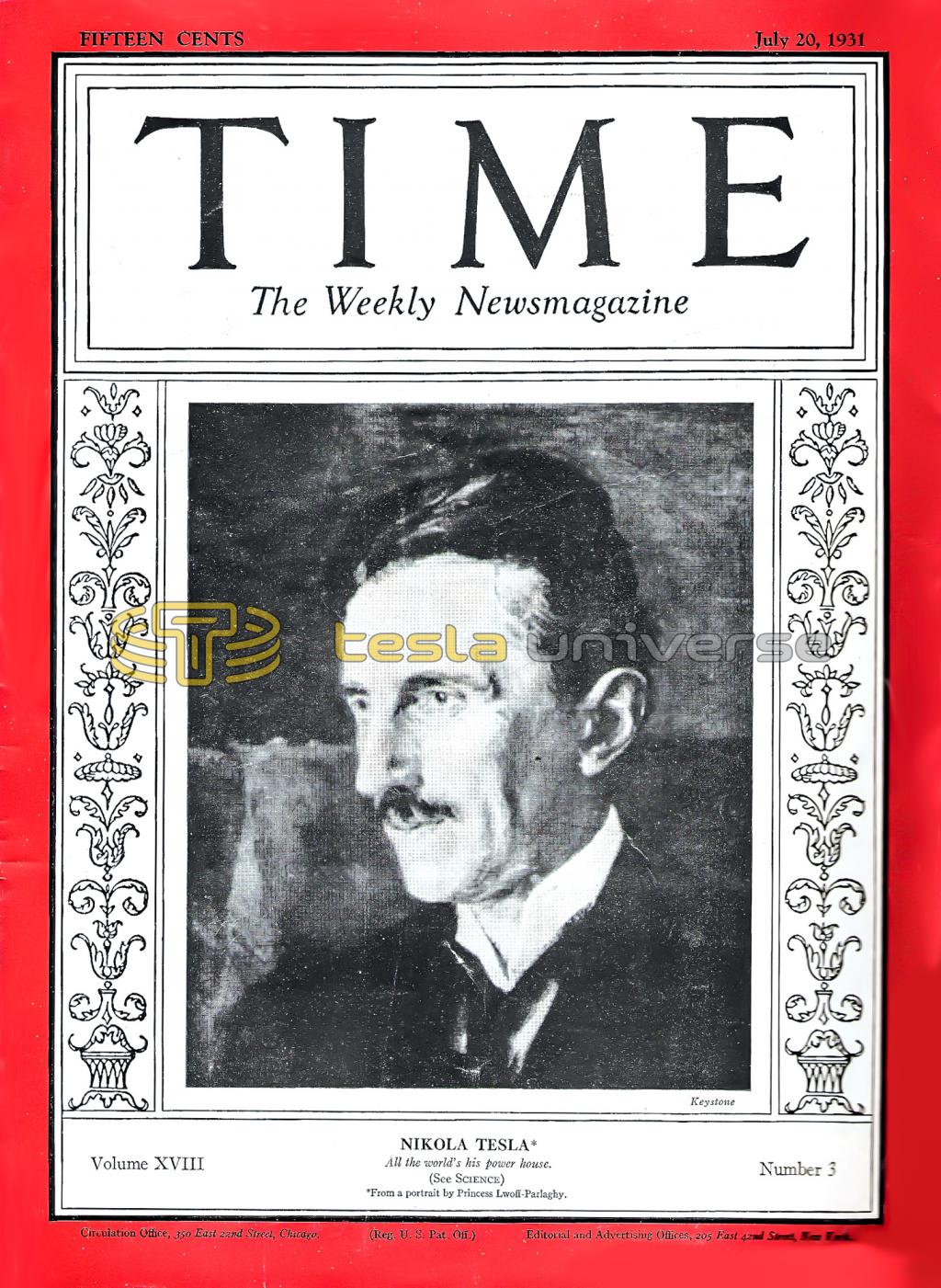 On Nikola Tesla’s birthday in mid-July, the electrical term which his name has become is regenerated as a tall, meagre, eagle-headed man. Reporters hunt him out of his hotel cubicle for his yearly interview and for a day his long-standing fame flares again. People who all their lives have lived by means of the devices he has invented and inspired, people who have forgotten there were an Alessandro Volta, an André Marie Ampère, a Georg Simon Ohm, a Charles Augustin de Coulomb, a Luigi Galvani or a James Watt, are reminded that there still is a Nikola Tesla (pronounced Teshlah) who long ago gave them the Tesla induction motor which made alternating current practical, and the Tesla transformer which steps up oscillating currents to high potentials (15,000,000 volts he avers, with 100,000,000 possible).

Last week was Dr. Tesla’s 75th birthday. Interviewers wished they might see him as he used to be seen in his Colorado laboratory a generation ago, strolling or sitting like a calm Mephistopheles amid blazing, thundering cascades of sparks 30 ft. long, Tesla currents alternating at such prodigious frequency that they would not harm a kitten. But instead they found him, not without some difficulty, in seclusion on the 20th floor of Manhattan’s Hotel Governor Clinton. Pale but healthy, thin to ghostliness but strong and alert as ever, he received his callers in quiet. His hair is slate grey, overhanging eyebrows almost black. His eyes are blue. Only their sparkle and the shrillness of his voice indicate his psychic tension. He wore an ordinary U. S. business suit, a while collar-attached shirt and a commonplace tie.

To Nikola Tesla, all the world’s a power house. For 40 years he has been reasoning, calculating and arguing that the earth has a definite electrical resonance. All that men need do to have unlimited power at their command, and that power without the necessity of transmission wires, would be to generate electricity in tune with the earth’s. The generators might be at waterfalls, coal mines, anywhere. Only possible drawbacks would be the vast expense of installation and the fact that every power house on earth would be obliged to generate the same kind of current, and anyone could tap the current. There could be no financial control of electricity.

Nonetheless the late John Pierpont Morgan believed in the possibility of such wireless power. That was at the time when Mr. Morgan was creating U. S. Steel Corp. and International Mercantile Marine. He was not averse to world control of power and communications. (The House of Morgan is banker for American Telephone & Telegraph, International Telephone & Telegraph, Western Union, United Corp., and many another electrical utility.) Banker Morgan gave Genius Tesla great amounts of money for experiment. In Colorado in 1899, Tesla built a huge induction coil by which he generated and, he says, sent out wireless waves the same year Marconi established wireless communication between France and England. Tesla claims priority, because he conceived his system six years earlier, in 1893. The theoretical path of Tesla’s waves were through the earth, not through the air as Hertzian waves go. On Long Island, Tesla built a steel tower 187 ft. high surmounted by a 68-ft. bossed dome. The tower was to disseminate wireless power. Mr. Morgan died in 1913. Dr. Tesla lacked money. He abandoned the tower, let it be destroyed in 1917.

Since then he has been pondering his theories. His annual interview has been a rehash of the same old subject — Broadcasted Power. But last week he made a “rare occasion” of his 75th birthday and talked about something new.

“I am working now upon two things,” he said. “First, an explanation based upon pure mathematics of certain things which Professor Einstein has also attempted to explain. My conclusions in certain respects differ from and to that extent tend to disprove the Einstein Theory. . . . My explanations of natural phenomena are not so involved as his. They are simpler, and when I am ready to make a full announcement it will be seen that I have proved my conclusions.

“Secondly, I am working to develop a new source of power. When I say a new source, I mean that I have turned for power to a source which no previous scientist has turned, to the best of my knowledge. The conception, the idea when it first burst upon me was a tremendous shock.

“It will throw light on many puzzling phenomena of the cosmos, and may prove also of great industrial value, particularly in creating a new and virtually unlimited market for steel.

“I can only say at this time it will come from an entirely new and unsuspected source, and will be for all practical purposes constant day and night, and at all times of the year. The apparatus for capturing the energy and transforming it will partake both of mechanical and electrical features, and will be of ideal simplicity.

“At first the cost may be found too high, but this obstacle eventually will be overcome. Moreover, the installment will be, so to speak, indestructible, and will continue to function for any length of time without additional expenditures.

“Let me say that has nothing to do with releasing so-called atomic energy. There is no such energy in the sense usually meant. With my currents, using pressures as high as 15,000,000 volts, the highest ever used, I have split atoms — but no energy was released. I confess that before I made this experiment I was in some fear. I said to my assistants, ‘I do not know what will happen. If the conclusions of certain scientists are right, the release of energy from the splitting of an atom may mean an explosion which would wreck our apparatus and perhaps kill someone. Is that understood?’

“My assistants urged me to perform the experiment and I did so. I shattered atoms again and again. But no appreciable energy was released.”

Badgered to reveal his own secret “source of energy,” Genius Tesla politely evaded all questions, promised a definitive statement “in a few months, or a few years.”

Yet he already has conceived “a means that will make it possible for man to transmit energy in large amounts, thousands of horsepower, from one planet to another, absolutely regardless of distance.

“I think that nothing can be more important than interplanetary communication. It will certainly come some day, and the certitude that there are other human beings in the universe, working, suffering, struggling, like ourselves, will produce a magic effect on mankind and will form the foundation of a universal brotherhood that will last as long as humanity itself.”

“I have been leading a secluded life, one of continuous, concentrated thought and deep meditation. Naturally enough I have accumulated a great number of ideas. The question is whether my physical powers will be adequate to working them out and giving them to the world. . . .”

He received birthday greetings from Sir Oliver Lodge, Ernst Frederik Werner Alexanderson, Lee De Forest, John Hays Hammond Jr., Robert Andrews Millikan, Secretary of Commerce Robert Patterson Lament, Henry Herman Westinghouse, and many another. Their greetings indicate the hope if not the confidence that “in a few months” or “a few years” the flame of Nikola Tesla’s genius will weld one more astounding new device for mankind.

It is improbable that he will ever design such a device on paper, let alone in a machine shop, although before his mind’s eye he may see it in every detail, motion, and defect. He is a great visualizer.

His first invention — before he was six and living at his native Smiljan, a Croatian village, in what is now Jugoslavia* — was something the like of which he had never actually seen. He pictured it curved, pointed at one end, fastened to a string at the other. The child modeled a piece of iron according to his vision and thus had the hook which he needed to catch frogs. Similarly he completely visualized his induction motor, his coils and transformers, all his inventions, before he sketched and constructed them. He has unlimited confidence in his visual inventiveness. He no longer bothers to build, seldom bothers to make notes. He simply reclines and cerebrates.

Years ago he had a laboratory in Houston Street, Manhattan. It burned down. He lacked money and desire to rebuild. He had an apartment in midtown Manhattan, in West 40th Street opposite the Public Library whose engineering room he still occasionally haunts, and near the Engineers Club which he no longer will visit. In that apartment he kept a few terrifying but harmless lightning machines. The swank St. Regis Hotel whither he moved two years ago was no place for such devices. Dr. Tesla contented himself with studying four pet pigeons which nested in his rolltop desk. Maids complained. He moved.

Many such stories about him exist. Once, while walking along icy Fifth Avenue he slipped, threw himself through a flying somersault, landed on his feet, unperturbed kept on walking.

At the Hotel Governor Clinton where he now lives, if someone rings him up on the telephone or knocks at his door and he does not want to answer, he locks himself in the bathroom, turns the water loudly on. He is very sensitive to sensory stimuli. When he gets excited, blinding lights flash through his mind. He retreats to bed. A lifelong bachelor, habitually he goes to bed at 5:30 a. m., rises at 10:30 a. m. But he does not sleep the whole period. Proudly, yet almost plaintively, he explains: “I roll around and work on my problems.”

* His father, a Greek clergyman-orator; his mother, Georgina Mandic, a Serbian inventress of household thingamajigs. “Her fingers were still nimble enough to tie three knots in an eyelash” when she was past 60. Dr. Tesla migrated to the U. S. in 1884 to work for Thomas Alva Edison, whom he soon quit. His naturalization papers he keeps in a safety box, his scientific medals and degrees in old trunks and cupboards. 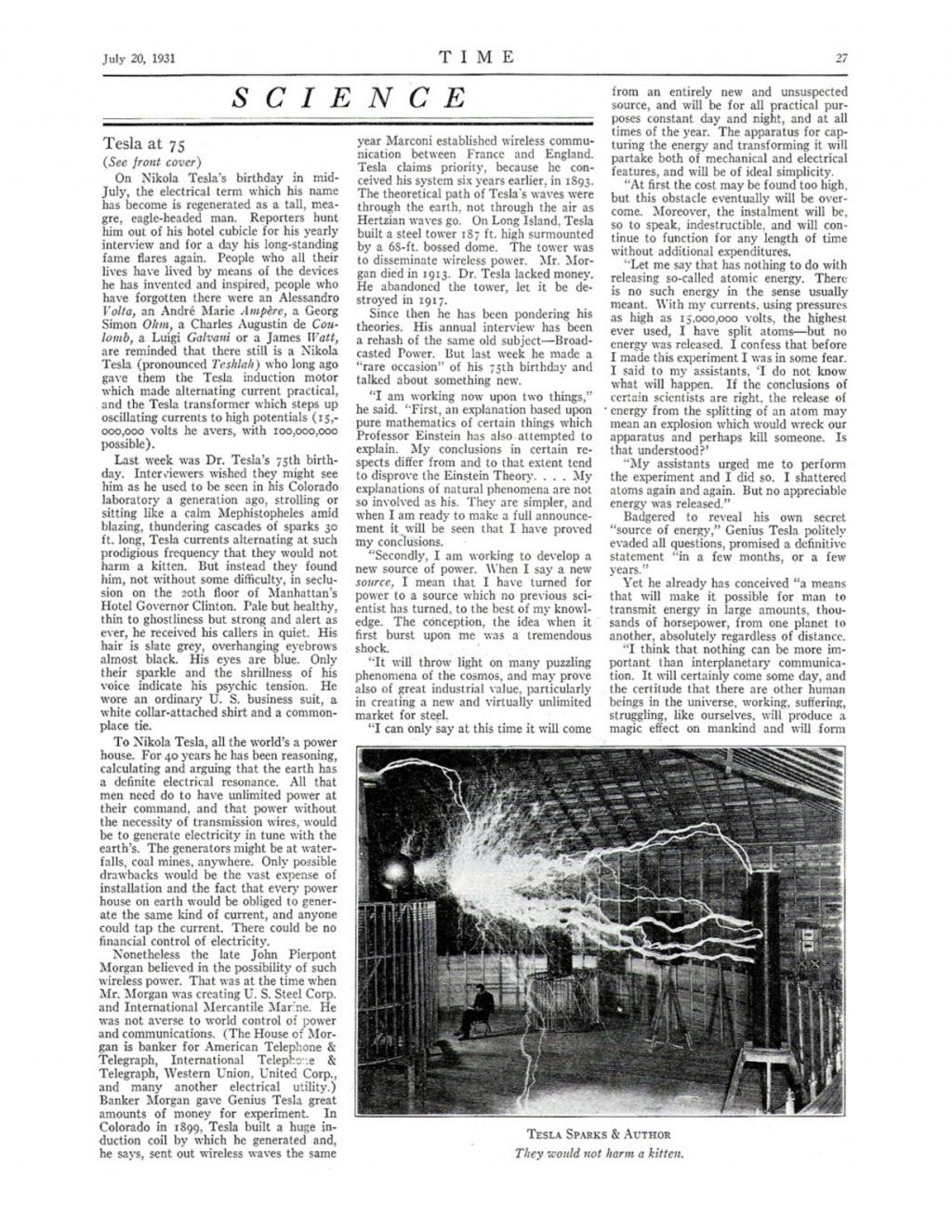