A History of Tesla's Laboratory

Nikola Tesla utilized his extensive scientific background and creative imagination to invent or lay the ground work for a variety of today’s present technologies. His work is credited as the inspiration for radio, robotics, radar, lasers and even the “Star Wars” defense strategy. Tesla’s list of patents was the basis for things such as the Niagara Falls hydroelectric power project, and the automobile speedometer and tachometer. He invented AC electric current, fluorescent and neon lighting, wireless telegraphy, radio tubes, and improved turbine engines to name a few. After emigrating to the United States in 1884, Tesla worked on all of his major projects at various laboratory sites. These included Pittsburgh, PA, New York City, NY, Orange, NJ, Colorado Springs, CO and Shoreham, NY. Unfortunately, there is but one of these laboratory sites left as a testament to the genius of Nikola Tesla. That site is the Shoreham, Long Island location.

Tesla purchased 200 acres on Long Island’s north shore in 1901 from James Warden. These 200 acres were part of an 1,800 acre potato farm along what is today Route 25A. The site became known as Wardenclyffe after the owner. In April, 1901, the Wardenclyffe Post Office was established in the town; in 1906 it became the Village of Shoreham.

The purpose of the laboratory was the establishment of a wireless telegraphy plant. Tesla’s plan had the initial backing of the famous financier J.P. Morgan. The laboratory and transmitter were to be first used for reporting yacht races, communication with ocean steamers and sending messages in Morse code to England. The total 1,800 tract was originally envisioned not only as a laboratory, but a small city, having homes, stores and buildings to house more than 2,500 workers. The prestigious architectural firm of McKin, Mead and White was contracted to design the laboratory and transmitter.

Stanford White is well known on Long Island for having designed many homes of distinction. He became the architect for the building. Tesla’s facility had a tower 187 feet high above ground and a well beneath the tower below ground level 120 feet deep. The red brick laboratory building can be seen on the north side of Route 25A between the intersection of Randall Road and the Shoreham Fire Department.

During the last week of July 1903, residents around the Shoreham site experienced what was to be the only testing of Tesla’s equipment at this facility A thunder-like noise was heard throughout the area. Light displays were seen emanating from the tower on several nights. These were seen as far away as the south shore of Connecticut.

As creative as Nikola Tesla was, he did not master the importance of remaining financially solvent. Several days after these tests, his dream was destroyed when creditors from Westinghouse confiscated his heavier equipment for nonpayment for services rendered. In addition, James Warden sued Tesla for nonpayment of back taxes.

Shoreham residents were rocked once more by a groundshaking event from the Tesla site. The 187-foot tower was destroyed by dynamite explosion as ordered by the U.S. government. It was demolished in 1917 by the Smiley Steel Company as members of the Associated Press and the military supposedly watched the event. Some say the government suspected that the tower was used by German spies to send military messages. Others say the tower was destroyed to be sold for scrap to pay Tesla’s bills.

In 1939 the Peerless Photo Company purchased the property to manufacture emulsions for photographic film and paper. Additional buildings were constructed. In 1969 it became Agfa-Gevaert, Inc., a division of the Bayer Corporation. In 1987 manufacturing ended and the facility was closed down. Since then the entire facility has remained dormant. Of interest is the fact that the laboratory building was the first to be listed on the Town of Brookhaven registry of historic sites in 1967. 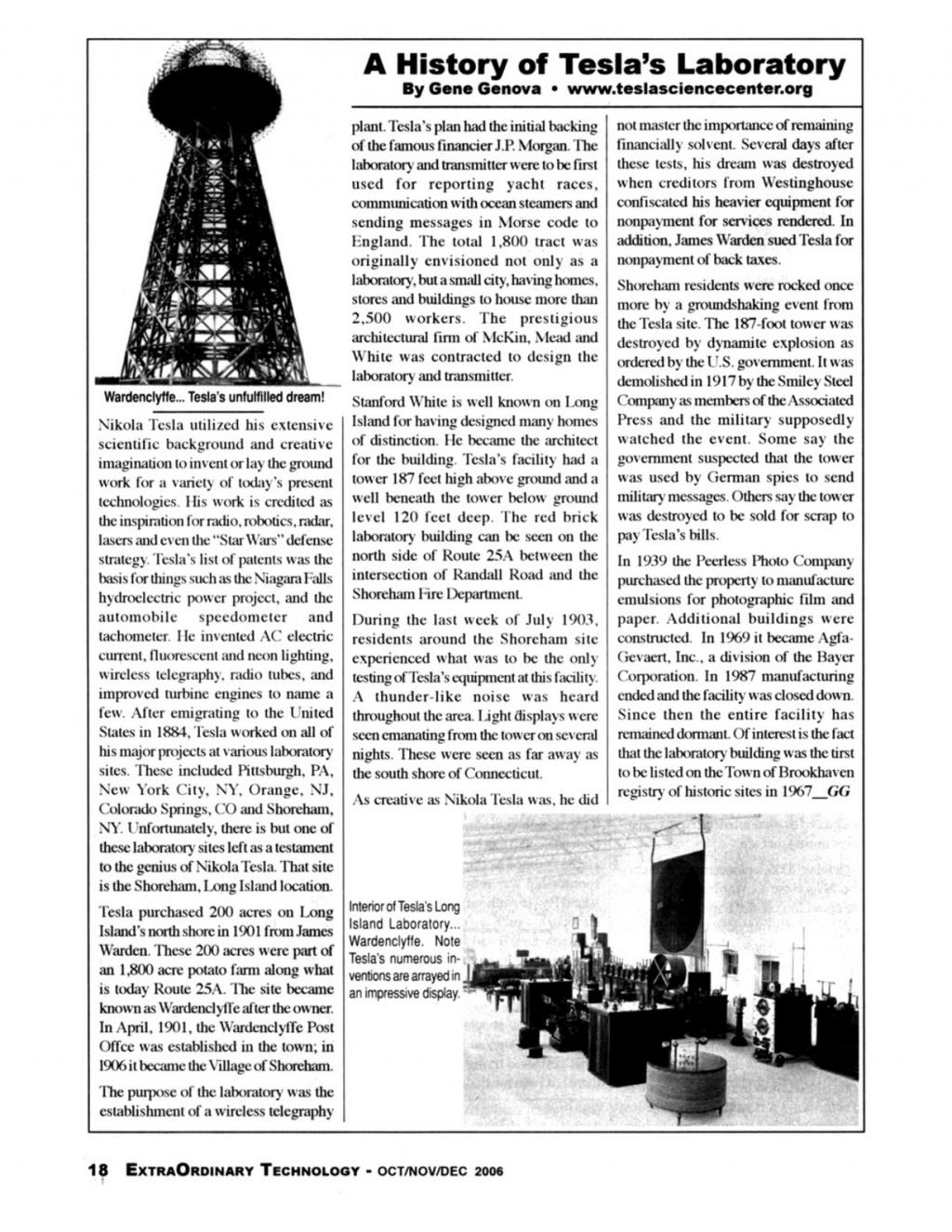