If The Air Should Burn Up

A STARTLING AND INCENDIARY POSSIBILITY, SUGGESTED BY MR. TESLA.

In a paper which Mr. Tesla recently contributed to the pages of “The Electrical Review” he mentioned a striking possibility. He was discussing his own apparatus for raising the potential, or pressure, of an electric current, when it is intended to transmit it through rarefied air from one point to another. He noted, in passing, the increased sensitiveness of atmospheric nitrogen when subjected to the influence of electricity at a high potential. That is to say, a gas which is ordinarily rather sluggish about combining with other chemical elements exhibits a more sociable disposition when a powerful current is passing through it.

This fact led Mr. Tesla to contemplate the contingency of a sudden union between the nitrogen of the air, along the route traversed by a high-pressure current, and the oxygen with which it is mechanically intermingled. Such an operation, it must be noted, would really amount to combustion. When any substance burns — wood, for instance — the inflammable part of it combines chemically with oxygen. A material that is burned is oxidized. Hence a chemical combination of the nitrogen with its principal fellow-constituent of the atmosphere would really be a burning process.

Now, if anything of this sort should ever happen, the combustion would be confined at first to the immediate vicinity of the path of the current. But many things, like a stick of wood or a piece of coal, when once ignited, continue to burn for a considerable period, the fire gradually extending from the place at which it began until the whole object is consumed. In like manner, Mr. Tesla suggested, if the earth's aerial envelope is ever set ablaze at all, it may keep on burning until it is altogether converted into something else. The best-known chemical combinations of oxygen and nitrogen are nitrous or nitric acids, and one or both of these would doubtless result from a conflagration of the kind here indicated. A complete removal of the atmosphere from the earth would put an end to winds, rain and weather in general. But inasmuch as it would also extinguish all animal life, the weather would not be missed.

The fact that lightning is attended with very high potentials, and has been at work in the atmosphere for thousands — probably millions — of years without having produced any result of this kind, so far as scientists know, is somewhat reassuring as to the future; but, after all, it does not absolutely guarantee humanity against the possibility to which Mr. Tesla calls attention. It is doubtful whether the voltages of an ordinary stroke of lightning are as great as those which Mr. Tesla secures with his new transformer. Setting the North River on fire is conceded to be an unattainable bit of incendiarism; but if Mr. Tesla is not cautious he may give the world an infinitely vaster display of fireworks. 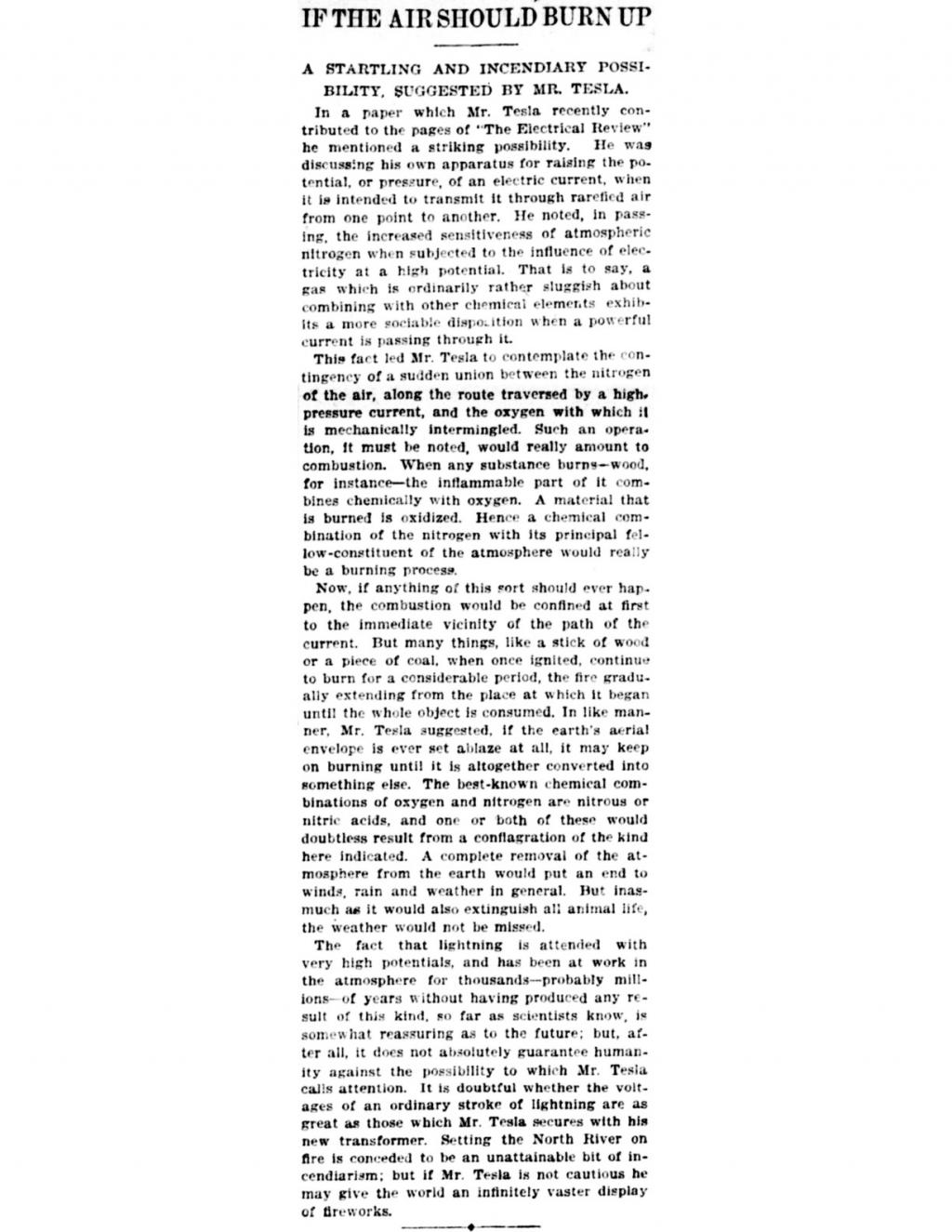