Wireless Around The World

Nothing Novel in the Accomplishment, Says Nikola Tesla

To the Editor of The New York Times:
I read in your issue of to-day that, according to Lieut. Col. Chales, Director of Military Telegraphs of France, a wireless message “should theoretically go around the world.” If you will take the trouble of perusing my French patent, No. 354,791, you will find that this has long since ceased to be a theory, for that document, while bearing the date of April, 1905, describes experiments which I made in the Fall of 1899, and one of which was to pass currents of 100 amperes around the globe, a mere breath in view of its immensity, but more than necessary to affect a sensitive receiver. You will also notice that in those tests I used “undamped” oscillations, one of my earliest improvements, which you seem to find pleasure in attributing to other electricians. These facts are mentioned incidentally, merely with the desire of informing you correctly.

What I wish to bring to your attention relates to certain provisions of the last wireless conference which are now being considered by the United States Senate. Some of the rules were undoubtedly proper and applicable to “radio-telegraphy” by electro-magnetic or Hertzian rays, in view of the impossibility of preventing interference and because many different forms of apparatus were employed. But since that time the Herts waves have been abandoned by the more advanced experts and a uniform system adopted which permits the simultaneous transmission of any desired number of wireless messages without interference and with a precision and accuracy equal to, if not greater, than that practicable with cables. If International rules are to be established, they should be in reasonable harmony with existing conditions. Their consideration might be made the subject of another wireless conference, which it would be proper to hold here, as all the essential principles, processes, and devices have been discovered and perfected in this country.

You will probably agree with me that the contemplated compulsory exchange of messages is a measure not flattering to our enlightened age. We have no law compelling a person to go to the rescue of another in peril, and yet one who would fall to do so would be guilty of a crime insignificant as compared with that of ignoring a call of a vessel in distress. So ignominious a rule should not be permitted to go on record. Besides, the scheme is entirely impracticable. Even if sealed recording and controlling instruments were installed on the vessels, they would be of little use.

The trampling of rights granted to pioneers and attendant throttling of commercial undertakings, offering infinite possibilities, can be but hurtful to progress. As I have stated in a previous letter to THE TIMES, the wireless transmission of energy will ultimately insure the supremacy of the Anglo-Saxons, who are the fittest race to govern. Their interests and the world's peace are in the free and unhampered development of the art. 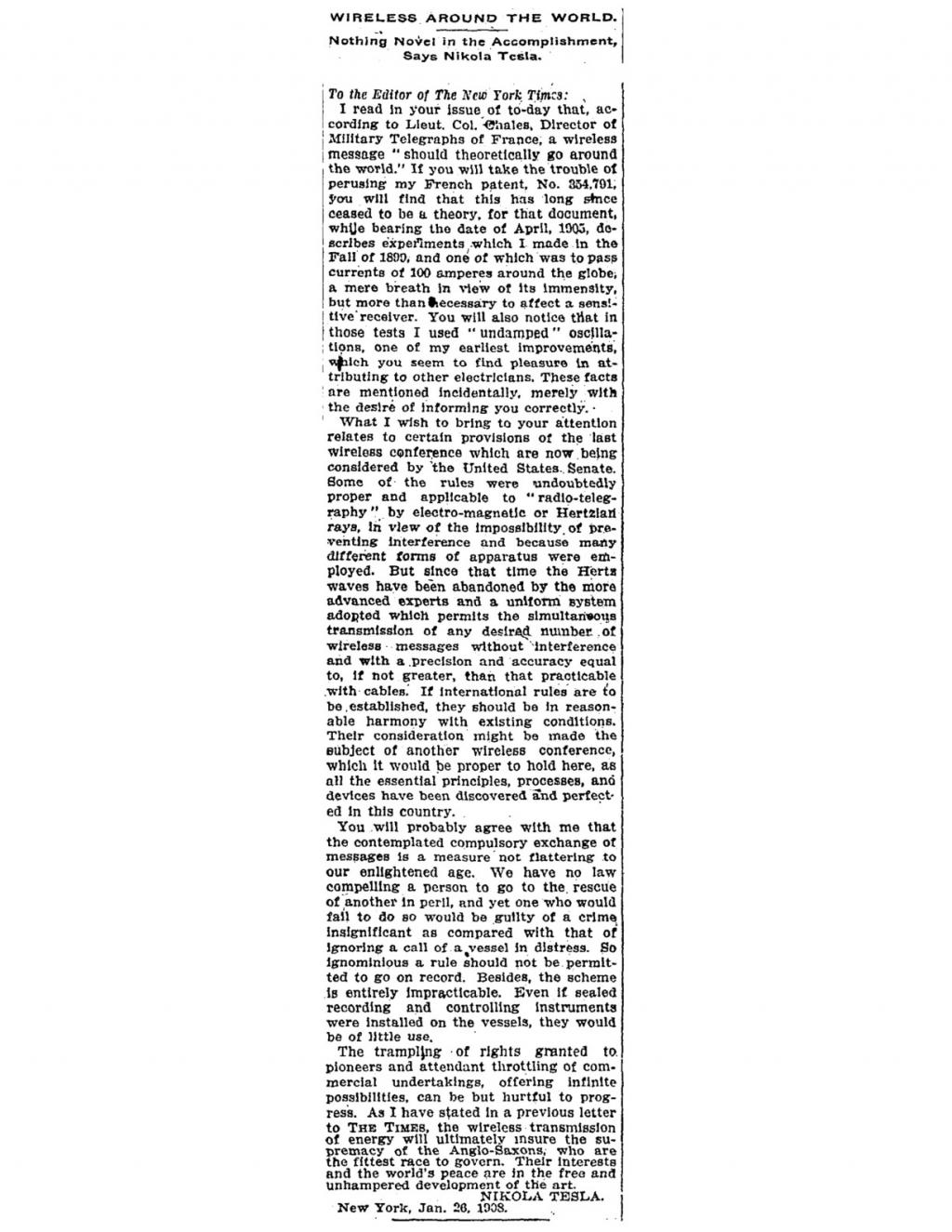