Inside the Black Vault - "The Nikola Tesla Files"

What Do These Pages Talk About That's so Secretive the Government Won't Release Even One Word?

The usual history records that the radical inventor with big ideas caught the brunt of the FBI's attention after death. More than post-mortem machinations are exposed by once again opening The Black Vault.

As we learned in last month's column, the Federal Bureau of Investigation is a government agency that likes to watch people, the formidable Big Brother we've all been warned about. This month, we delve into the story of a person the FBI took great interest in, and compiled a lengthy file on: Nikola Tesla.

Born in Hungary in July 1856, Tesla grew up to attend the Technical University of Graz, Austria, and the University of Prague, where his inventive skills first flourished. Among the many experiments Tesla conducted over the following years, perhaps his most infamous and controversial involved the wireless transmission of electrical power, which some would later refer to as the "Death Ray." The FBI itself called Tesla "one of the world's outstanding scientists in the electrical field," but later claimed their files contained nothing more than inquiries the agency made regarding the whereabouts of Tesla's personal papers after his death in January of 1943.

On the contrary, looking deeper into the FBI Tesla files, we learn they not only consisted of inquiries about the location of his papers. The government also took a huge interest in Tesla's experiments and whom he was giving the information to.

A memo typed on FBI letterhead, dated January 11, 1943, just after Tesla's death, shows that Tesla completed many of his experiments with radio transmissions, one of which involved building and perfecting a revolutionary type of torpedo, a device not in use by any other nation. The memo goes on to warn that this information may fall into enemy hands. Sava Kosanovich, a distant relative of Tesla, in an apparent attempt to sell the secret data, had stolen it from Tesla's apartment. If German U-boat squadrons were to be supplied with this new weapon, it could devastate Allied shipping. After this theft, the FBI made sure that Tesla's "closely-held secrets" were guarded; no person could approach Tesla's property, including his safe-deposit boxes, unless escorted by a Bureau agent.

In a heavily blacked-out document dated March 29,1943, we learn about the theft of Tesla's papers by Sava Kosanovich, which were recovered and later turned over to the Alien Property Custodian. This same document notes that a man named Abe Spanel, the President of the International Latex Corporation, came forward to say he was a fourth cousin to Tesla, the closest relative to Tesla in the United States. Since Tesla had passed away in January, all of his possessions should go to Spanel, who was quoted as saying that Tesla had over 900 patents and inventions and was one of the greatest inventors who ever lived.

According to Spanel, Tesla also tried to get in touch with the War Department (now Department of Defense) in hopes of turning over some of his patents and research before he died, yet was unable to make contact with them.

Tesla's FBI file reveals that the Alien Property Custodian had put out an abstract on the Nikola Tesla writings they obtained, available in its entirety in the file.

Further examination of the Tesla file reveals a memo indicating that a man by the name of "Nicola Tesla" (with a "c"), who may be the same person as "Nikola Tesla" (with a "k"), made a speech at the Orange Hall in Springfield, Massachusetts, on June 4,1922, under the auspices of the Friends of Russia. The rest of this page as well as the following page and several paragraphs are entirely blacked out by FBI censors. The memo ends with a reference to another person's FBI file, someone named Kenneth (last name unreadable), and hopes that this information would be used for future reference. The memo was signed by J. Edgar Hoover.

That aspect of Tesla's file is something shared by thousands of other files we've seen over the years: deleted paragraphs and pages kept classified and secret from the eyes of the public, information that will not see the light of day any time soon. What do these pages say? What do they talk about that's so secretive that the government won't release even one word on the entire page?

Tesla's FBI file is relatively small, a mere 252 pages, but it's enough to keep you busy reading and questioning for hours. It boggles the mind realizing just how many people the FBI watched, investigated and kept files on, people whose lives we never imagined could have provoked the FBI's interest, but did.

You can find Nikola Tesla's file online, the pages mentioned above, and hundreds of others at http://www.bigbrotherswatching.com/nikola_tesla.html.

Until we again dive "Inside The Black Vault," keep a watch on the skies. See you next month! 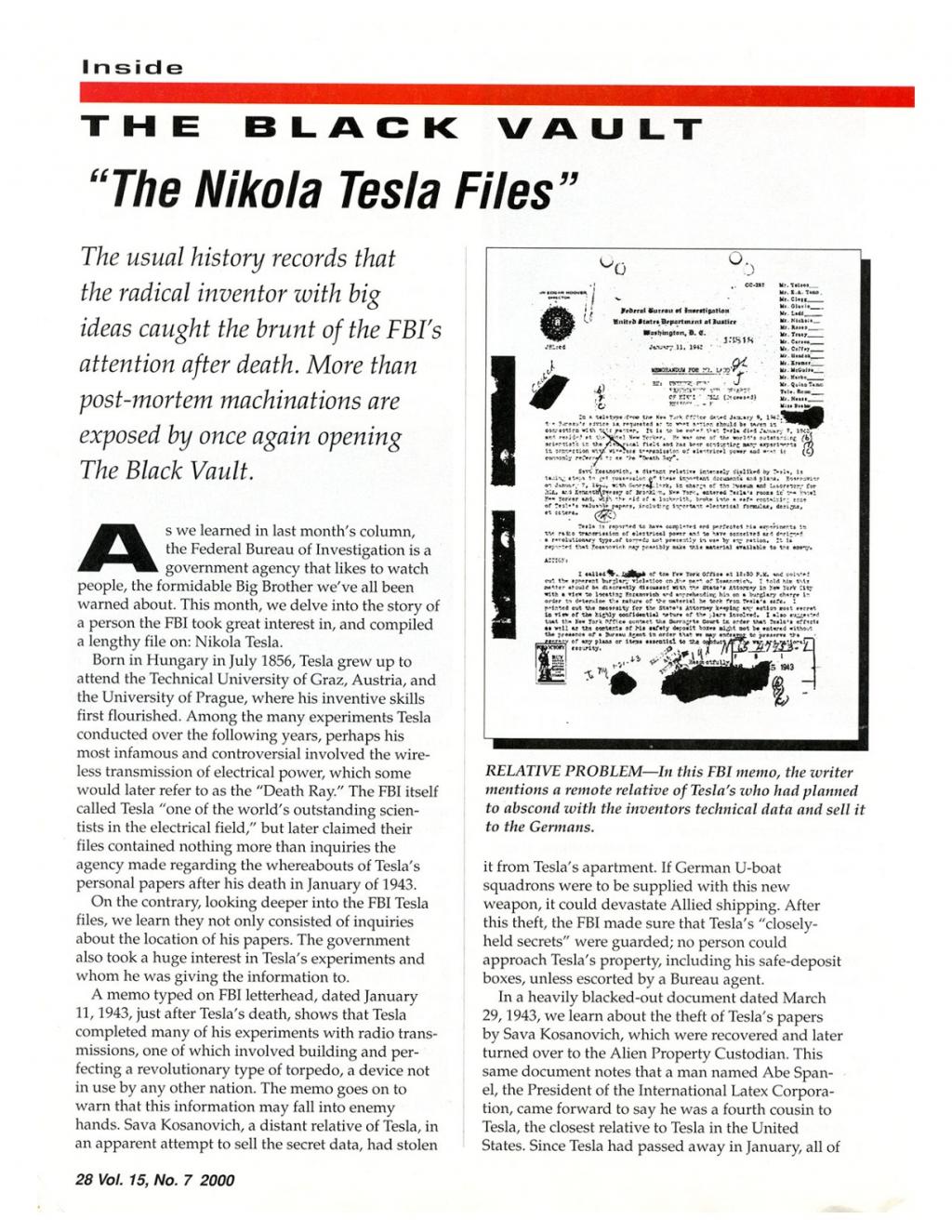