The Earth is bathed in a sea of cosmic and solar energies. Can a device be built that can transform this high frequency energy into usable power? I believe that T. H. Moray did build such a device. This has inspired me to conduct my research and to build my own prototypes. How the radiant energy device really worked might shock a few people once the facts become known.

Present day alternative energy researchers find hope in that, one day, power will be obtained from the energy that runs the Cosmos. In reality, this dream proves to be a lure to its followers, far beyond the limits of credibility. A bottomless and unreal quagmire of unsubstantiated hypotheses exists. The facts of many newly conceived energy concepts are wholly inadequate, lacking justification, and incapable of throwing any light on the promise of inexpensive, abundant sources of energy.

Nature is my best teacher. Within one of her classrooms there are mineral samples that give out pure electrical energy. They are the radioactive rocks. Did the cosmic rays create this storehouse of energy by reacting with the two densest materials on Earth, thorium and uranium? It is quite possible that these two elements found in nature derived their energy from the cosmic rays. A small percentage of these rays are capable of penetrating, without loss, hundreds of feet of solid rock.

Nikola Tesla’s investigations brought him to the conclusion that the Earth was being showered with “tiny particles, each carrying so small a charge that we are justified in calling them neutrons.” He stated that “they move with great velocity, exceeding that of light.”

The success of Moray’s radiant energy converter relied on a detector that looked like a white, powdery, stone-like mineral that he found in a railroad car, located in Abisko, Sweden. From military records we know for certain that this white mineral was “fused silica.” Silica is the chemical name for the simple oxide of silicon-silicon dioxide (SiO4). Mineralogists call this compound quartz. This is normally found in nature in its crystalline form. Finding this mineral in a fused state can only mean one thing. That, what Moray found was metamict quartz. A metamict is a crystalline mineral that loses its crystal structure due to radioactive destruction.

For this to occur the quartz had to have contained trace amounts of uranium and/or thorium, which is why it was found in a “fused” state, in a more or less amorphous state, the so-called metamict state, owing to radiation damage from a -decay of these impurities. Over the course of hundreds of millions of years, decay doses as high as 1019 decays per gram can occur, which may lead to the complete amorphization of the quartz structure.

The attractive features of the cosmic rays is their constancy. They shower down on us throughout the whole 24 hours, and if a plant is developed to use their power it will not require devices for storing energy as would be necessary with devices using wind, tide or sunlight.

All of my investigations seem to point to the conclusion that they are small particles, each carrying so small a charge that we are justified in calling them neutrons. They move with great velocity, exceeding that of light.

More than 25 years ago I began my efforts to harness the cosmic rays and I can now state that I have succeeded in operating a motive device by means of them. I will tell you in the most general way, the cosmic ray ionizes the air, setting free many charges-- ions and electrons. These charges are captured in a condenser which is made to discharge through the circuit of the motor. I have hopes of building my motor on a large scale, but circumstances have not been favorable to carrying out my plan.

If you would like all of the fine details on how Moray’s device converted what he loosely called “radiant energy” you will need to purchase my book. Radiant Energy Power Generation.

Before I move onto my public tests I would like to clear up the myth that has been going around about Tesla’s electric car. The details of this car were revealed to me by Tesla’s last known living assistant Arthur H. Matthews, E.E., and B.Sc. in 1986.

In his audio tape sent to me he states that special primary batteries with replaceable zinc electrodes powered Tesla’s electric car. This car had a “fluid transmission” and could travel at 90 miles per hour. The electric motor could run on the batteries for three hundred miles before you had to pull over and attend to the batteries and then you were on your way for another three hundred miles. Matthews claimed that there were enough spare parts in the trunk to run the car for one year! [see excerpt from transcript of Matthews tape on page 7 of this magazine]

The performance of this vehicle seems to be impossible. However, the characteristics of Tesla’s unidirectional electrical current can generate short duration high-energy that will generate high frequency oscillations when dumped through an inductive coil. This unique principle makes possible many seemingly impossible innovations.

It was this principle that was at the very heart of Tesla’s Magnifying Transmitter, also known as his “DC transformer” to his assistant Arthur H. Matthews. Edwin Gray also used this principle to run his high frequency motor. The Edwin Gray circuits do not produce “over-unity,” contrary to the rumors. His circuit is powered by battery current that is stepped up by a vibrator and transformer. This is rectified and charges a capacitor. The capacitor is part of a resonant tank circuit... the load being the inductance. The oscillations are triggered by a Poulsen arc gap, which operates on a negative resistance. The rod and screen have a quenching effect on the tank circuit.

This is a super efficient system. A radio frequency coil can be used as the inductive load and light bulbs will be lit up and you can even submerge them in water and they will still work. This type of electrical current flows through gas better than it does a solid. Tesla taught us this a long time ago.

The details of the Gray motor circuit can be found in my newly released book, Harnessing Cosmic Energy. The effects of the high frequency that the Gray device generates will be demonstrated here today with real working hardware. Moray’s device worked pretty much the same way except that radiant energy and not a car battery powered his circuitry.

The radiant energy powered ion valve is similar to the Gray conversion tube. The difference is that there is not an internal arc gap. The arcs that my circuits use are stand-alone Poulsen arc gaps. The Poulsen arc produces radio oscillations but for this to take place you need to use a hydrocarbon between the gap. However, with the ion valve in the circuit, the hydrocarbon is not required. If you want to pump energy into the tank circuit other than what the battery supplies then you will need to add a substance to the tube that will evolve radon gas.

My research has revealed that the energy devices of T. H. Moray, Alfred Hubbard, Reverend Antonio d’Angelo, Joseph Papp, and others all contained a source of radon gas. They may not have realized that this was what they were using as their fuel. We will never know this for sure. However, what we do know for certain is that they all used radium in their energy devices.

You can read all about this on my website. Some old articles are posted for your perusal. When my prototype is ready to be demonstrated I too will show how radon can be used to generate electricity. Demonstrations will have to be performed in private until my device obtains an exemption from government restrictions.

The facts show beyond a doubt that radon gas was the fuel source that has powdered many so-called “free energy” devices. You can say that these devices ran on the energy of the cosmic rays. It is these rays that created radioactive thorium and uranium that we find in the ground.

High-energy cosmic rays are really neutrons as Nikola Tesla had discovered. When a cosmic particle reacts with either thorium or uranium a radioisotope is created. This is why you see a consistent percentage of U235 all over the planet. This percentage represents an accumulation of cosmic ray bombardment over the lifetime of our world. Nature offers us this fuel that can be used to obtain electrical power with no moving parts and it is out there free for the taking. We do not have to split atoms to harness this storehouse of energy. Nature has already safely done this for us.

What Is “Cold Electricity”?

There is one last subject that I would like to address. It is the interpretation of what is being called “cold electricity.” It just frustrates me to no end when I hear theories out there that have no scientific basis to them. How on Earth can electricity be cold?

Electricity is a flow of charge. It is not a thermal state. Are we talking about a wire that loses thermal energy as a secondary effect due to the passage of electrical current? If so, this is nothing new nor is it strange. Have you ever heard about electrostatic cooling? 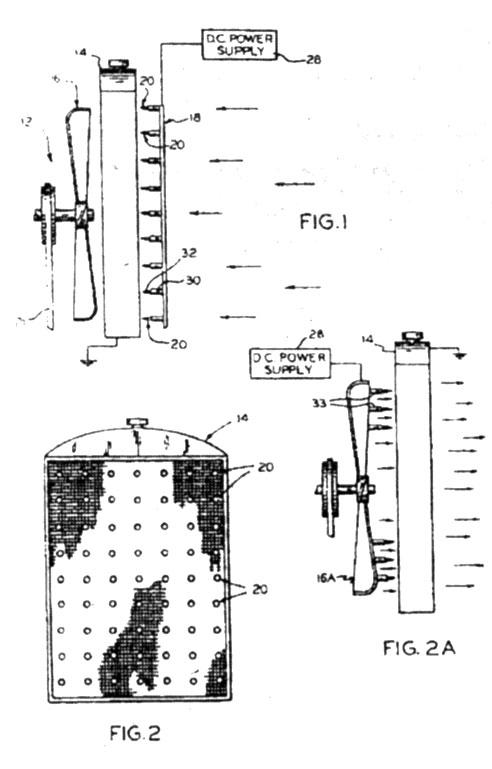 The mechanism that enables the electrostatic field to cool a surface is not fully understood, but it is believed that the electrostatic field breaks the skin of the insulating molecules that normally adheres to the surface of the cooling tubes. This skin of molecules is not normally removed by the flow of air down to the fan 12, and when present reduces the transfer of heat from the tube walls.

The high intensity electrostatic field near the tips of the electrodes 32 creates corona, which ionizes some of the molecules in the air. Ions and electrons are accelerated toward the cooling tubes. The bombarding ions disturb or condition the boundary layer to increase materially the coefficient of heat transfer...

United States Patent 3,872,917 was granted to Oscar C. Blomgren Sr. This patent utilizes the principle of electrostatic cooling. It makes use of high-voltage negatively charged probes that are placed near the hot object, which is grounded. This extremely simple system uses very low power and is very efficient. This invention could also be used to remove thermal energy from a wire.

It works because negative air ions carry the heat away with them and are dumped into the ground. It should not be too difficult to design a unit that could chill electrical wires to the point where a frost would appear. What has just been described is a solid state electrostatic heat pump. There is no mystery here and certainly there is no new science involved.

For almost fifteen years now I have carried out many experiments. The fruits of this research are now ripening. Many fruits are within grasp but they are not yet quite ripe for the picking. The intent of revealing my progress to the World is to insure that this work is not done in vain.

Through my writings I have attempted to explain the many facets of “radiant energy” and how it is possible to draw usable power from it. If radiant energy can be given to the World then humankind will have the potential to reach heights not yet dreamed or conceived. Today, I freely give to you the results of my life’s work. Together we can reclaim our independence!

Editors Note: This lecture and demonstration was presented at the 2001 Exotic Research Conference in Sacramento, CA. Ordering information for videotapes of this presentation can be found on page 6 of this issue. 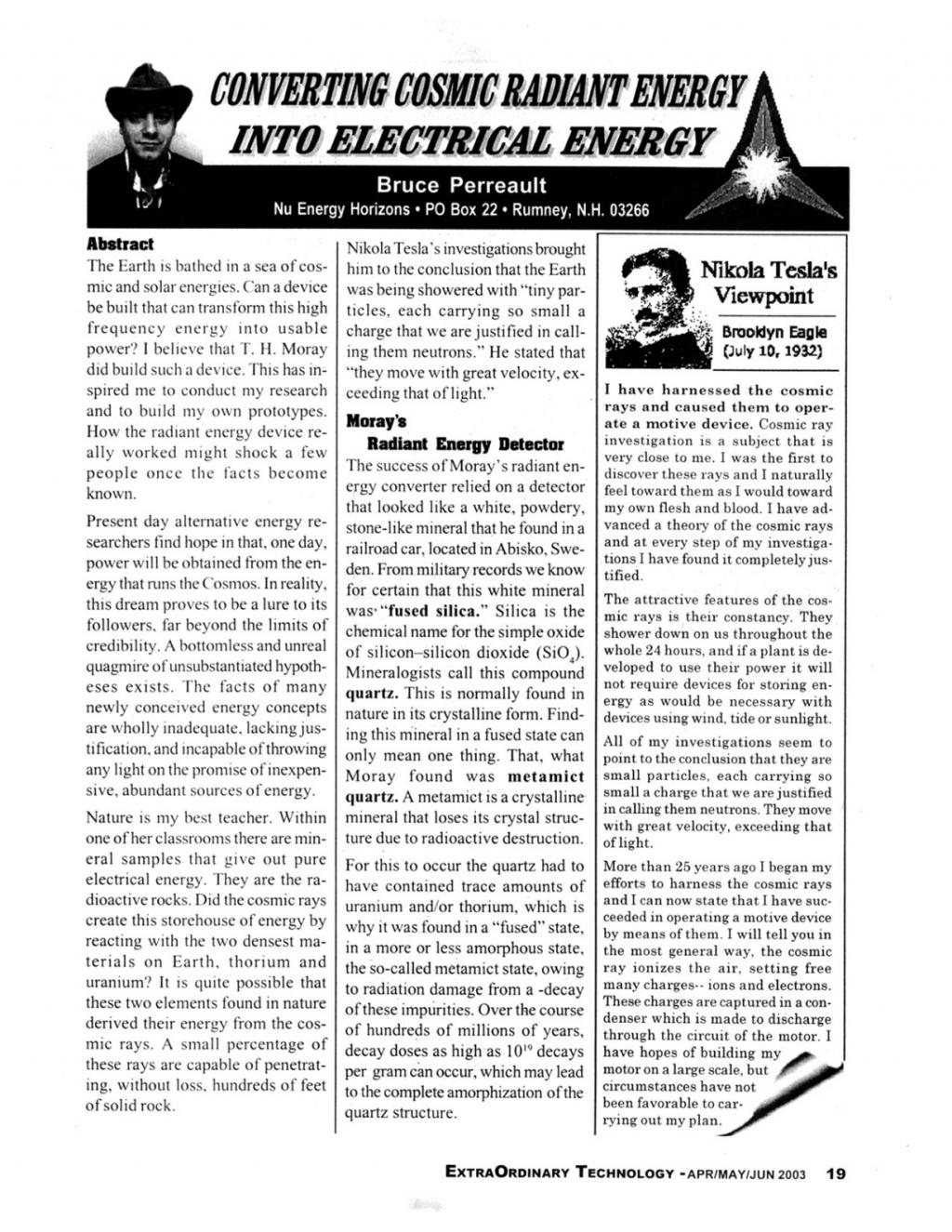