To the Editors of the Electrical World:

There are countless worlds such as ours in the universe — planets revolving around their suns in elliptical orbits and spinning on their axes like gigantic tops. They are composed of the same elements and subject to the same forces as the earth. Inevitably at some period in their evolution light, heat and moisture are bound to be present, when inorganic matter will begin to run into organic forms. The first impulse is probably given by heliotropism; then other influences assert themselves, and in the course of ages, through continuous adjustment to the environment, automata of inconceivable complexity of structure result. In the workshop of nature these automatic engines are turned out in all essential respects alike and exposed to the same external influences.

The identity of construction and sameness of environment result in a concordance of action, giving birth to reason; thus intelligence, as the human, is gradually developed. The chief controlling agent in this process must be radiant energy acting upon a sense organ as the eye, which conveys a true conception of form. We may therefore conclude with certitude that, however constructively different may be the automata on other planets, their response to rays of light and their perceptions of the outside world must be similar to a degree so that the difficulties in the way of mutual understanding should not be insuperable.

Irrespective of astronomical and electrical evidences, such as have been obtained by the late Percival Lowell and myself, there is a solid foundation for a systematic attempt to establish communication with one of our heavenly neighbors, as Mars, which through some inventions of mine is reduced to a comparatively simple problem of electrical engineering. Others may scoff at this suggestion or treat it as a practical joke, but I have been in deep earnest about it ever since I made the first observations at my wireless plant in Colorado Springs from 1889 to 1900. Those who are interested in the subject may be referred to my articles in the Century Magazine of June, 1900, Collier’s Weekly of Feb. 9, 1901, the Harvard Illustrated Magazine of March, 1907, the New York Times of May 23, 1909, and the New York Herald of Oct. 12, 1919.

At the time I carried on those investigations there existed no wireless plant on the globe other than mine, at least none that could produce a disturbance perceptible in a radius of more than a few miles. Furthermore, the conditions under which I operated were ideal, and I was well trained for the work. The arrangement of my receiving apparatus and the character of the disturbances recorded precluded the possibility of their being of terrestrial origin, and I also eliminated the influence of the sun, moon and Venus. As I then announced, the signals consisted in a regular repetition of numbers, and subsequent study convinced me that they must have emanated from Mars, this planet having been just then close to the earth.

Since 1900 I have spent a great deal of my time in trying to develop a thoroughly practical apparatus for the purpose and have evolved numerous designs. In one of these I find that an activity of 10,000,000,000 hp. in effective wave energy could be attained. Assuming the most unfavorable conditions—namely, half-spherical propagation—then at a distance of 34,000,000 miles the energy rate would be about i^Vinr nP* ^er sQuare mile, which is far more than necessary to affect a properly designed receiver. In fact, apparatus similar to that used in the transmission of pictures could be operated, and in this manner mathematical, geometrical and other accurate information could be conveyed.

I was naturally very much interested in reports given out about two years ago that similar observations had been made, but soon ascertained that these supposed planetary signals were nothing else than interfering undertones of wireless transmitters, and since I announced this fact other experts have apparently taken the same view. These disturbances I observed for the first time from 1906 to 1907. At that time they occurred rarely, but subsequently they increased in frequency. Every transmitter emits undertones, and these give by interference long beats, the wave length being anything from 50 miles to 300 or 400 miles. In all probability they would have been observed by many other experimenters if it were not so troublesome to prepare receiving circuits suitable for such long waves.

The idea that they would be used in interplanetary signaling by any intelligent beings is too absurd to be seriously commented upon. These waves have no suitable relation to any dimensions, physical constants or succession of events, such as would be naturally and logically considered in an intelligent attempt to communicate with us, and every student familiar with the fundamental theoretical principles will readily see that such waves would be entirely ineffective. The activity being inversely as the cube of the wave length, a short wave would be immensely more efficient as a means for planetary signaling, and we must assume that any beings who had mastered the art would also be possessed of this knowledge. On careful reflection I find, however, that the disturbances as reported, if they have been actually noted, cannot be anything else but forced vibrations of a transmitter and in all likelihood beats of undertones.

While I am not prepared to discuss the various aspects of this subject at length, I may say that a skillful experimenter who is in the position to expend considerable money and time will undoubtedly detect waves of about 25,470,000 m. 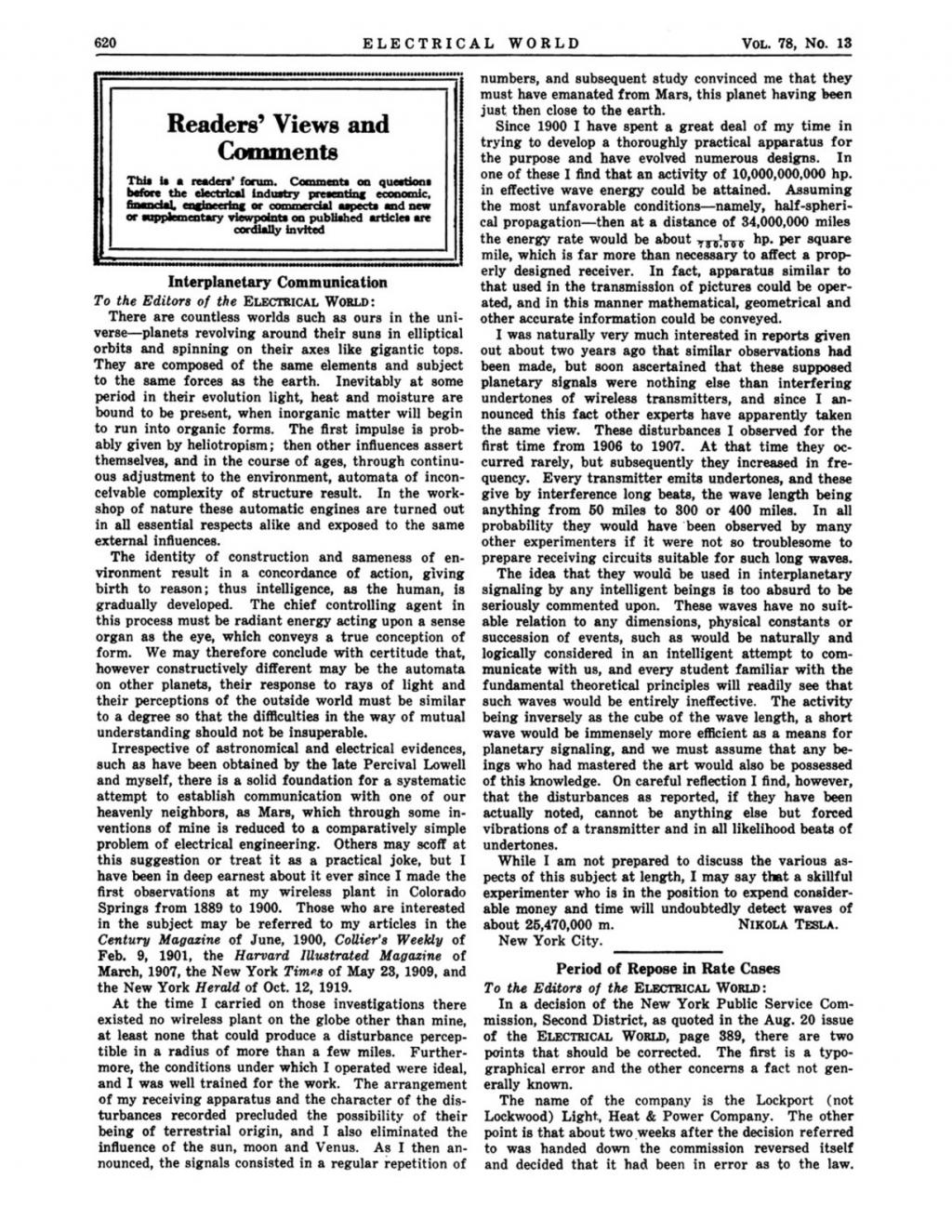