There is no doubt about it — your heart does beat faster when you are about to meet a famous electrical scientist, one of the foremost in the world. Before you go you don’t think so. It didn’t beat a second faster when you entered the outer office, perhaps; but as I stood on the threshold of the big waiting room where Mr. Nikola Tesla does his day’s work my nerves were highly strung. Why? Why hadn’t I felt like this when I had talked to other great inventors and scientists? I had been impressed, truly, by these men, but not to any such extent as when I entered the room where the master electrical wizard lives; he who has produced electrical discharges resembling lightning bolts.

After a few minutes, I was ushered into the presence of Mr. Nikola Tesla, who stood in the corner of the room awaiting me. I asked him regarding his latest achievements, but Mr. Tesla only smiled and told me first of some of his experiences some years ago, when he produced some of the largest electrical discharges ever attempted by man. He spoke of some of his wonderful experiments with high frequency currents at high potentials, which he made in 1899. The photograph Fig. 1, herewith shown, is one of the large Tesla apparatus for the production of very high frequency, high tension currents. This apparatus was built in 1899 for his plant at Colorado Springs. At this plant and in the same year he made a number of valuable discoveries. Among these was one on which a patent was recently granted to him. This patent covers the method of production of extra large electrical discharges, such as here shown.

This display of sparks will be the more appreciated when it is stated that the streamers from end to end measure 70 feet and the current leaping into the air is
800 amperes, with a maximum potential of 12,000,000 volts. The power supplied to this machine was 300 kilowatts. These voltages are high enough, but Mr. Tesla designed larger apparatus capable of reaching a tension of 100,000,000 volts. A machine of such power must be handled with the utmost care, as the slightest carelessness may kill the experimenter; even if he were at a considerable distance from the machine. Mr. Tesla stated that he had had several narrow escapes while experimenting in 1899, caused by “balls of fire” striking out into the atmosphere.

The metal balls of the coil here shown are 80 cm. in diameter. The current oscillates at a frequency of 75,000 cycles per second. Some of these discharges were two and one-half times as large as common lightning discharges, and they could be heard twelve miles away from the apparatus. Mr. Tesla is observed seated and reading one of Faraday’s scientific books.

This remarkable man has spent a fabulous amount of time and money in perfecting his apparatus for the transmission of electrical energy without the aid of any wires. The smaller photo, Fig. 2, shows Mr. Tesla holding in his hands a 14-inch glass bulb, which is highly exhausted and containing a drop of mercury. The electrical power received by this tube is obtained from a loop of wire located behind the screen, which is supplied with an ultrahigh frequency current. The tube was not connected in any way to the apparatus. As soon as the current was sent through the wire loop a high potential current was induced in the bulb, which vaporized the drop of mercury, causing it to give forth a blinding light of thousands of candlepower. The photograph was taken by the light of this tube, with an instantaneous or snap-shot exposure. Mr. Tesla has a number of startling new discoveries and inventions in the electrical field, which he does not care to announce at present, and he considers these latter of greater moment than any electrical work he has so far done. He intends in the near future to transmit wirelessly speech and energy around the world from his very powerful electric wave station on Long Island, which is as yet not completed, but which will be finished soon undoubtedly. Mr. Tesla stated, “that the day will soon come when he will show the world that the transmission of power and speech without the aid of any wires is possible.”

Mr. Tesla was the first inventor of the induction motor and the system of alternating current power transmission, popularly known as two-phase, three-phase, or poly-phase systems, which created a revolution in electrical engineering and are now universally adopted.

His most important recent work is the discovery of a new mechanical principle which he has embodied in a great variety of machines, such as reversible gas, steam and water turbines, mechanical transformers and transmitters of power, etc. This principle enables the production of prime movers capable of developing ten horsepower, or even more, for each pound of weight in the machine. His present prime mover could be very successfully used in the propulsion of vessels at extremely high speeds, he explained.

The allotted time grew short, and in a few minutes the great inventor bid me adieu and I left the presence of one of the world’s most distinguished scientists of whom it has rightly been said: “He lives a hundred years ahead of his time.” 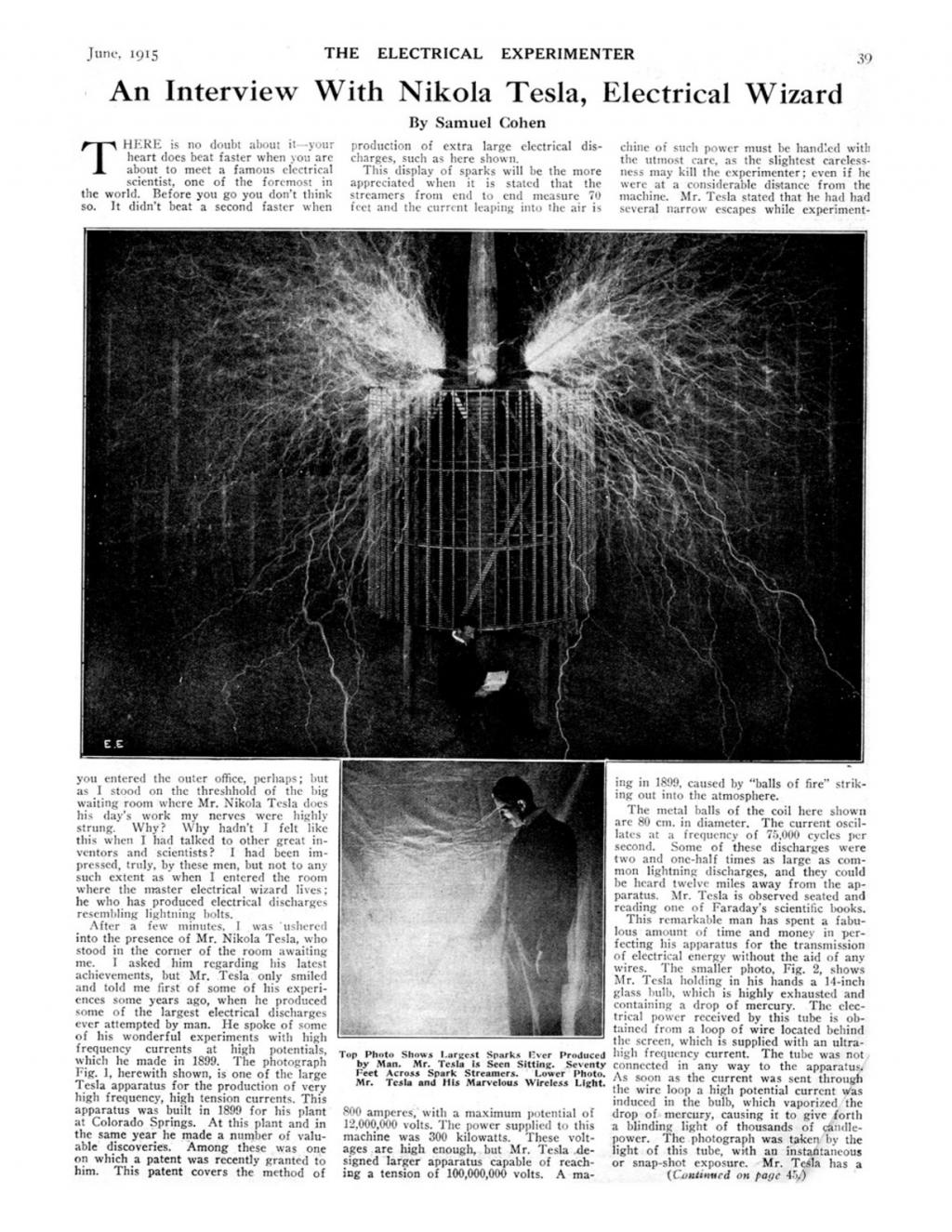