It is a curious fact that, old as fountains are, they have remained essentially unchanged in principle for centuries. Artists have lavished all their skill upon them to make them beautiful, but engineers have neglected them. To be sure independent pumps of small volumetric capacity have been used to create artificial waterfalls and to use the same water over
and over again. But this principle is old and the spectacle offered to the eye not a great improvement over the fountains of olden times.

Two types of fountain have chiefly prevailed — the cascade in which a moderate volume of water falls in thin but brilliant sheets over multiplied obstructions — steps, basins, rocks, etc. — always in a framework of architecture with abundant obstructive accessories; and the isolated or central fountain, in which one or many jets, spouted upward, fall into the highest of a series of superposed bowls of marble or bronze and then into a larger one below and so on into a broad basin at the ground level. Although every effort was made to save water and to obtain the maximum effect, still we find that in most European cities, fountains are allowed to play only on certain days of the week, and then only for a few hours. It may be safely said that not since the days of the Italian Renaissance has any really startling improvement been made in the hydraulics of fountains.

Into this neglected field, Mr. Nikola Tesla, the distinguished engineer, has entered, and as mIght be expected of him, with very strikng results. He has recently patented a fountain of entirely new principle, and one moreover in which imposing effects are obtained with very simple apparatus and with a very small volume of water. The accompanying illustration pictures the very simplest form of fountain which can be constructed, according to Mr. Tesla’s ideas. A shaft runs vertically through the central column of the fountain, carrying at its lower end a propeller, and at its upper end an electric motor, suitably braced. In our illustration we show this propeller shaft contained in a tube, the bottom of which is provided with inlets for the water in the main bowl. As the propeller is made to revolve the water is sucked in by the propeller blades through the inlets, and is urged upward in the direction of the arrows. It fills the upper bowl and then overflows in a miniature waterflow of impressive sIze.

As the circulation is extremely rapid, the total quantity of water required is comparatively small. About one tenth of that delivered per minute will be generally sufficient. In this fountain then, we find a great mass of water propelled by the use of only such power as is required to lift it from its normal level through a relatively short space to that from which it overflows and descends as a waterfall or cascade. In that sense it is a radical departure from historic fountains.

The apparatus not only makes the breeding of insects impossible, but is in a sense a very efficient trap. 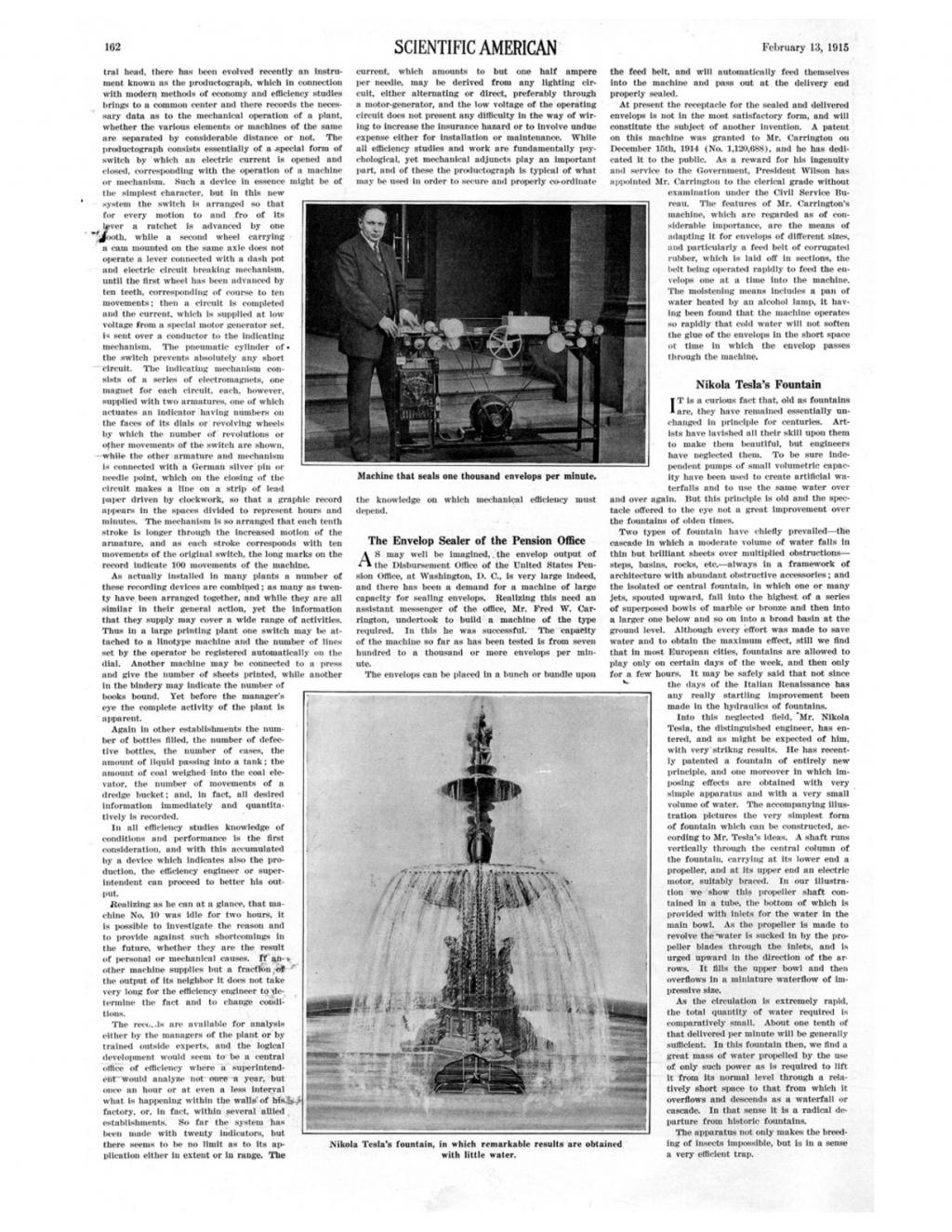