So Says Nikola Tesla — But He is Working on One of His Own.

It was not a little amusing to read a short time ago how the “great secret” of the aeroplane was revealed. By surrounding that old device with an atmosphere of mystery one gives life and interest to the report; but the plain fact is that all forms of aerial apparatus are well known to engineers, and can be designed for any specific duty without previous trials and with a fair degree of accuracy. The flying machine has materialized — not through leaps and bounds of invention, but by progress slow and imperceptible, not through original individual effort, but by a combination of the same forces which brought forth the automobile, and the motorboat. It is due to the enterprise of the steel, oil, electrical, and other concerns, who have been instrumental in the improvement of materials of construction and in the production of high-power fuels, as well as to the untiring labors of the army of skilled but unknown mechanics who have been for years perfecting the internal combustion engine.

There is no salient difference between the dirigible balloon of Renard & Krebs of thirty years ago and that of Santos Dumont with which the bold Brazilian performed his feats. The Langley and Maxim aerodromes, which did not soar, were in my opinion better pieces of mechanism than their very latest imitations. The powerful gasoline motor which has since come into existence is practically the only radical improvement.

So far, however, only the self-propelled machine or aerial automobile is in sight. While the dirigible balloon is rapidly nearing the commercial stage, nothing practical has as yet been achieved with the heavier-than-air machine. Without exception the apparatus is flimsy and unreliable. The motor, too light for its power, gives out after a few minutes’ run; the propeller blades fly off; the rudder is broken, and, after a series of such familiar mishaps, there comes the inevitable and general smash-up. In strong contrast with these unnecessarily hazardous trials are the serious and dignified efforts of Count Zeppelin, who is building a real flying machine, safe and reliable, to carry a dozen men and provisions over distances of thousands of miles, and with a speed far in excess of those obtained with aeroplanes.

The limits of improvement in the flying machine, propelled by its own power, whether light or heavy, are already clearly defined. We know very closely what we may expect from the ultimate perfection of the internal combustion engine, the resistances which are to be overcome, and the limitations of the screw propeller. The margin is not very great. For many reasons the wireless transmission of power is the only perfect and lasting solution of the problem of aerial navigation. But even then it will scarcely be possible to reach very high speeds.

In this respect many experts are mistaken. The popular belief is that because the air has only one-hundredth the density of water, enormous velocities should be practicable. But it is not so. It should be borne in mind that the air is one hundred times more viscous than water, and because of this alone the speed of the flying machine could not be much in excess of a properly designed aqueous craft.

The aeroplanes of the Langley type, such as was used by Farman and others with some success, will hardly ever prove a practical aerial machine, because no provision is made for maintaining it in the air in a downward current. This and the perfect balance independently of the navigator’s control is absolutely essential to the success of the heavier-than-air machine. These two improvements I am myself endeavoring to embody in a machine of my own design. 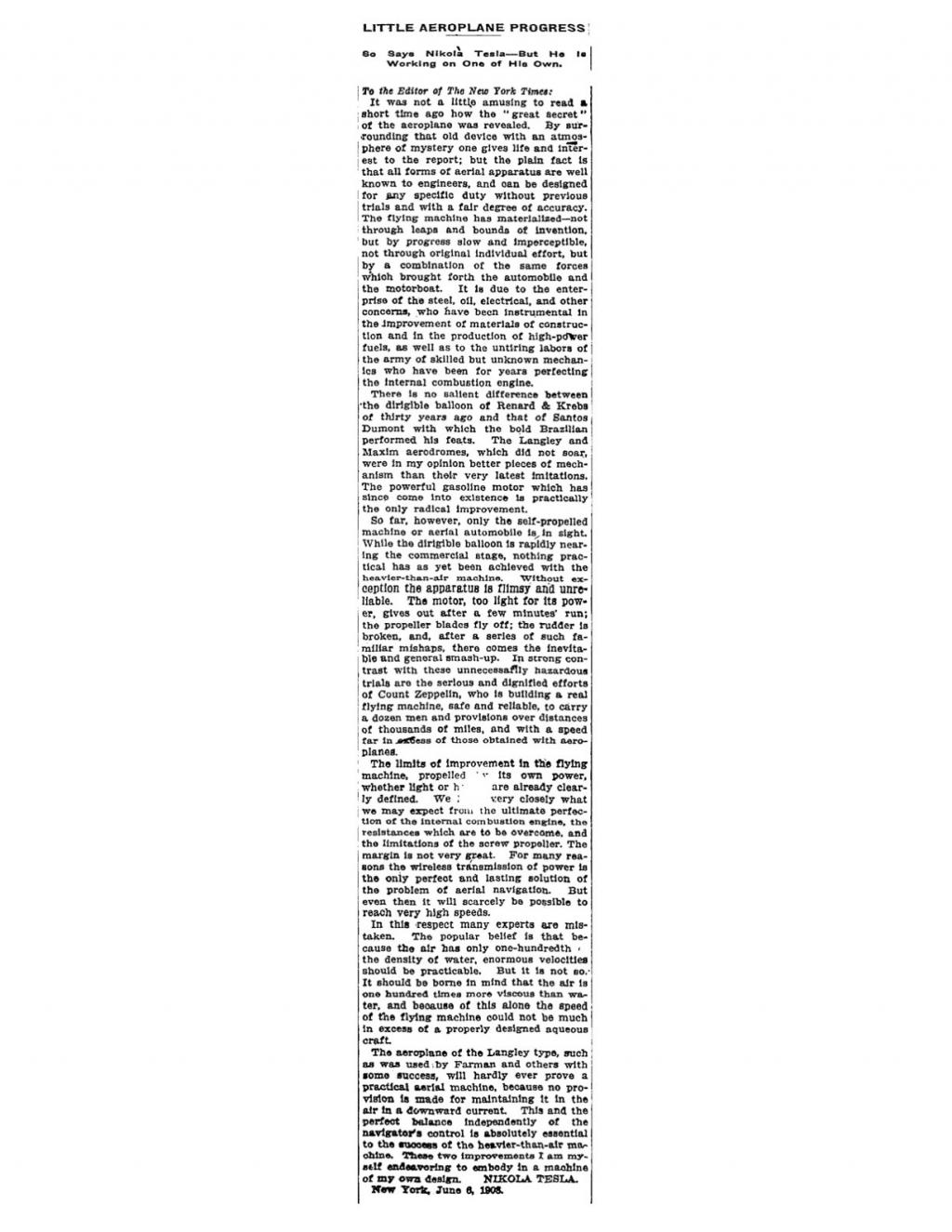