How the Electrician’s Lamp of Aladdin May Construct New Worlds.

From a report in your issue of March 11, which escaped my attention, I notice that some remarks I made on the occasion referred to have been misunderstood. Allow me to make a correction..

When I spoke of future warfare I meant that it should be conducted by direct application of electrical waves without the use of aerial engines or other implements of destruction. This means, as I pointed out, would be ideal, for not only would the energy of war require no effort for the maintenance of its potentiality, but it would be productive in times of peace. This is not a dream. Even now wireless power plants could be constructed by which any region of the globe might be rendered uninhabitable without subjecting the population of other parts to serious danger or inconvenience.

What I said in regard to the greatest achievement of the man of science whose mind is bent upon the mastery of the physical universe, was nothing more than what I stated in one of my unpublished addresses, from which I quote: “According to an adopted theory, every ponderable atom is differentiated from a tenuous fluid, filling all space merely by spinning motion, as a whirl of water in a calm lake. By being set in movement this fluid, the ether, becomes gross matter. Its movement arrested, the primary substance reverts to its normal state. It appears, then, possible for man through harnessed energy of the medium and suitable agencies for starting and stopping ether whirls to cause matter to form and disappear, at his command, almost without effort on his part, old worlds would vanish and new ones would spring into being. He could alter the size of this planet, control its seasons, adjust its distance from the sun, guide it on its eternal journey along any path he might choose, through the depths of the universe. He could make planets collide and produce his suns and stars, his heat and light; he could originate life in all its infinite forms. To cause at will the birth and death of matter would be man’s grandest deed, which would give him the mastery of physical creation, make him fulfill his ultimate destiny.”

Nothing could be further from my thought than to call wireless telephony around the world “the greatest achievement of humanity” as reported. This is a feat which, however stupifying, can be readily performed by any expert. I have myself constructed a plant for this very purpose. The wireless wonders are only seeming, not results of exceptional skill, as popularly believed. The truth is the electrician has been put in possession of a veritable lamp of Aladdin. All he has to do is to rub it. Now, to rub the lamp of Aladdin is no achievement,

If you are desirous of hastening the accomplishment of still greater and further — reaching wonders you can do no better than by emphatically opposing any measure tending to interfere with the free commercial exploitation of water power and the wireless art. So absolutely does human progress depend on the development of these that the smallest impediment, particularly through the legislative bodies of this country, may set back civilization and the cause of peace for centuries. 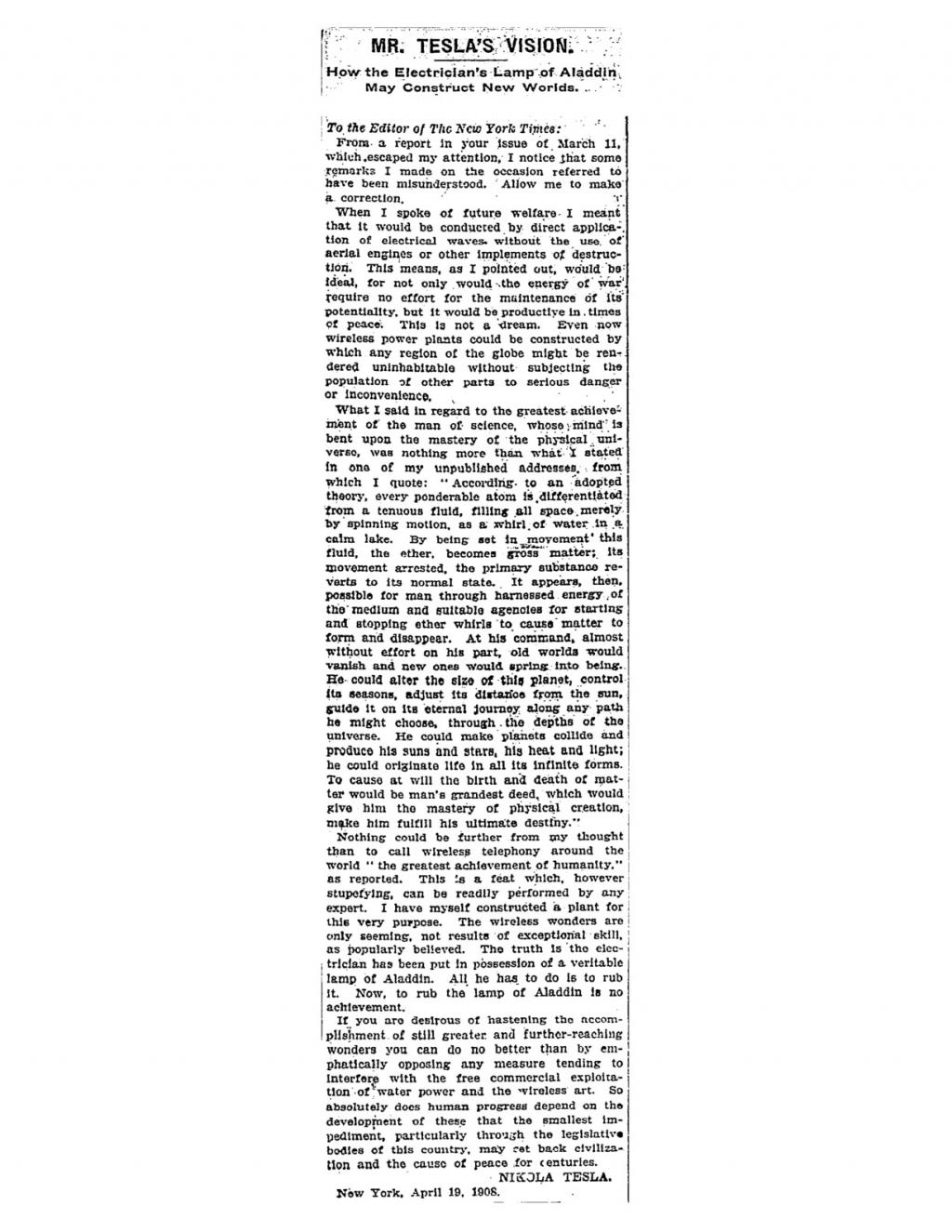