His Name Is Branding Magic; Thomas Edison Is ‘So 20th Century’

Decades after he died penniless, Nikola Tesla is elbowing aside his old adversary Thomas Edison in the pantheon
of geek gods.

When California engineers wanted to brand their new $100,000 electric sports car, one name stood out: Tesla. When circuit designers at microchip producer Nvidia Corp. in 2007 launched a new line of advanced processors, they called them Tesla. And when videogame writers at Capcom Entertainment in Silicon Valley needed a character who could understand alien spaceships for their new Dark Void saga, they found him in Nikola Tesla.

Tesla was a scientist and inventor who achieved fame and fortune in the 1880s for figuring out how to make alternating current work on a grand scale, electrifying the world. He created the first major hydroelectric dam, at Niagara Falls. He thrilled packed theaters with presentations in which he ran high voltage through his body to illuminate a fluorescent light in his hand. His inventions helped Guglielmo Marconi develop radio.

And his rivalry with Edison — called the Battle of the Currents because Edison had bet on direct current — was legendary. Tesla won the contest, when his AC equipment powered an unprecedented display of electric light at the 1893 Chicago World's Fair.

Fifty years later, the 86-year-old Serbian emigré died in obscurity at a New York hotel, unmarried, childless and bereft of friends. Meanwhile, Edison was lionized for generations as one of America's greatest inventors. But Tesla has been rediscovered by technophiles, including Google Inc. co-founder Larry Page, who frequently cites him as an early inspiration. And Teslamania is going increasingly mainstream.

An early hint was “Tesla Girls,” a 1984 single from the British technopop band Orchestral Manoeuvres in the Dark. Performance artist Laurie Anderson has said she was fascinated by Tesla. David Bowie played a fictionalized version of him in the 2006 film “The Prestige,” alongside Christian Bale and Hugh Jackman. Director Terry Gilliam described Tesla in a recent documentary film as “more of an artist than a scientist in some strange way.”

Tesla, in short, is cool.

“He was a kind of crazy, interesting dude,” says Melody Pfeiffer, spokeswoman for the Dark Void game's distributor, Capcom Entertainment.

Edison, meanwhile, is less au courant than he used to be, says Paul Israel, director of the Thomas Edison Papers, a scholarly project at Rutgers University, in Piscataway, N.J.

Many significant Edison inventions — including the phonograph and the motion-picture camera — are becoming historical curios. The European Union has banned old-fashioned incandescent light bulbs, another Edison innovation. The EU is urging consumers to replace them with more-efficient fluorescent lights descended from those Tesla favored.

“Edison is so 20th century, much like Henry Ford,” says Bernie Carlson, a professor of Science, Technology and Society at the University of Virginia.

Once, Edison was revered as the Wizard of Menlo Park, after the New Jersey town — since renamed Edison — where he built a laboratory and movie studio. But Edison biographies have started focusing on his role in establishing monopolies in the electricity and movie industries.

Recent portrayals of Edison have highlighted his darker side. In the 1998 HBO miniseries “From the Earth to the Moon,” Tom Hanks plays a French filmmaker who was financially ruined when Edison secretly copied and then released his 1902 epic, “A Trip to the Moon,” without paying its creator.

The Tesla-Edison rivalry was intense partly because the highly educated young engineer sailed to America in 1884 to work for Edison. But after less than a year in Edison's labs, Tesla quit in a spat over pay.

Tesla-boosters note that in Edison's effort to discredit alternating current a decade later, his staff deliberately electrocuted a murderous circus elephant and profited from a popular film of the killing. To sully Tesla's ideas, Edison's men also helped orchestrate the first execution by electric chair.

“I can't imagine writing a song about Edison...too boringly rich, entrepreneurial and successful!” said Andy McCluskey, a founder of Orchestral Manoeuvres in the Dark, in an email. He calls Tesla “a romantic ‘failure’ figure.” In 1895 — after selling his AC patents to industrialist George Westinghouse for a mint and harnessing Niagara Falls — Tesla hobnobbed with Mark Twain, J.P. Morgan and French actress Sarah Bernhardt. But troubles soon began.

Tesla's laboratory in New York was destroyed by fire, along with years of work and notes. The secretive experimenter then burned through much of his fortune testing radio transmissions in Colorado Springs, Colo. In 1898, he demonstrated a pair of small radio-controlled boats — decades before guided torpedoes — but was rebuffed by the U.S. military. When Marconi changed the world with a trans-Atlantic radio transmission in 1901, Tesla wasn't mentioned.

Undaunted, the scientist continued to be far ahead of his time. His papers suggest he stumbled upon — but didn't pursue — lasers and X-rays, years before their recognized discoveries. He proposed transmitting electricity through the upper atmosphere. He sketched out robots and a death ray he hoped would end all wars.

“There's a sort of science-fiction aspect to Tesla,” says Prof. Israel at Rutgers.

For marketers at chip makers Nvidia, who were targeting the techno-cognoscenti with a new product line, that aura is priceless.

“A mythology has built up around Tesla that catches people's imagination,” says Andy Keane, general manager of Tesla Products at Nvidia.

Tesla's more outlandish pronouncements stoked that mythology. He said he could use electricity to cause earthquakes and control weather. He claimed to have detected signals from Mars while he was in Colorado.

Unlike Edison, who died in 1931 with 1,093 patents to his name, Tesla left few completed blueprints. The shortcoming undercut his legacy but added to the air of mystery surrounding him.

“Tesla's work is incomplete, so people can read into it what they want to,” says Prof. Carlson at the University of Virginia.

Christopher Priest did just that in writing “The Prestige,” his novel and then movie about rival magicians in Victorian London. In it, one of the magicians visits Tesla in Colorado and pays him to create a machine unlike anything the real Tesla ever mentioned.

“I wanted an ambiguous, mysterious genius,” says Mr. Priest. “Tesla was the man for the job.”

Creators of the Dark Void videogame needed a mentor for their hero, Will, who falls from our world into a parallel realm ruled by sinister aliens bent on annihilating humans.

“We quickly decided that tapping into the conspiracies and geek mystique built up around Nikola Tesla would be awesome,” says senior producer Morgan Gray. “What is cooler than having Tesla reverse-engineer alien technology to build weapons of super science?”

At Tesla Motors, the branding isn't simply an effort to ride the name's nerdy snob appeal, says spokeswoman Rachel Konrad. The Tesla Roadster uses an AC motor descended directly from Tesla's original 1882 design, which he said came to him in a vision.

To help boost the Tesla name, the automotive start-up has launched a promotional sweepstakes with Capcom around the release of Dark Void. The prize: a Tesla Roadster.

For Nikola Tesla himself, Ms. Konrad says, the prize is overdue recognition.

“You know you've gone into mainstream pop glory when you're in a videogame aimed at 18-year-old boys,” she says. 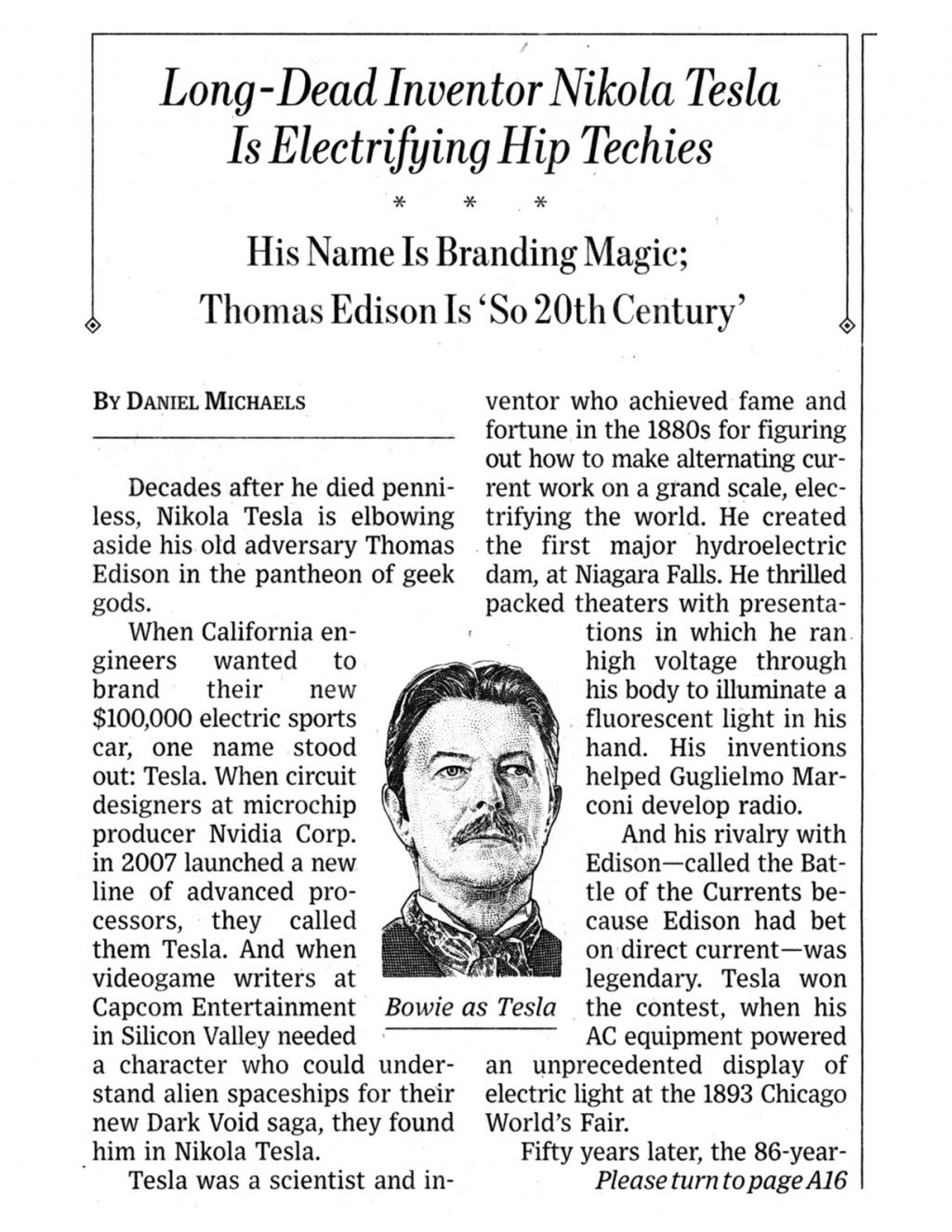