The electrical world is just now experiencing a thrill of delight because of the remarkable experiments of Nikola Tesla, a young Austro-Hungarian, who has made this city his home and who promises to become famous in his profession. The particular subject upon which this gentleman has so wonderfully perfected himself is that of alternating currents of high frequency, a subject on which he recently delivered a lecture at Columbia College before the American Institute of Electrical Engineers.

While there was much in Mr. Tesla's paper that applied to the most occult branches of theoretical electricity, there was also much that appealed to the layman because of the great promise it gave of future commercial importance. Mr. Tesla is now engaged in perfecting an improved system of electric lighting, by which, from a given amount of electrical energy, a light many times stronger than any yet produced may be secured without wires or pipes of any kind connecting with the light itself. Wires from a station leading to the building to be lighted will still be employed, and much of the machinery that is now used in an ordinary incandescent-lighting plant will be used, but with the difference that the lamps may be carried about in the hand, that the walls and ceilings will not be defaced by wires and pipes, and that the light will be very much stronger than that now in use. The methods by which Mr. Tesla was led to these conclusions are obtained from his paper, which has just been made public.

His attention was first drawn to an ordinary induction coil from which sparks are developed similar to those evolved from a static frictional electric machine. The currents that operated these coils were alternating, with from 100 to 200 vibrations a second. In order to obtain greatly increased effects Mr. Tesla constructed a machine which produced 20,000 alternations per second. This experiment resulted in several interesting phenomena.

By attaching a wire to one of the terminals of such a coil streams of light issued in all directions, showing how intense was the nature of the forces at work. He then placed a fine platinum wire in a glass bulb and the tremendous force of the current set the platinum to spinning about in a veritable cone of illumination. This led to the construction of a practical form of lamp, consisting of a glass bulb from which the air had been exhausted, and which contained a button of some refractory material connected with a wire leading to the outside of the bulb. This lamp glowed brightly. It established the first point of Mr. Tesla's experiments by doing away with the two-wire system now in use.

This, however, by no means satisfied him. “The use of alternating currents of very high frequency,” he says, “makes it possible to transfer by electrostatic or electromagnetic induction through the glass of a lamp sufficient energy to keep a filament at incandescence, and so do away with the leading-in wires.” In other words, he contemplated the creation of a lamp without external connections of any sort, which, placed anywhere in an apartment, should glow brightly. He produces a sketch showing the manner in which he proposes to carry out such a system in practice. There is a primary electric generator at the central station, with wires leading to the building or apartment where the light is desired. At this point there is placed in the circuit an apparatus similar in principle to the Leyden jar, called a condenser.

An induction coil close to it converts the currents of low potential coming from the machine to those of the very high potential required in the new method. The room which is to be lighted contains two sheets of metal, which may be suspended from the ceiling or placed within opposite walls. The electric impulses thrown out by the metallic plates fill the room with an electrical force. The force becomes especially manifest when there is exposed in the room a medium especially susceptible to its action, such as tubes exhausted of air. With such plates properly placed in the room “an exhausted tube,” says Mr. Tesla, “may be carried in the hand anywhere between the sheets or placed anywhere, even at a certain distance beyond them; it remains always luminous.” 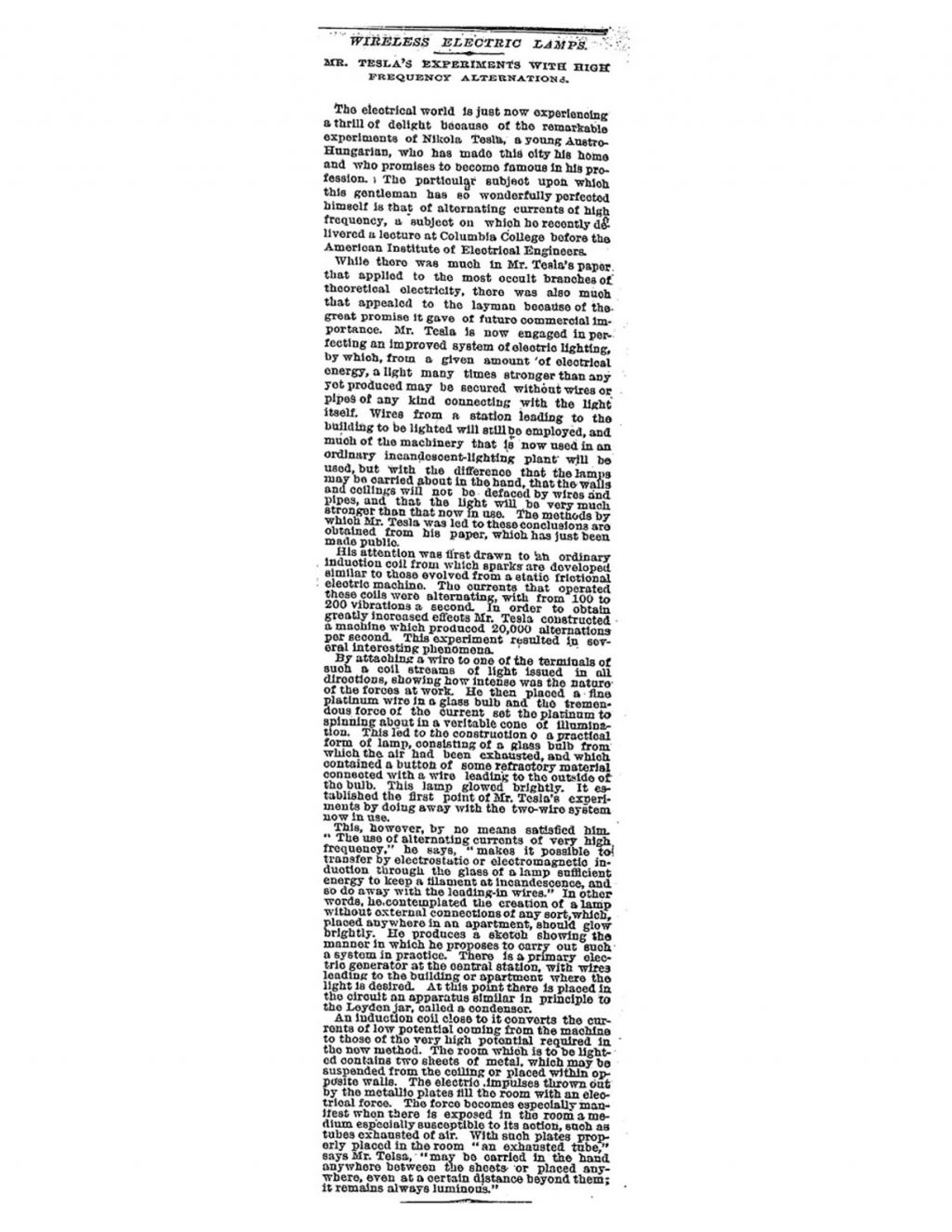