A Scientific Problem That Electrician Tesla Has on Hand.

Tesla had two big undertakings on hand when his laboratory caught fire and was destroyed in New York. The more important of these, from his point of view, was the production of light by the vibration of the atmosphere. According to the inventor, the light of the sun is the result of vibrations in 94,000,000 miles of ether, which separate us from the centre of the solar system of which we are a part. Tesla’s idea is to produce here on earth vibrations similar to those which cause sunlight, and thus give us a light as intense as that of the sun, with no danger of obstruction from the clouds. The inventor had already done something toward accomplishing this end when the fire occurred. It is understood that he has again taken the subject up in a way. To illustrate his principle it is only necessary to take a long bar of glass and note the brilliancy of the light it produces through vibration alone. It is a prismatic experiment, in general terms, applied to electricity.

Tesla can compute vibrations as readily as most people count the wealth they would like to have. He can tell you the number of vibrations produced by a fly in action and draw interesting comparisons therefrom. For example, this young man from Smiljan will tell you that a certain kind of fly peculiar to the swamps of Central America moves his wings about 25,000 times to the second. You may doubt the accuracy of this statement in your own mind, but if you hunger for details Tesla will sit down and convince you with figures adduced from a scientific contemplation of the problem.

“All I have to do,” he said, recently, “is to duplicate the number of vibrations required to light up the sun, and the practicability of my theory will have been demonstrated. It is difficult for me to give you an idea that you will readily grasp about this question of vibration. In ordinary life our minds do not deal with the figures that come up in such investigations. I have come to the conclusion that the sunlight is produced by five hundred trillion vibrations of the atmosphere per second. In order to manufacture the same kind of light it will be necessary to produce an equal number of vibrations by machinery. I have succeeded up to a certain point, but am still at work on the task.” 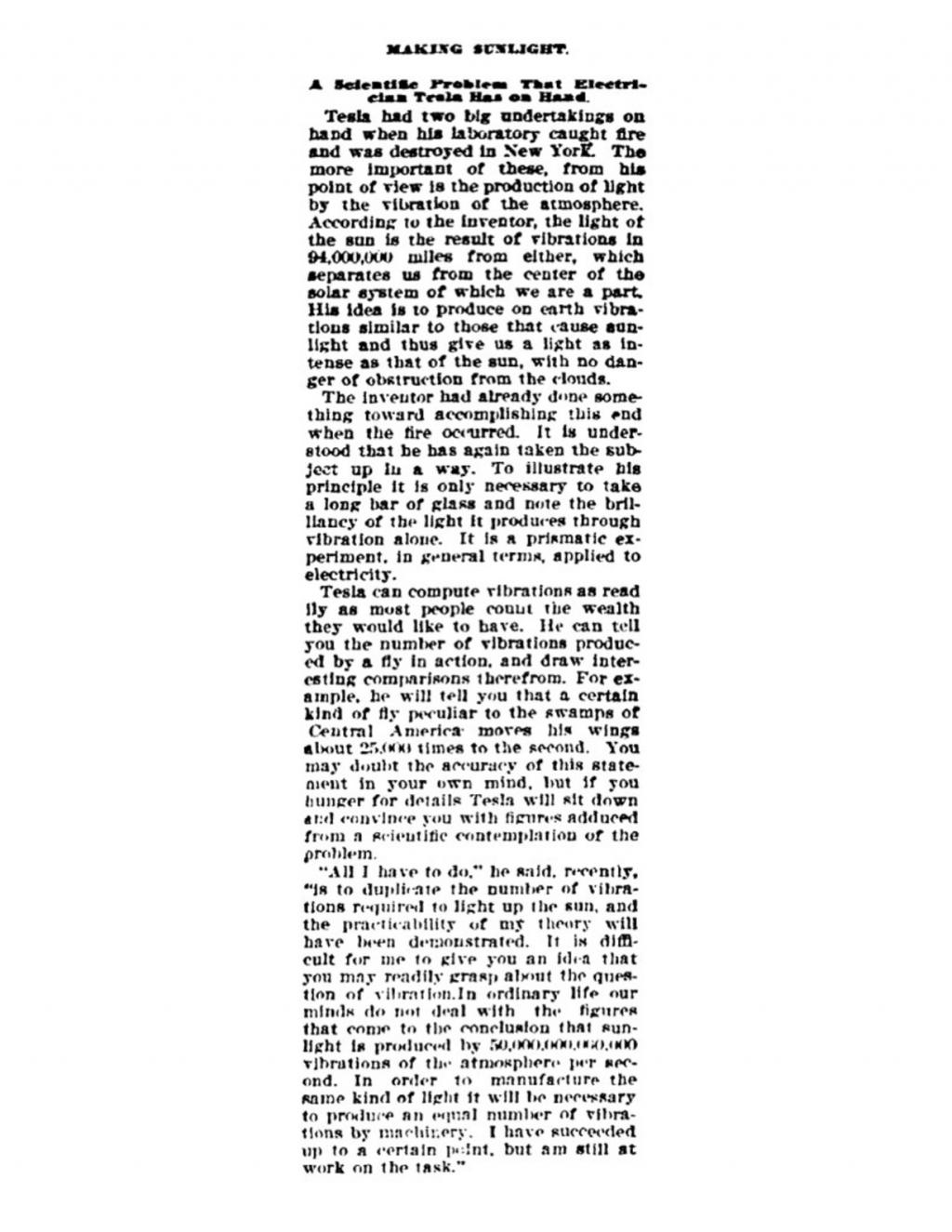