All of the Electrician’s Valuable Instruments Burned.

WORK OF HALF A LIFETIME GONE

“I am in too much grief to talk. What can I say? The work of half my lifetime, very nearly all my mechanical instruments and scientific apparatus, that it has taken years to perfect, swept away in a fire that lasted only an hour or two. How can I estimate the loss in mere dollars and cents? Everything is gone. I must begin over again.”

That is all that Nikola Tesla, the renowned electrician, had to say about a fire that utterly wiped out his laboratory at 35 South Fifth Avenue yesterday and destroyed instruments on which he has made experiments in advanced electricity that have astonished the world. Tears were in his eyes when he spoke.

Ever since Mr. Tesla came to this country from Servia, about ten years ago, and became for a time associated with Mr. Edison in his laboratory, at Menlo Park, N. J., his experiments have been watched with increasing solicitude by almost everybody interested in the progress of electrical science. He has attracted almost as much attentionas “Wizard” Edison himself. The two men are scarcely rivals, for they conducted their investigations on substantially different lines. Personally, they are warm friends. Mr. Tesla never cared to talk much about his work. Few people knew what was going on in the rooms that were destroyed by fire yesterday. About fifteen men were at work there nearly every day, experimenting under Tesla’s personal direction. He worked as hard as his men did. He had a little office with a roll-top desk and a rug but he seldom went near it except to talk to visitors. Most of his workaday hours were spent bustling about in his shirt sleeves among his instruments.

Outside his shop he is something of a Sybarite. He dines at Delmonico’s almost invariably, and lounges about the café during the evening. Habitués of the place know him well. He is very tall and very thin. His dark eyes are perhaps his most noticeable feature. They are large and brilliant, showing with the zeal of an enthusiast.

Lectures given by Mr. Tesla from time to time give the best idea of his hopes and aims. Of course, he does a great deal of practical work all the time, aside from his experiments. He is controlling engineer of the Niagara Power Company and consulting engineer to other corporations interested in electrical supply. But his experiments took up most of his time. One thing that Mr. Tesla was striving to accomplish was to prevent the enormous waste of force in the manufacture of electricity. He has contended that about 99 per cent. of the energy now goes to waste. His experiments have been devoted to saving at least one-third of the energy, which would make it possible to obtain a much greater illumination that can be procured at present, and at a great decrease in cost.

“The ideal way of lighting a room would be,” he said in one of his lectures before a scientific society two years ago, “to produce such a condition in it that an illuminating device could be moved and put anywhere, and that it should be lighted no matter where put, without being electrically connected with anything.”

Tesla has demonstrated in his experiments that the polyphase currents of high potency, even to 250,000 volts, have no hurtful effect on the human body. He allowed that number of volts to pass through his own body without harm. Through his discovery of the means of transmitting electricity without a wire, Mr. Tesla expected to produce a light as powerful as sunshine as soon as he had discovered how to care safely for the 8,000,000 volts necessary for the purpose.

Gillis & Geoghegan, manufacturers of steamfitters’ supplies, occupied the lower floors of the building in which Mr. Tesla had his laboratory. Night Watchman Mahoney was employed to look after the building. He said that he was making his rounds as usual just before 3 o’clock yesterday morning when he discovered the fire. It had started on the ground floor, but from precisely what cause is not known. He tried in vain to put it out with pails of water.

The building was saturated with oils necessary in the manufacture of fittings, and it burned like a tinder-box. Before a line of hose could be put down it was evident that the place was doomed. Chief Bonner and his men could make little headway against the terrific heat. It was so intense that at one time the elevated railway structure caught fire. There was a box factory next door, filled with inflammable material, and every endeavor was made to keep that from going, too. It took three hours to get the flames under control. There are so many ramshackle buildings in that locality that if the box factory had once caught fire there is no telling where the fire would have ended.

Mr. Tesla’s employes were dismayed when they appeared on the scene for work in the morning and found their occupation gone. Not one of them had the courage to go and tell their employer of his terrible loss. He appeared, as usual, about 10 o’clock, and found it our for himself. At first he was simply dazed.

“It cannot be true!” he explained, pacing up and down before the ruins in hopeless despair. He told a fireman that he had no insurance, and that, so far as he knew, the money loss would probably represent $50,000. The loss to the building itself is estimated at $25,000, and the loss to Gillis & Geoghegan is estimated at $80,000. This is covered by insurance. 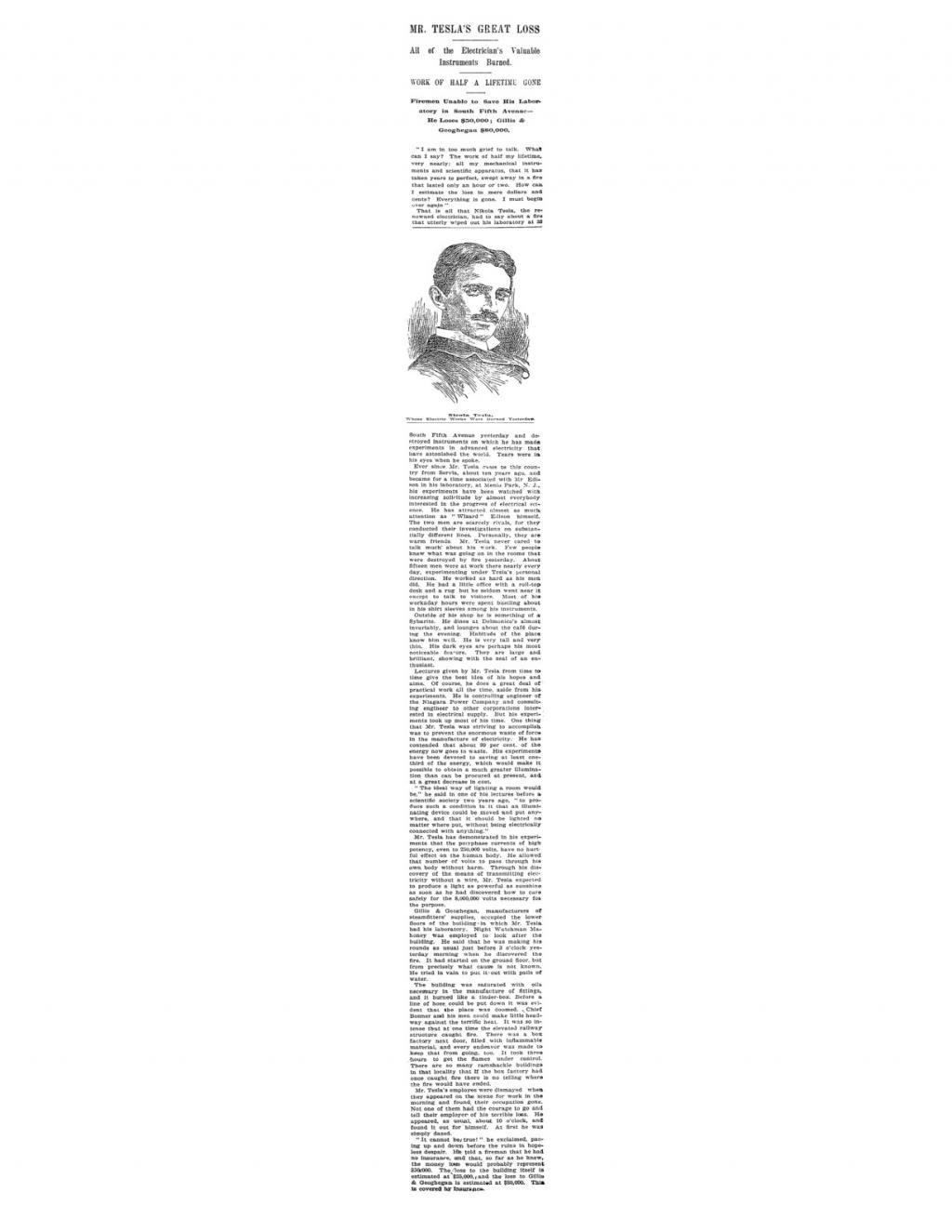